Security issues addressed and Thank goodness I'm not a duck!

After having to "break in" using Eddie's skeleton key the other day... and subsequently discovering HOW easy that was, I set to and got a couple of Shutter locks to prevent the hatch being moved AT ALL.

As we had a few days off before our next guests came on board... AND we were in a relatively private place in the layby (I really don't know how else to describe where we were at the time)I set to to fit one of them.

WHAT a pig of a job - NOT made easier by the fact the "locking bolt) was 13/14mm and my biggest drill bit is 12mm - I only got that to make a big enough hole ofr the solar cables to come in through the front of the boat. 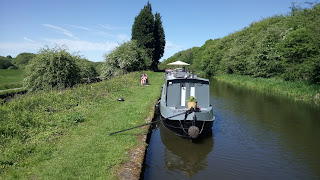 Having press-ganged encouraged Andy to help, we lifted off the hatch (something before my carpel tunnels were done I'd have been able to unaided) and set to fitting the shutter lock. 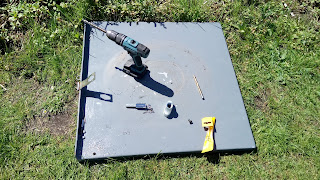 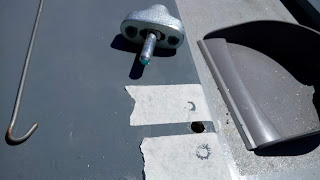 I was having a hell of job trying to get the 8mm in the right place when it dawned on me to stick a bit of tape on the hatch and then use a sharpie (other marker pens are available) to colour in around the "holes" and then press it into position.

Worked a treat.  I had to drill BIGGER holes on the under side to get the countersunk bolts in AND allow access to the allen key underneath to tighten them up.

I also had to bugger about wiggling the too small drill bit preserve with enlarging the 12mm centre hole to 14mm in order for the bolt to go through. 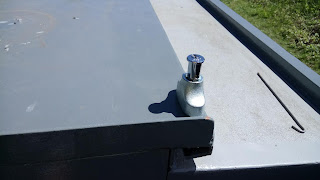 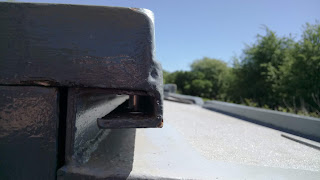 Anyway - once it was done, we lifted it back on and you can see how it works now.  Prevents the hatch sliding either way so it can't be lifted off unless the bolt has been unlocked.

Now I need to fit another lock - probably a yale type, to keep the back doors together and what with the padlocks, that might deter any person of nefarious intent from trying to break in.  Fingers crossed.

Once that job was complete, we sat by the side of the boat and watched the sun go down - only to be joined by a lovely "duck couple"... they were very inquisitive - up until a point when "Mr Duck" decided it was time for some loving with "Mrs Duck"... 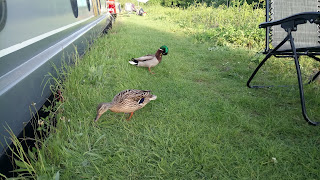 Well I WRITE loving.... it's FAR from loving!  It's funny, but as a kid you never spotted what went on with the ducks... you'd just come across a nest full of eggs and a short while later, see a load of adorable ducklings swimming around with their mother.

It set us thinking - having kept chickens, we KNOW that hens lay "about" 1 egg every 26 hours (give or take) whether they've been "loved" or not... can ducks do the same?  Does one viscous attack = one fertilized egg? ... of course I tried asking google as we walked back to town to buy some stove blacking but the reception was poor so I never got an answer.

Suffice to say, IF there was/is such a thing as re-incarnation, I know for sure I do NOT want to come back as a duck.

Writing of walking back into town, When we rounded the corner near the Windmill in Parbold we spotted a fly boat just setting off. 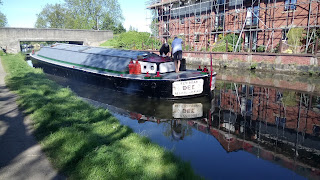 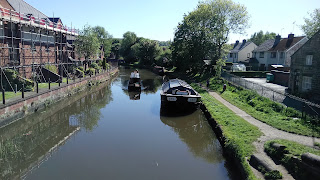 For a large old boat, she looked surprisingly easy to handle and the old couple on board seemed to be thoroughly enjoying themselves.

We're going to head back to Parbold for the "duck race" this weekend - it'll probably be very busy so fingers crossed we can get moored back in the same spot as our previous visit.