Now stop your moaning...  it's been a busy (and at times stressful) few weeks.

YES I know I've been very remiss at blogging... there just hasn't been time (or energy) as I've been doing Dark blue AND light blue jobs.

The quick version is Andy has gone off to spend time with family following the death of both his mothers remaining siblings...

THAT left me at Stanley Ferry "waiting" for the river to go down and arrival of 2 guests pending...

As it stands, it's not so much single handing that's hard work - but having someone competent to take the helm when you need  a wee on the river or whatever... someone you know can just do it without running aground on a corner or panicking if a boat comes towards you lol.  I remember when WE used to panic when presented with an oncoming boat... THESE days, we see how close we can get to them in sort of 16 ton game of "chicken"...

I'll get back to the update...

The river went down the morning our guests were due to arrive... this meant I could race up it and be in position at the Visitor Moorings as planned where both the guests and guest crew, were due to meet me.  HOW posh were we with our own CRT volunteer lockie coming on board for the first couple of days ?

Once the guests arrived (and I'd done the toilet training, man over board procedure and opened some fizzy stuff) we set off in earnest up the River Calder. 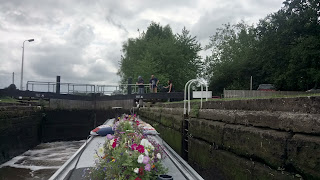 Of course they don't always work when you're faced with a "different lock" so he had to wing it abit... no matter, before long, they got the hang of things and we were making good progress - roping in passers by and other boats whenever the opportunity presented itself lol. 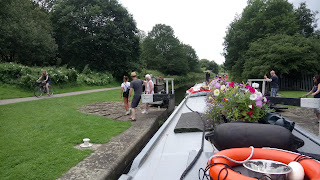 With rain forecast (again) we made a group decision to make a dash for it to get through as much of the river sections as possible - in case we got trapped in by locked flood gates.  Ledgard flood lock was closed but the river was in yellow so we cautiously went through and raced up to South Pennine Boat club where we overnight-ed in relative safety.

Next morning, the sun was out and the river had dropped a little so we plodded on - stopping off for a pint (and lunch on the boat) 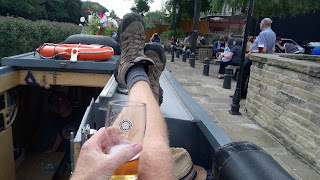 before ending the day at Sowerby Bridge . 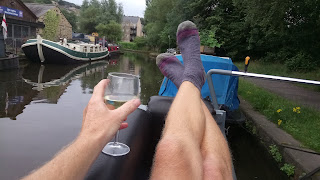 Now the river sections were out of the way, we relaxed a bit and after a couple of hours wandering around Hebden Bridge, we continued on as far as Todmorden.  THIS side of the pennines being truly lovely.

Compared to last year, there was plenty of water but even so, we did go aground occasionally.  NOTHING to do with the guest skipper at the tiller. 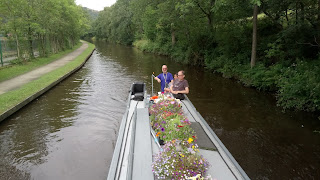 On arrival at Todmorden, we sneaked in just outside the pub and (with nowhere to tie up properly) I must confess to applying a "MLAT" approach - looping the front rope around a cast iron bench!  NOT good form but not a lot else to do really.  It'd been a long day and as none of us could be bothered cooking dinner, we went off to the pub  expecting "pub grub"   - it turned out to be Thai which whilst a surprise, was quite good. 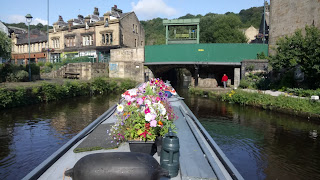 Next day with our guest crew having gone home, the "guests" were flying solo now...  They took to it with glee and we made excellent progress through some lovely scenery. 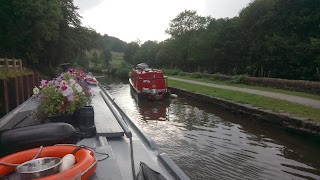 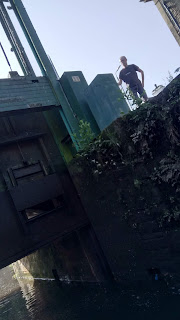 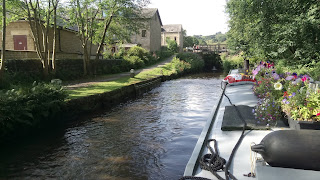 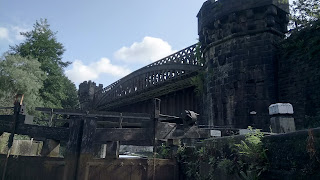 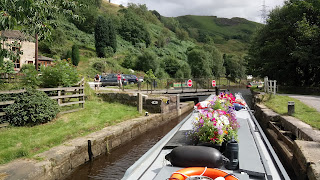 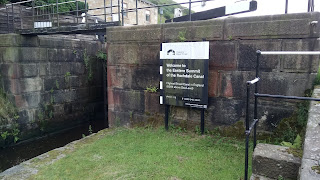 Whilst we stopped for lunch at the summit, I received an email from the couple who were due to join us in Littleborough for the next leg of the journey...  they had some bad news regarding a terminally ill relative and rather than "risk" coming away with us, they'd decided to cancel - they even asked how much extra they'd have to pay for cancelling at such short notice bless them.    The answer was of course nothing and rather than "steal" their (already paid for ) holiday, I suggested they look at next years cruises and pick one they'd like instead... it's only cricket after all and we never did plan to do this to make money... just to finance a fulfilling lifestyle.

With the contents of the email fresh in my mind, I mentioned it to the guests (due to depart at Littleborough on Friday)... AND a plan was hatched that rather than them leave me there, they'd stay on board down to Manchester (they were going to get the train there anyway on Friday) .

This worked out well for all of us - although I did see a Tweet from him that he wasn't sure if it was a boating holiday or an assisted walking holiday (given they walked miles along the Rochdale)...

Ruth even got brave enough to take the tiller... 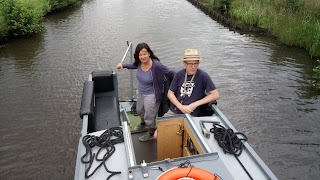 We stopped a short distance away from where it gets grotty and enjoyed a few hours of sunshine - knowing we'd need an early start the following morning. 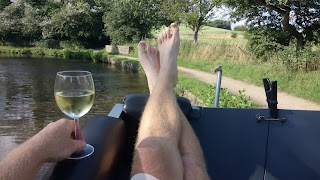 The journey through Failsworth and Miles Platting whilst unpleasant was also uneventful... mainly because the rain kept the scrotes indoors much of the time 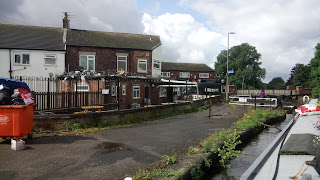 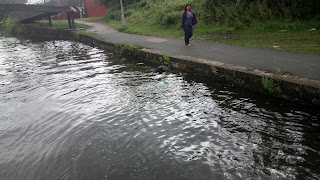 If you look closely, you can see a submerged motorbike in the water just near Ruth...

I have to say, some of the locks are nigh on impossible to open without lots of brute force AND an improvised "Spanish Windlass"... https://s3.amazonaws.com/finehomebuilding.s3.tauntoncloud.com/app/uploads/2016/04/09124726/hb106tp01-01-main.jpg

Once down in to Manchester, we chucked a left on to the bottom of the Ashton canal and hid away for our first night in Telford Basin.. 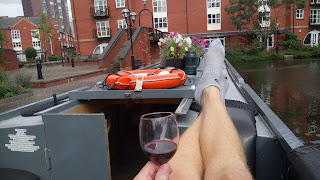 No rest for the wicked though as the guests asked if I'd mind if their son, daughter in law and baby joined us for dinner...  an improvised curry was cobbled together professionally produced and it was lovely to see them all enjoying an impromptu get together...  after tea, I left them to it and sat outside reading to give them a bit of privacy - well as much privacy as you can get on a boat lol. 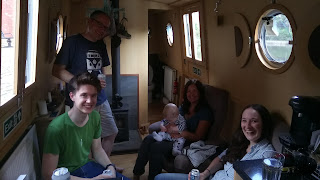 The following morning, we began our descent of the imfamous Rochdale 9 down into Castlefield basin...  The Rochdale just kept on giving - THIS time just as we were going into the first lock, a whole sleeping bag around the prop...  grrr 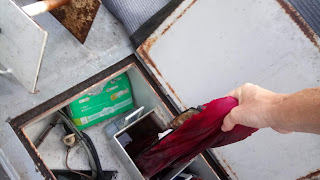 By now, there was so much water coming down the canal from the recent rain, it was time for another Spanish Windlass  which this time also helped 2 boats coming up - that bottom set of gates would never have opened without it. 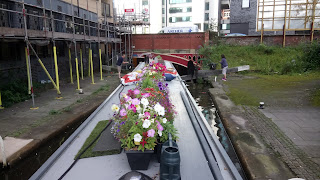 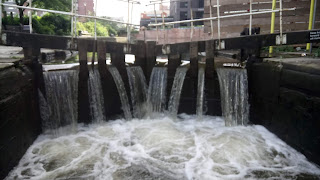 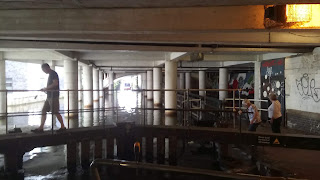 Once at the bottom, we filled up with water and spent our last night together just opposite where the trip boats moor. 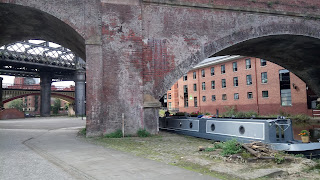 It was here technical difficulty struck... my blooming phone screen died...  and of course when I eventually found an EE shop (the old fashioned way - asking people in the street) a young chap (probably not even with any curly armpit hair) talked me into   assisted me in  choosing a new phone, tablet and mifi point for 9 quid a month LESS than I was already paying... whilst I can't work any of them yet, for once I don't feel ripped off lol.

WHEN I got back to the boat, I decided that as I had a few days to kill, I'd better take up the kitchen floor and refit it... SORRY - I'd forgotten to mention somewhere along the line, we'd had a bit of a flood and resultant "warping"...  I'd heard the cabin bilge alarm going off when the boat rocked side to side (from over filling the water tank again ahem) but it'd been surface water from over zealous washing up /filling the washer with hot water that had caused the oak to expand and pop up. 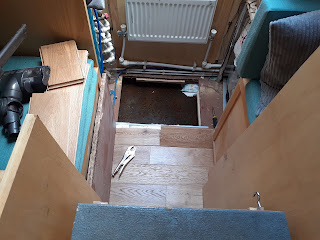 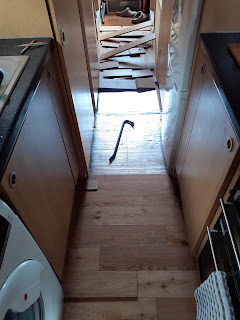 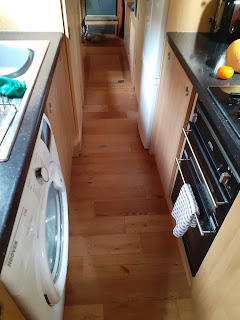 It wasn't too bad - only 1 piece of wood needed scrapping and I was able to get it all back down and dried out in a few hours.

THIS being one of those jobs that being on the boat alone was actually much easier lol.

Now that I'd done that and began getting to grips with my new phone, I decided to phone Stretford Marina (about an hour away) and see if I could stay with them a few days in order to use shoreline for laundry etc... They made space for me and once I'd filled up with diesel and had a pump out, I settled in to my secure mooring for a few days before heading back up the Rochdale 9 - THIS time alone. 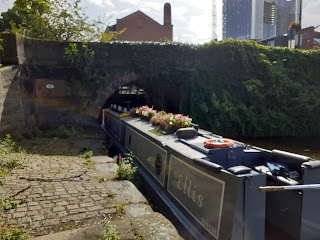 This was the last photo I took before I began...

It went ok actually and I enlisted assistance at various points from both gongoozlers, workmen and even a few Chinese tourists.

Once again I spent the night in Telford basin before setting off up the Ahston the following day... 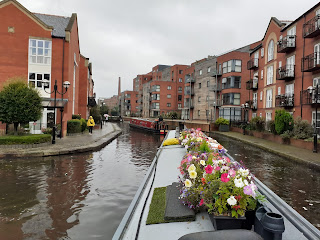 I had a bit more luck though as a couple of boaty mates (with a bit of free time) had offered to come and help me work up the Ashton and lower HNC to get to where I needed to be for the next guests....  rather than come and go on the train, I suggested they stay as guests - They are Vegan and it was my first introduction to Vegan food ... luckily Frankie sent ahead a shopping list for me and we cobbled together a few meals that weren't too bad -- even if a little unsophisticated! I mean, what CAN you do to make cardboard tasty?😆

The weather was NOT kind to us... soaking us pretty much all the way...  as much as possible I leaped off the boat to leave Greg at the helm and pull my weight lock wise with Frankie...  it was a hard slog and at one point we did get stuck in a shallow pound on an tractor wheel - the only was to get around it was send someone up to run some water down whilst we made a dash at it...  I did get the hump with a CRT chap who "knew it was there" but said they were waiting on a 7 tonne crane to remove it... I explained in glorious technicolor that I'd managed to move it out of the way with a pole so perhaps simply tying a rope on it to keep it to the bank might be better than just ignoring it! grrrrr.

Once up the Ashton, we stopped at Portland Basin and the next morning, began our climb up the lower Huddersfield Narrow...  topping up the water tank, I spotted a couple of amusing signs in the toilet block: 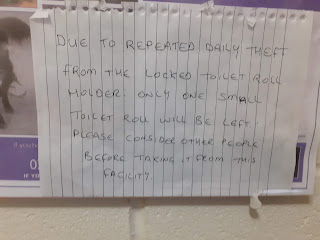 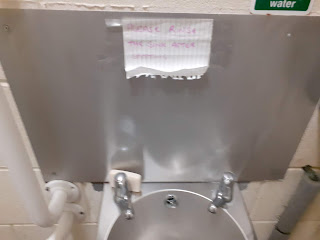 I can't imagine who was responsible for the misdemeanors in the first place as the services are in the middle of nowhere!

So here we are then - at Uppermill a few days early and ready for the next guest to join and go through the tunnel and on to Huddersfield...

Until next time (which will hopefully be sooner than of late)......