1 week in to 'lock down' - actually it's day 6 beginning come to think of it... just feels longer.

Who'd have thought nearly a week ago, we'd all be experiencing (what many consider to be) such draconian measures? -

I STILL GET IT...  I'd have liked a more honest approach to it rather than trying to scare folks into compliance...  I'm STILL only doing what the Government is allowing me to do - despite how 'vague' that instruction was!

Whom ever came up with such an emotive tag line of " Stay home - SAVE our NHS" deserves credit where due - I'm an emotional sort as you may have gathered and as a nation we DO pride ourselves on the NHS - even those who have abused it so many times... the whole idea of being compliant to SAVE it is a brilliant marketed strategy.  Well done that man/woman/trans/non-binary or whatever else we say today.

All this 'Social Distancing' too - another term we'd never heard of until this week... the irony being it's not social at all.  Hey ho.

WHAT this week HAS shown - certainly to me living on a boat, is that there are a lot of vulnerable, lonely, bewildered and sometimes old people wandering around waiting hours for and catching buses - who DO THIS EVERY DAY... they just blended in to the back ground because of the numbers of people around.

'Ellis' has been moored near the bus-station in Skipton (the final place we got to before Boris Locked us in and CRT prevented boat movements (I'll come back to that shortly) - every day at least half a dozen poor souls have appeared (not at the same time) on the bench near the boat and just looked SO lost.  ME being me, have pretty much engaged in a conversation (using aforementioned 'anti-social distancing guidelines) to pass the time of day with them... PARTLY for my own sake I admit... ... but when you stop top think that perhaps THEIR every day is like that, its heartbreaking.

During my 'allotted' daily exercise walk - which can apparently be  of an unspecified duration
but ONLY ONCE, I've also made a point of shouting cheery 'Hellos' to everyone else doing the same - some are stopping to chat about how bonkers the world is ... SOME are zig-zagging away (to obey the social distancing rules) and blatantly ignoring me ... as if to say "This is my exercise time so you shouldn't be outside making it more difficult for me" - that's the message I'm picking up anyway.

LUCKILY MOST are cheerful (if confused/angry/exacerbated) and trying to  comply whilst carrying on some normal life.

Going back to "boat movements for a moment" - I knew when Crt phoned me on Tuesday to ask if I still wanted my 2 bookings through Standedge in May, things were NOT going to be back to normal within Boris's initial 3 week lockdown.   I replied that of course as I'm a business I would HAVE to  continue with my route to ensure I'm in the right place at the right time... EVEN though most overseas visitors have already had to cancel due to travel restrictions in their own countries.  THEN a statement from the trust came out, basically ASKING (not prohibiting as without an act of parliament I don't think they can remove the right of navigation originally invoked when the canals were built )-  I could be wrong about that but it's all synaptic's anyway, BOATERS not to move unless going for Water or other boatyard services...

Various other statements have been coming out extending stoppages etc... a bandwagon perhaps now being jumped on to cover up over-running repairs nationwide - sorry.. I'm going off on a tangent.

POINT is - by Wed (Possibly Thursday) it was clear, 'Ellis' was not going to be going anywhere for a long time.

READING between the lines and from the conversations I've had with CRT, they are clearly expecting a 3 MONTH (not week) nationwide lockdown... ergo, I've had to liaise with booked guests to try and postpone their trips... it's a nightmare - some have paid... some where due to pay... some have had to cancel THIS year all together as their trips from overseas are in limbo.

I must say, without exception, booked guests (especially the returning ones) have been most understanding about it... moving a few until later in the year meant they didn't lose their money - with others I've been able to move their booking fees to next year and have offered to carry them forward to the year after (2022 when I get a route plan done) so as not make things as bearable as possible all around.

Financially, because the "travel and tourism/leisure sector" has been closed down by the government, I'd hoped to be able to get some help...  LOTS Of spouting on the news about 'Business Continuity Grants, Business rates cancelled , Loans etc - and of course the latest 'Help for the self employed'... WHICH for a fledgling business like this is NO use whatsoever...  you see, they used the words "Profit" as qualification for "help"...

I'll be perfectly candid here - 'Ellis' was NEVER a way to get rich... it was a way to sustain a lifestyle and just about pay for it...

YEAR 1 - we only had a handful of customers as no-one knew we existed and reported a LOSS ... which was OK as I had redundancy money to live off...

YEAR 3 - Cancelled for the foreseeable due to Covid 19

ER - how can I make a claim for 80% of average profits over the last 3 years eh?

I can't to put it simply.

NOW OK...  I can survive - BUT only as a result of accommodating guests transferring to later trips, keeping spending to an absolute minimum and rocking up credit card debts if this goes on for more than 3 months.    I have enough credit available to  keep the ship afloat (literally) and compared to some folks, have a much simpler situation with only self survival to worry about - I SO feel for the other struggling businesses forced into closure  - supposedly temporary who still have staff to think about, their own bills to pay and no immediate light at the end of their tunnels.

Still, we're all in this together so we're repeatedly told...  although at 3 am when the demons wake me up, it doesn't FEEL like we're in it together lol.

Anyway - enough about all that...

I've  'processed' my sulking (for now) and will carry on doing jobs... I still have the roof to paint and apply more non-slip stuff to ... I'm ALSO going to learn Sign language .

Skipton IS a lovely place to be stranded in... although without "people" it's rather sad...  My daily exercise walk will continue to be around the woods and I'll join the 2m apart queue around Morrisons car-park as and when I need to buy things... luckily, I have the boat quite well stocked in preparation for the guest season... I expect to be working my way through the gin stocks quite quickly though.

HERE is a quick snap of the first ducklings I've seen of this year... 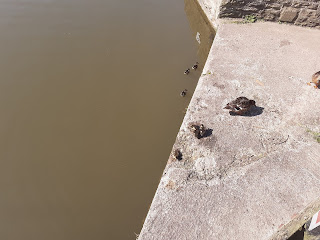 Glad to hear you are alive and afloat. You are a bit Like me ergo used to living alone though it can be a bit boring. Much the same here though I think we are little better off but very strict movements to try to keep it that way. I am wondering at my bucket list trip for the grand national next year but rest assured I want to do it sometime before I get too pottery. Spoke to Lois yesterday, she is well but very bored too. Getting some jigsaws tomorrow as watching corona updates on tv is getting hard to take all day. We in Collie had our last trotting race meeting last week but it was a bit eerie with no crowd! Keep your spirits up as there is always cousin worse off!
Regards peter

Thank you for keeping us up to date on where you are and how you are. Technology is proving its worth in these strange times.

I know exactly what you mean about the bus stops filled with OAPs. Since I never drove while I lived on NB Valerie, I too used to sit among them and chat while waiting for the bus. Often I would spot elderly women dressed in good clothes, stockings, pleated skirts, nice shoes, good wool coat, and hat, hair arranged nicely and a bit of lipstick on for color, with trolley in hand. They were off to market or the shops and one could tell by the care they took with their appearance the trip was the highlight of their week.

Hi Mark, hope you are well. Skipton is a fabulous place to be marooned. Am jealous. We should have been on Boheme now enjoying a holiday. Like you, the immediate future is a bit daunting for us self employed. So much time on our hands and no money. Anyway just wanted to tell you I too have enrolled to learn sign language. Go on their website . There are a few payment options but basically less than £25. Online learning whenever you want to do it. One day in the future we will pass and we can sign. Make sure it’s appropriate though lol. Take care xx