There's not a lot of point in reading blogs at the moment - well not those written by folks like me who need things to "do" to be able to write about something...  I'm not good at sitting around doing nothing.  Like I already said, I'd just DONE 5 months of self isolating and chore doing in preparation for the boating season.

THAT said, I have not been entirely slob-like of late - accepting the current situation is totally beyond my control AND that debts are going to have to build up this year (again), I thought I'd see if I could get some welding done and take the opportunity whilst the boat was out of the water, to do the blacking (which was planned for the end of Oct in Stone) now.

Trouble is, with social distancing "rules" (well actually isn't it a 'Guidance'?) whilst the boat was up on the lift at the boat yard, because other folks live there and it would mean being too close to them, I couldn't stay on board.

Rewind a bit - whilst walking along the towpath the other week (ignoring the "use of towpath must be limited signs" as I'm on a boater and LIVE on a boat - ergo the tow path IS for ME), I walked past some holiday cottages with a phone number in the window...

SO , after discussions with the boat yard and a potential agreed window, I phoned to explain my plight to the lady who owned them.  She was sympathetic and whilst not allowed do rent out her cottages other than to "key workers", she thought a friend might be able to help with a smaller cottage in the centre of Skipton and gave me her number.  A call was made and an explanation that I'd be effectively "homeless" for the duration of the work would allow a work around (sensible shades of grey).   During the conversation, I mentioned I was so looking forward to a soak in the bath as I MISS bathing since living on the boat - to which she apologized saying HER place only had a hip bath but she'd have a think....

A while later, the phone went and I was given another number of a friend of hers who also has a cottage WITH a big bath lol.  I'll fast forward here, but the outcome was it belonged to a BOATER I'd met last year not long after Andy had walked off the boat mid season (and she may have remembered me having a tearful day) - a very kind offer of use of her (empty of course ) holiday let in exchange for a clean through...  I jumped at the offer and subsequently spent 4 nights up to my neck in bubbles...the cottage was charming - well appointed and overlooked the Springs branch of the canal.

I'd forgotten the luxury of a dishwasher and unlimited power/water/heat at the flick of a switch. 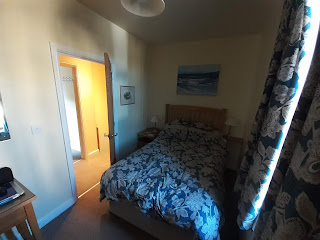 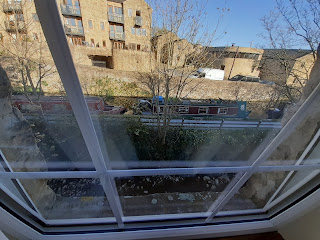 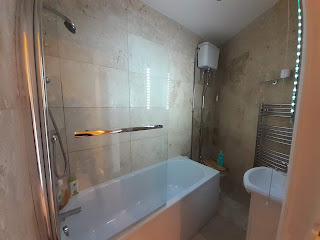 I haven't asked her permission to advertise it here so if anyone is interested, please drop me a message to mark@narrowboatellis.com and I'll let you have the details - I'm afraid I don't know how much she charges for it.

What made is "special" (for someone a bit emotional like me) is the fact the owner is also a boater and took me at my word and trusted me to let myself in and leave the place as I found it.  Suffice to say, I took the bedding back to the boat to launder and then return it when I got the boat back.

WHILST 'Ellis' was up in the air being welded and blacked, I also received another kindness - ONCE Again from a boater... you see, I broke a tooth the other week and whilst initially it was bearable, when the rest of it collapsed a few days later, it revealed a rather big sharp bit and became very painful.    Trying to find an emergency dentist at the moment is nigh on impossible but once found, trying to get a car hire was ALSO impossible.  Having this discussion with the boat yard boss man (Ian at Pennine Cruisers) from a social distance of course, he offered me the use of one of his vehicles.  Even said it was full of fuel and no need to top it back up... HOW kind was that?  - (of course I did fill it up and give him a couple of bottles of wine as a thank you).  The trip to the dentist was uneventful and I now have a temporary repair... unable to use drills or suction, a 'proper job' was not allowed - the NHS instruction being to remove molars to end the pain rather than attempt to save them at this time...  HARD to believe in the UK in the year 2020!

Still, (for now) I have a 'better than nothing' repair which I hope will last long enough for them to be able to sort it properly -WHAT is the point in paying a denplan for 20 odd years if when you actually need to use it you can't?

Anyway - here is a photo of Ian reversing Ellis back to the town centre for me.  He managed NOT to scratch the new blacking... however the next day, some mad woman crashed into me whilst turning and did just that... BEFORE I'd even managed to scratch it myself lol. 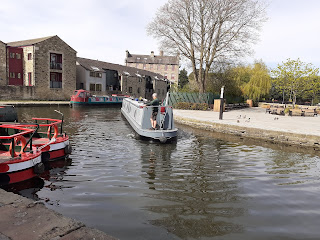 Having a smart black bum has motivated me into finally painting the roof and applying some more non-lip stuff...  I forgot to take any photos but tryst me - it's done and much better than before.

Yesterday (28th) I spotted a notice from CRT - it basically  said they have closed the Leeds and Liverpool Canal from noon yesterday until further notice - due to lack of water... ergo, even though barley a boat has moved in the last month - they have kept drawing water from the reservoirs to wash into the becks/rivers from the by-washes/overflows and now there is a shortage!!!

Make of that what you will...  a few words spring to mind - incompetence being one of them.  What this means is that even if Boris unlocks us at the next review, we STILL can't move anyway as the whole lot between Bingley and Wigan is closed and padlocks... it sucks...  It's bad enough having lost 3 and a half months of the 'earning season' already but not to be able to actually GET the boat to where it needs to be to begin operating again (when we are allowed to) is pants...

I've a suspicion CRT will just concrete over the entire canal before long and it can become the cycle way it practically already is.

Until next time...
Capt 'disgruntled' of Ellis...

Hi Andy, I feel the frustration - what I am trying to do it counter such as you have done in your post with concentration on the good stuff that is happening around the country as well as more locally to you directly with the acts of kindness and faith. So keep the faith, it's hard bit ultimately it's what will get us through this stage of history ! Take care

O dear I apologise and hope I did not cause any offence! Keep smiling and enduring, hopefully you will get a part season. I firmly believe any business that operates holidays in the UK will ultimately benefit as less people will want to fly fewer countries will accept as many flights and the travel insurance for going abroad - especially post Brexit will make a staycation a real option. Once people talk up their positive experiences of a staycations it'll feed itself and boost our own economy. I for one am planning my holidays in the UK (we really only ever did a big holiday every four or five years) but looking forward to extended use of Percy as well as travelling by motorbike to Scotland, Wales and Ireland. There is always a silver lining, just got to look for the glint !