Righty ho - After Lymm, we made our way on to Stretford Marina (booked in for 4 nights) where the delivery of a new Fridge-Freezer had been arranged.  If you've been reading this twaddle since the beginning, you'll be aware after my energy audit back in the  planning stages,  I'd convinced myself a 12 v offering was the only way to go for a live-aboard.  I stand by that decision... HOWEVER, the Inlander 50/50 12v one (that cost over 600 quid) does have a flaw ... that being there are no little lips at the back of the shelves which means when the boat is moving, things can easily end up pushed against the cooling plate at the back... what then happens is it stays ON - trying to freeze whatever is touching it.

Given Ellis's 'hotel ish' operational requirements, the fridge is often completely stuffed full of enough fresh food for 4 adults for  a week.. and what with it not being a particularly large fridge it's nigh on impossible to keep things from the back of it - ergo, the battery consumption is quite often much more than the quoted 2.1ahrs.

Enough was enough - with a visitor looming I made the decision to replace it with a mains powered -larger one. Having roughly worked out the power consumption and conviced myself using the invertor's "power save mode" ther'd only be about 25 ahrs a day between the 2 and given Ellis runs the engine 6 hours daily with guests on board AND the 600 watts of solar, we'd be ok.

hmm- I'll come back to that in a bit!

Options were limited - mainly because of the depth available due to the tumblehome.  The max squeeze inable, was 54 cm deep, 55 cm wide and 167 cm tall.... AND that would require relocation of the Microwave.

In the end it came down to an indeset or Hotpoint - neither make particularly good but hobsons choice dictated the only one in stock - Hotpoint...  Delivery came from AO.com and to be fair, they came the agreed time and wheeled it right to the boat - PASSING the fire-brigade doing  a test of their equipment and plonked it outside on the floating pontoon.

By this time, We'd already removed the old one  and it was in the middle of the saloon keeping stuff cold until the new one had settled and could be turned on...  a simple enough job you'd think.

Well you'd be wrong there - the idiots at both AO.com AND Hotpoint seem unable to quote the correct dimensions... the 54cm depth one in particular...  that figure EXCLUDED the cooling thingy that protrudes from the rear by an additional 3 cm...  GRRRRR,

Of course we didn't discover that until AFTER we'd faffed around changing the door opening side on the pontoon (in the rain btw) and then getting it wedged in the rear dinette!

I  might have had a bit of a temper tantrum swearing and cursing at both AO And Hotpoint  Many blue words were spoken and the only thing to do was (by now in the smallest space available) remove the doors totally, along with the brackets top and bottom  and also the larder cupboard door opposite to make another 2 cm wiggle room.

As you might imagine, this took a long time, required borrowing an 8mm spanner (mine being under the doors already removed which were laying on top of the dinette storage boxes.

ANYWAY 3 hours later, it was in position.  It STILL sticks out more than I'd like but there is nothing I can do about that now...  In the winter, I'll take the larder door off, cut an inch of the long side and make it flush fitting rather than surface closing if you get my drift - this will give another 2 cm (ish) of walk by space  AND make it easier to open the door flaps on the freezer.

Still, it's positively cavernous  compared to it's predecessor, quiet as a mouse and very very cold.  The down side being the invertor "eco mode" thingy, refuses to kick in cause even when the compressor ISN'T going, it still draws JUST enough to keep the invertor on full power mode... which means if the batteries as 100 percent at the end of the day, by morning they are down to 55% which doesn't sit well with me.   The microwave now sits on top of the tumble drier in the larder cupboard.

The solution to that is to have the fridge on high all day, bung a couple of freezer blocks into it at bedtime and turn the invertor off until morning - the result being the freezer remains about -20 degrees and the fridge by morning, is about 4 degrees... which is fine - it's supposed to be "power loss safe" for 16 hours.  It's a bit of a faff but there is NO way I'm gonna try and remove it now unless it breaks!

Moving on -  once everything was tidied away, my dear friend Richard came to stay and come on a trip with us back down the Anderton boat lift.  Unusually, he came alone as his other half was practicing for an upcoming cello exam and 4 adults AND a cello on a narrowboat would have been a bit of a stretch lol.

We had a lovely trip to Lymm in the  afternoon- dragging him out for his first pub visit in months now that they are open again ... to be fair, the Golden Fleece  had a one way system in place, well spaced out tables and "app" ordering so you didn't need to go to the bar.  After a couple drinks in there, we retired to the boat in our respective "socially distant" areas and continued our journey the next morning to Anderton. 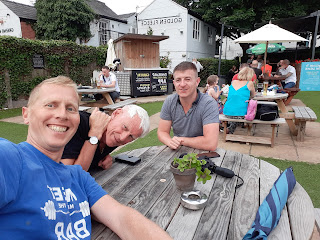 YES I know I'm getting too fat again - I'm back up to 13 stone 6 again...  It's all that lock down rubbish at the start of the year that did it... well that and gin but we wont mention that!

We arrived in Anderton a little earlier than planned , so went on to the Broken Cross for an exploratory wander, then winded and returned ready for our booked passage down the lift the next day.

Once down the lift, we chugged back up to Northwich and quite by chance got a message our friends from Rog and Jane to say they were in the pub if we'd like to join them for a lunchtime libation - well it wouldn't have been rude NOT to and it WAS a lovely hot day so taking shelter from the mid-day sun seems sensible. 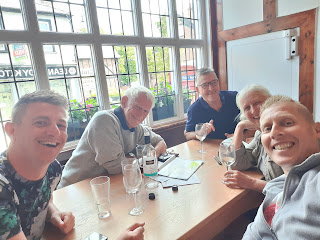 We were moored opposite the Marina which was actually quite a nice spot - if a bit shady later on due to the houses/apartments blocking out the sun.

Next morning we went back up the lift and then retraced our chugs to Manchester and spent our final night in Castlefied basin... not an uneventful evening as the bloke in the boat behind asked if I'd help him carry his dog to his car to take to the vets.  Said dog, turning out to be a 10 stone Rottweiler on it's last legs poor thing... the dog didn't return from the vets.  Awful.  Still, I did have chance to change the oil/filters so that's that job done for another 200 hours.

No idea if this would work but what happens to the inverter if the fridge is turned off at the plug/socket?

If the inverter drops to eco mode would it work by fitting a timer like this https://www.amazon.co.uk/Electronic-digital-mains-Socket-Display/dp/B002P7RF9A
and setting it to turn the fridge off at 11pm, give it a boost at 2am for an hour, then off to 7am when back on.

Hi There, we have a 240V fridge, though no freezer part. At night we just turn it off and back on when we get up. It works best when it is jammed full as it retains the cold. If there is room I just fill the space with cans of beer etc and they act like freezer packs. It is always cold in the morning and we have never lost any food etc.
Hope this helps.
Tony and Helen.

On some inverters you can adjust the sleep cutoff point, so you mat be able to raise it above the electronics, The problem then is without the electronics being live the stat probably wont call in main power. So basically you are a bit stuffed