A Week on Holiday in Skipton...(well, avec chores)!

In theory - we're currently "on holiday" in Skipton for the week - you'll recall, because we didn't know whether Burnley would re-open on the day it was supposed to, we blanked the trip from 18th June off ... ergo, until the next guest arrives on Tuesday, we're theoretically on holiday.

In true "Holiday style" - the weather is changeable...  somewhere in between torrential downpours, balmy sunny spells and moist and muggy - I believe when we were kids, THIS used to be referred to as summer.

It's OK though - I've had chance to give a lick and a promise to the the starboard side above the rubbing strake - touching up the worse scratches (done by the protruding brackets on some of the lock gates on the Caldon) and then, once they were covered, give the whole side a "thin coat" to blend in the original paint with the newly mixed colour... which invariably didn't match.  It's nnot work to be proud of I'll grant you - but as someone I know used to say "It's close enough for a country spot" lol.

Whilst in with the painting, I also gave the rubbing strake/strip a new coat of blacking to tidy it up ... even though the bit below and around the water line could really do with some too, it still looks a whole lot better.    I tweeted about this the other day, but being a boater DOES really remove a lot of inhibitions - I mean here we are moored in the centre of Skipton and I feel no embarrassment at all about erecting the mobile whirlie gig and drying laundry ! 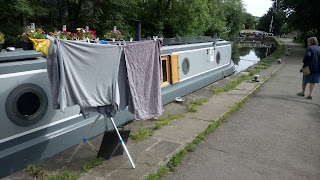 Having HAD those pants (a long time ago) stolen off the line in Stanley Ferry, I now "hide them" behind larger - more difficult items to pilfer!

So that's the starboard side tidy - we need to move the boat so I can do port soon - perhaps today in fact if there is a space further around opposite Pennine.

Skipton has grown on me again and having gotten over the initial sadness about being here again, I've decided it STILL has a lot going for it - a side from the surrounding beauty, it's full of nice folk... AND Morisions has the reverse-vending machine (trialed last year) although now it only pays 50 points per bottle/can instead of the 100 it initially did - Still, it has put another £5 voucher in my wallet and I've done my bit again. 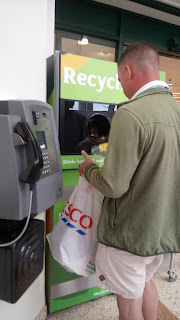 Whilst here without guests, I also finally got around to a  jobby I've been putting off for some time - replacing the pipes on the toilet holding tank - it's a crappy job (:-)  but after a period, they become porous and slight whiffs begin to appear... a side from getting hold of some ridiculously expensive hose from an online company - (difficult when travelling around and not knowing how long it''ll take) I've had to replace it with like for like (which should buy me 2 years again before I need to replace it) which WAS in stock at the boatyard.

If I'd been more organised, I'd have had a pump-out FIRST but because the tank isn't even yet half full, the tight arse in me economically sensible part of me, decided that would be a waste of money so I'd "tape off" the pipe work as soon as I removed the old stuff.

That was easier said than done - I started with an easy win - the vent pipe and charcoal filter... they being the "clean end " of the system...  you might recall if you were here at the beginning,

http://narrowboatellis.blogspot.com/2017/02/macerator-er-toilet-fitting-crappy-job.html#
I'd ran out of pipe so cobbled together a bit of a bodge - siting the filter under the bed.  This position however was vulnerable to... lets call it "fluid" finding it's way into the filter housing when the boat rocked - THUS dissolving said filter... not ideal.

ANYWAY - it's now re positioned in a more accessible place . 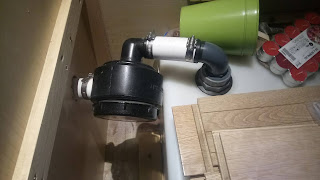 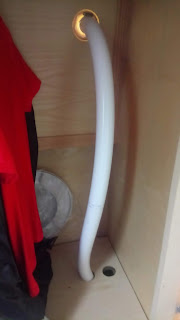 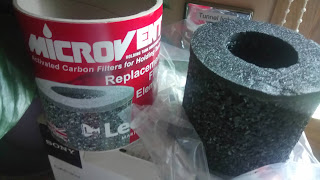 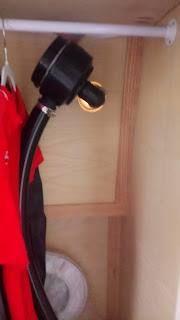 That was phase one - by then I'd had enough of clamber around in a small space... my back was aching so I left phase 2 for another day.

Unfortunately, Yesterday WAS that other day...Time to do the dirty end of the system...  AND the main culprit for the whiffs - the section of hose between the loo and the tank - you see, it has bit of a "u" bend in it which means "stuff" stays in the pipe - not ideal but I can't think of any way to avoid it.

Anyway  - having taped up both ends with a plastic bag and miles of tape, said pipe was removed and replaced... along with the rinse out hose AND the pump out hose.  It's all done now and once I touch up the paint work on the gunwales, no one will ever know it's been fiddled with. 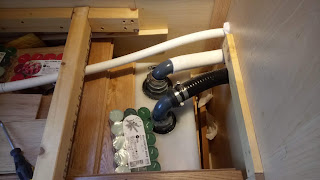 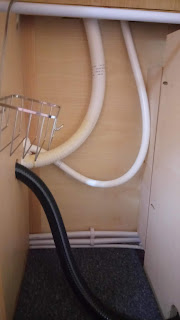 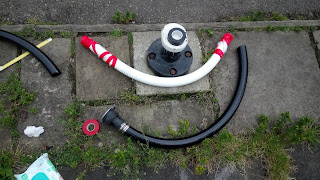 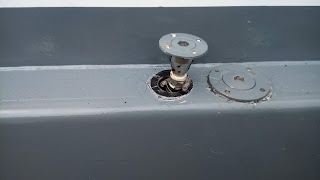 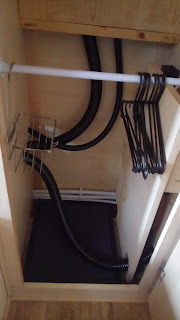 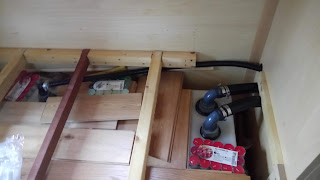 Hopefully it'll be another couple of years until it needs doing again.

To end a day of unpleasantness, I also replaced the "grass matting" at the rear - I know it's NOT natural looking to have a lawn at the back of boat, but it DOES actually reduce the slipperiness of the whole area - especially useful for some of our guests... I really don't want to have to put our "Man overboard procedure " to the test... (said procedure involves 3 steps:  Get camera, take photos and then remove person from water)... actually 4 - "post aforementioned photos on the blog/twitter lol.

I cut up an old door mat and sika-flexed a couple of strips down the side to reduce the amount of water that floods into the bilge when going down leaking locks... I then sika-flexed the matting to that and the weed hatch cover (to stop it blowing away but allow it to lift up with the weed hatch) and there we are - much less clumsy than leaving a bag of coal to stop it flapping around - ahem, which has been the current method for far too long lol. 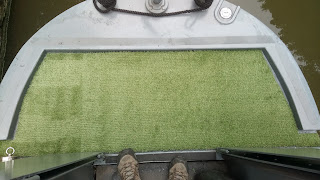 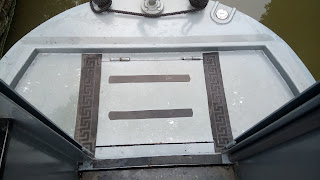 As I type this (Thursday morning) the sun is shining, the washer has nearly finished a load of bedding (on the batteries as I filled it with hot water from the calorifier) and the smart-gauge is still showing 74%... and rising now the sun is getting higher.   I'll have a wander around the corner and see if there is space outside Pennine - if so, We'll move and then I can touch up the port side paintwork as mentioned... if not, well I got a new book at a charity shop the day before yesterday which I'm quite into  so I'll sit and finish that instead... we can always move tomorrow.

THAT said, I would like to have a pump-out to "test my connections" before the tank gets any fuller so perhaps the book will have to wait a while.