Back to Back trips suck...

Well not the trips as such, just the shortage of "days" in between them... 1 day minimum is normally tough enough but on 2 occasions, I've only same day change overs (due to me being amenable when asked to squeeze in a trip on planned 'down days')... I can't complain because they HAVE been my own doing...

Rewind a bit -  Having left Rodley with the Ozzies, the weather deteriorated rather considerably... in fact it was bloody awful - wet and windy and the trip up to Saltaire was grim at best.  Peter and I worked well together though on the locks in the rain and we tied up on the visitor moorings in Shipley (for the night) before moving on to the 6 hour ones in Saltaire the following day... Peter now taking the helm and realizing how difficult it can be to stay in a straight line! 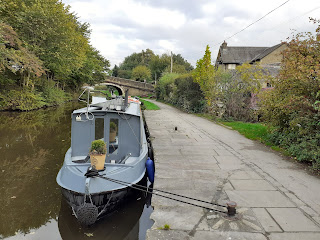 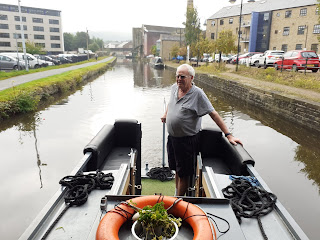 After a day to explore Saltaire, we chugged on up Dowley Gap locks and moored for the night outside the Fisherman's pub... WHERE Peter and Lois insisted we went for tea - their treat...  who am I to refuse  a night off cooking! 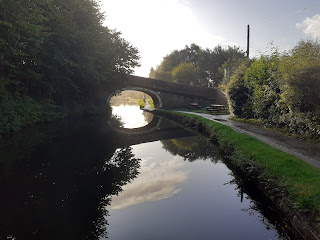 It was actually quite nice grub - decent portions and not too expensive either... 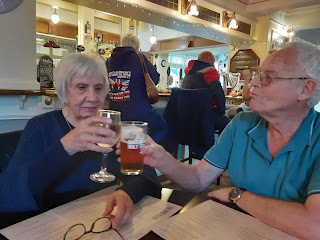 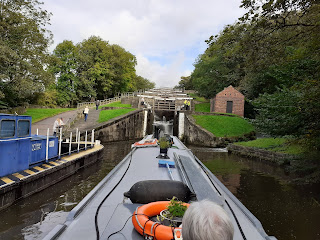 Once at the top, we moored up and this was the end of their cruise  - they heading off the following morning for a trip down to London and subsequent flights home to Oz... I did make a bit of an effort and cobbled together a nice dessert for us (We don't normally have "pudding" ) and it was well received. 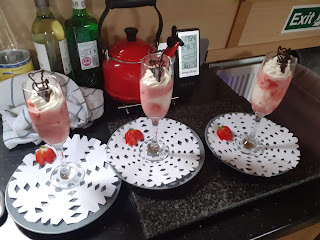 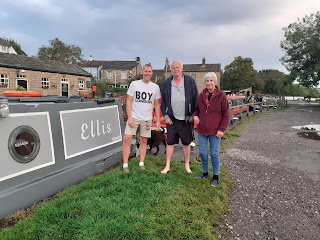 We'd had quite a nice time - and our conversations had covered everything from Brexit to Euthanasia - the latter being something of rather high importance to Lois.

I asked her if I could mention this in my blog as I found her views on it most enlightening and fascinating.

You see, this lady is in the early stages of dementia with her short term memory getting ever worse... as a former nurse, she knows what's coming... and at 79, she has decided to take steps to prepare to end her own life when she no longer feels useful... either to herself or anyone else.

She's talked very candidly about joining the Australian version of "dignitas" and also gathering together the drugs we will need to "end her own suffering" before she gets to the point when she can't.

Initially it seemed a most uncomfortable area of discussion but when you stop to think about it, it does actually make perfect sense...  During the trip, she'd asked me to take a few photos of her for her "funeral wall" - which is a 'thing' they do in Australia...  put loads of photos up at funerals to show different stages of her life ... to some extent I suppose we did the same with my mum - my dad cobbled together a collage of photos of mum"through the ages" that sat on a table at the bun fight.

What particularly stood out, was the ease at which her and her old mate Peter talked about it - her deteriorating memory and at no point were our discussions morbid - perfectly matter of fact and at times very funny.  She wanted to help with cooking and washing up etc and as a result, 4 of my 6 long handled teaspoons have "gone missing"...  they may be wrapped in towel or for all I know, now safely back in Oz in her kitchen... no matter...

It's made me think that rather than that vote on Brexit Mr Cameron screwed up on, we'd have been better off having a vote on legalizing assisted dying in the UK - we don't let animals suffer the same way we do our  oldies...  AND at least a referendum on Euthanasia is something the electorate would have actually understood!

Anyway - Lois is still hoping that the Oz government actually approves the bill before she HAS to take matters in to her own hands..

It's a funny old world.

So - they left after breakfast and I had "my day off" - which consisted of 4 loads of washing/tumble-drying and 5 trips up and down the hill from Crossflats to the supermarkets in Bingley...  easy walking DOWN the hill but less so on the return weighted down with shopping.

Bingley is actually a better town for shopping than I thought - it's just he walk up the hill that spoils it.

Once the shopping and laundry was completed, I cleaned the boat and ready for my next guest who joined me the following morning...  When we headed off towards Skipton and then to Gargrave.

I had the best holiday ever in the week we had with Mark aboard the good boat Ellis! Mark was the best host you could imagine even when I had to be stopped doing something on one of the locks with a very loud and sustained horn from the boat below. One of the many fascinating things I learned about in narrowboating. I would love to come back and crew sometime in the future! Marks ability to whip up meals for the day before making us breakfast was astounding. Oh and his banana pancakes for breakfast were so good. If you want a perfectly relaxing (or not) holiday Ellis is the place to head to. Conversations with Lois and Mark and myself covered everything imaginable and had us in stitches at times even though they picked on me unmercifully! Mark,keep up the good work, I am sure you will have lots of repeat passengers. Thanks Peter

Thanks for that lovely comment Peter... it's greatly appreciated... NOW - if you could just go through Lois's luggage and check for the missing 4 long handled teaspoons that would be icing on the cake lol.

We have known Peter for about thirty years since we moved to Collie where we both now live. We have just caught up with him at a funeral of a mutual friend. He raved about his holiday with you and of course we now have something very special in common with him as we have been travelling on the "cut" since 2006(hiring) and since 2015 on our own boat Lazy Bee. Harley & Shelley

Peter (and Lois) were great fun - a little bit shy of washing up but I suppose he WAS on holiday!

I'll keep a look out for Lazy Bee but please give me a shout if you come across me - Next ear and beyond, I'm heading a bit further south ... probably going to spend a while longer on the Llangollen canal and then the year after, have a look on to the Kennet and Avon... to see what all the fuss is about lol.