GOOD luck for a change...

Righty ho... 'bless me father for I have sinned - it's been WAY too long since my last confession post'

Here we are then... a fair bit of time has elapsed but things HAVE actually gone well and Karma has finally restored the balance somewhat!

To bring you up to speed,  you last found me 'sulking' when I bent the Skeg in Gargrave locks...  undeterred, the guest (a solo lady traveler) and I carried on to our final destination which was Nelson.  I was pretty much single-handing all the way as due to the size and strength (or lack of I suppose) it meant she was unable to do much crew work - no matter... I just got back into the routine (after aforementioned skeg incident) of taking things slower and being more methodical ... it IS perfectly dooable (swing bridges a side on a windy day) and is STILL the best (non) job you could ever wish for.

The journey was really autumnal and we encountered some lovely early morning mists up on the "curly Wurlies"... 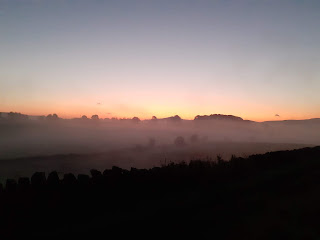 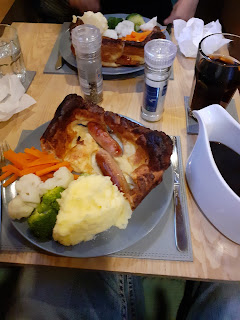 We made good progress "up and over" the top and because of the break in the weather, I was even able to do a bit of touching up port side before we began our descent of Barrowford Locks into Nelson. 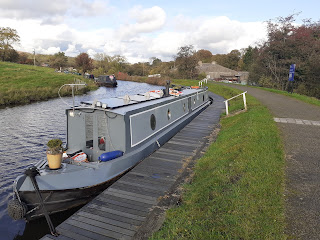 SOON to be scraped off again but if you don't keep on top of it, the boat just looks messy ALL the time (rather than just most of it).

On arrival at Nelson (which was to be the final guest changeover point) we were lucky enough to get moored for our final night on the secure (ish) mooring behind Morrisons - secure but noisy as it turned out the local "yoof" gather in the car park in their cars to play bloody awful boom boom music and take drugs socialise!

After a loud night, we said our farewells and I continued on to Reedley Marina where I'd booked in for 2 nights (given the alternator wasn't back and I had the usual 5 loads of washing and drying to do - being plugged into shoreline was a better plan than putting such a strain on the starter alternator and using the genny to top up etc)...

The only mooring available was the online one near the diesel point ... it WAS blooming expensive though - they charged me £48 for 2 nights stay - treating it as 3 days because it was technically 2 nights and 2 hours... grrr  AND I needed to pay another 10 quid for electric (which I won't have used up)...  - just felt a bit tight of them but hey ho... it's a business I suppose. 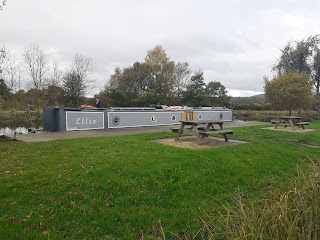 As visitor moorings go it was ok - just a bit annoying that the residents tended to gather on the benches outside the boat and smoke... it's their home I suppose so I just has to suck it up and make the best of it - They WERE a really nice and friendly bunch which distracted me from the ash tray smell wafting into the boat lol.  I did notice Lady Teal (the proper posh hotel boat) was already tied up for the winter there - I did keep a look out for the owners to say hello but they were no where to be seen... perhaps next time.

My final guests of the season arrived at the boat earlier than planned which was good and once we'd dismantled a wheel chair to make it fit in the rear locker, it meant we could set off and work our way up through Barrowford locks before nightfall - spending our first night together moored in the same place I'd just touched up the paint work a few days before... alas, it was TOO chilly to do the starboard side so that remains scruffy looking lol.

The weather was much kinder than of late as we made our way through Foulridge Tunnel and on to Greenberfield locks . 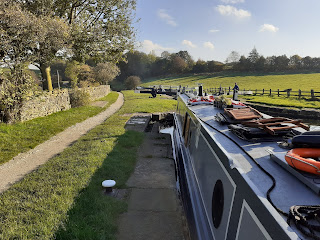 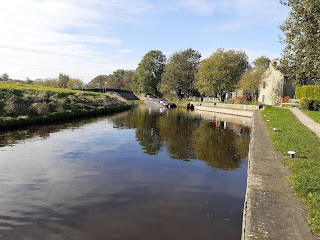 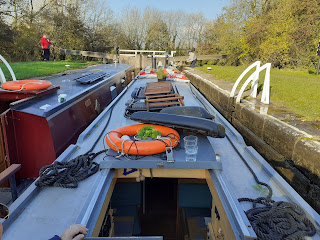 Once over the top you tend to meet up with hire boaters and we shared Bank Newton locks with a smashing and capable couple on a Silsden boat - (generally Silsden boaters are a bit ... well, not so capable if you follow but this pair were ace).  WE made very good progress with them and decided to get down to Gargrave pound whilst the weather was nice.

Having spent a quiet night in Gargrave, next morning we were up and off early as I'd alerted Pennine cruises we'd be at their boat yard by 2pm in the hope they would be able to sort out the skeg - truth be known, I'd gotten used to it by now but realised it would not be "healthy" for the rudder cup so it DID still need doing. 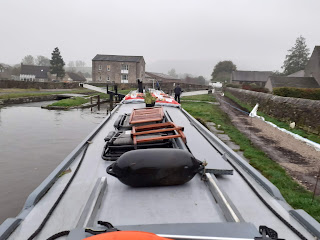 we stopped off briefly in Skipton for lunch and then chugged down (and past in order to turn around near the Rendezvous Hotel) - ahem, the water there is shallower than it looks and I got stuck for about half an hour as a result of trying NOT to snag the TV ariel in the trees - school boy repeated error ...  not the end of the world just a lot of poling and swearing.

Once back at the boat yard, we pulled in and waited for them to remove a boat from the lift to let us on.  I must say the whole operation could not have been more swiftly (and efficiently) done ... perhaps more importantly, all with a smile and genuine willingness to "help". 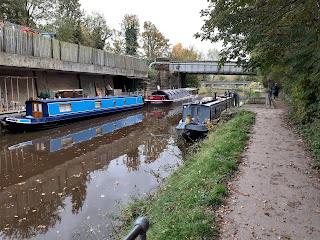 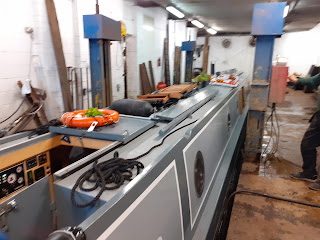 The boat lift was quite interesting to watch and Ian (the boss man/owner) took charge - in no time, Ellis was floating in mid air and the bent skeg in view - not a big bend... about an inch but an inch that made a difference 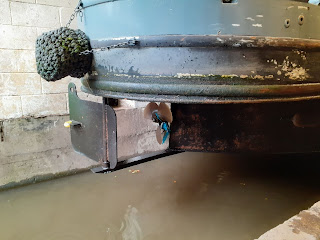 The solution was to use a bit of scaffold pol wedged under the rudder cup/skeg and then gently lower the boat down on the lift to bend it straight again...  a skillful but quick resolution. 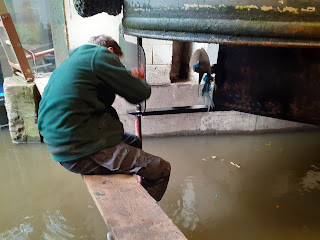 They even cut the crud off the prop that I'd been ignoring for a couple of days while it was there...

When the boat was safely back in the water I went to discuss payment with Ian - assuming I'd go into the shop and pay whatever he wanted... you could have knocked me down with a feather when he just held out his hand to shake mine and said "no charge... you've had a rough year .. chin up" - Me being quite an emotional sort began to fill up with tears...  genuinely shocked by the kindness shown - in fact, I'm filling up again now as I write this.  He ALSO presented me with a home-made new tiller pin to replace the missing "Tilly"...  Truly grateful and humbled, we reversed out and were back in town within an hour.

Calling in at the shop to top up with diesel and buy some more coal, I enquired whether he had a favorite tipple... one of the lads said that he likes a bottle of Caol Isla (spelling might be wrong) but that I'd not be able to get it in Skipton...  well he was wrong cause within an hour I'd found the Whiskey/Gin posh shop and returned with a bottle to express my gratitude for sorting me out... not so much the work but the KINDNESS shown if you follow...  Kindness going a long way with me... more so since my mum died I suppose.

ANYWAY - That's now done and  now we had 2 nights free in Skipton.

NEXT on the list (which had to wait until Friday) was getting a train back to 'Auto Spot' in Keighley to collect the (now repaired) Aux alternator...  that went without hassle (although they don't take card so I needed to find a cash point once there) - 190 quid later I was back on the train and getting ready to refit it ... in the rain of course! 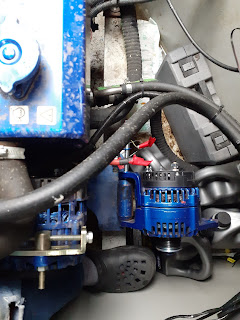 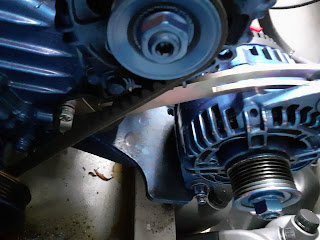 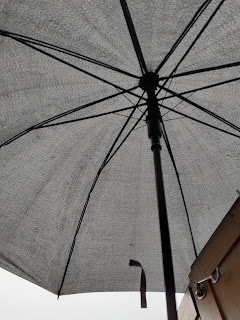 The limitations of the Brolly DID mean I ended up with a very wet left leg but it's all done now and "proper" mains power has been restored... Tumble drying can re-commence (and has done) and I've secured (but left connected) the 'Heath Robinson' joint charging cable... for next time just in case it happens again... either way!

Boyd (however you spell it) by my recent Karma repayments, I even got in the mood to play Rummikub again... AND I won!!!   TWICE! 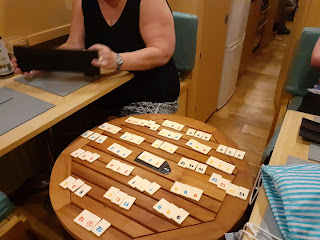 I'll leave it here for now as the sun has just sneaked out so I'm going to head out for some fresh air - this is only a couple of days behind current events so I'll come back to this tomorrow morning before I begin looking at my winter chores list. 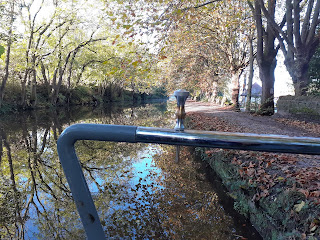 I'll eat Ginger toad in the Hole. You can cook it for me next time you're in Perth WA :-)

What an ace company, any one else would have charged £80 for the out and an hours labour, Was the tip of the skeg bent down then?

Did you know Duke and Duchess are up for sale?

Good to see you are back in circulation. Had us worried something happened to drop you off the planet! Sounds like things are picking up for you especially as I see you have a few bookings for next year. Keep it up and have a good break! Peter

I've still lost the ability to reply individually to comments on here... grrr

Thanks Peter - bookings have been building steadily for next year already so I'm rather pleased... in fact, there are more for next year than there was for this year at this time (if you follow) which is very good.

I met up with the Chap who boat Duke and Duchess last year - he seemed a nice fellow but that is a much harder "job" than here on Ellis... I really do offer a live-aboard experience - in fact, the guests on board in Skipton, came into the boat yard with me and found the experience really interesting.

Re alternator, check the vlog Jono did for Victron about charging Lithium batteries. It causes alternators to overheat because of the continuous high load - just like a washing machine or worse, a drier. 1kW means 100A. Maybe you need a cooler setting on the drier or extra cooling for the alternator. The diodes in the alternator can drop 1.5V so at 100A that means 150W of waste heat. You don’t want the nice new one to fail!
Best wishes,
Ralph