I've got rubbish at updating again haven't I ? - I've just been busy... being busy.

Having had use of a car for a fortnight, I've been out and about doing chores that are easier with transport - namely buying coal diesel and "heavy" shopping items (laundry liquid, soft drinks and the like)...  I've forgotten HOW to park a car it seems. I can fit a 57 foot long boat into a space 57 foot and 1 inch long but parking a Peugeot 107 in a space with 2 foot spare front and back seems quite a struggle these days.  I DON'T miss driving at all... I DO miss the convenience but not the chore itself.

Anyway - ONE good thing about being mobile (road wise) again was being able to have a trip over to Salford Quays.  I'm planning the 2021 routes now for www.narrowboatellis.com and I was thinking about taking a trip to Salford Quays... with that in mind, I went on a scoping exercise 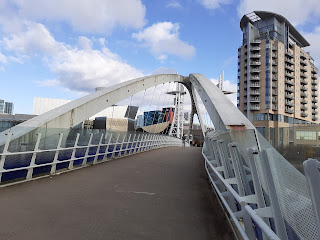 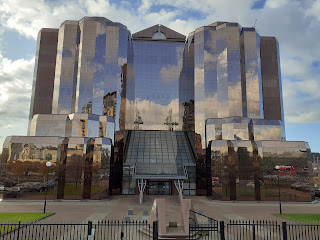 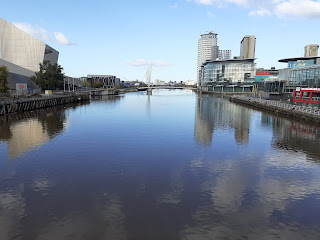 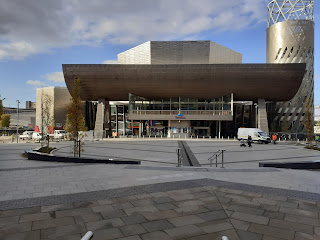 I can't work out where there is to moor though - It's probably best if I speak with other boaters who've been there.

Still, it was a pleasant day out - nice views and even a (free) visit to the Imperial War Museum.. which I have to admit was a bit disturbing... although it did fill a few gaps in my education I suppose.

On return, it was time to do the 3200 hour service  - which included both diesel filters this time... I still  HATE changing the gear box oil but it has to be done - WHY they don't fit a lift pump like on the engine sump is beyond me!

Anyway - it's done now and that will take me through until Mid March when I set off on next seasons cruising... I'm pleased to have clean oil and filters throughout for the winter... I may have a few short trips here and there but nothing more than a couple of days.

I must say, being on Shoreline is SO nice... to use the immersion heater to top up the hot water tank AND being able to set the websato to come on early morning so I don't have to worry whether the fire has stayed in over night or not...  it's a bit of a luxury but after the year I've had, I feel I deserve a bit of R & R.

First on my imaginary list of jobs was replacing the seats in the bow - They've done ok but were long over due replacement if I'm honest...

Despite their rotten appearance, they were a bit of a bugger to take apart... 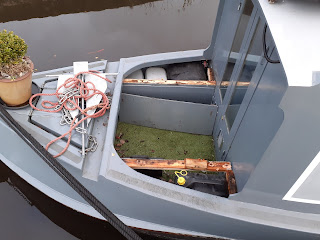 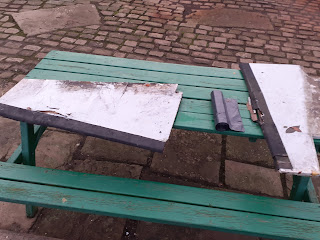 I used the old ones as templates and cut new ones out of the phonelic board back at the  workshop summerhouse. 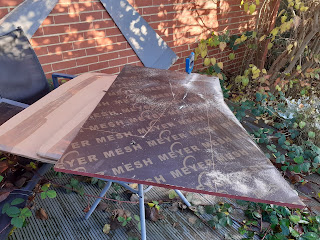 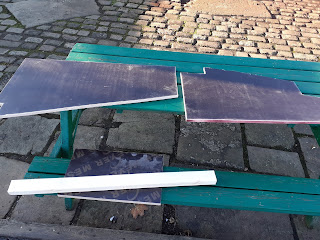 THIS time however, rather than putting all my faith in a bit of gloss paint for the edges, I've bought some epoxy resin to seal the edges...  3 coats of this on all the edges, should ensure they don't warp. 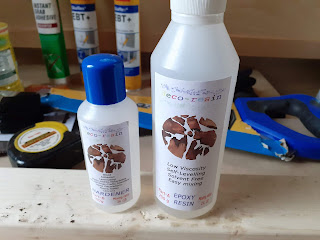 I've also cut some mdf to fit the vertical sections and done the same thing with the resin to seal the edges... Gloss paint will then go on top as a belt and braces job.

The down side being at the moment it's quite cold out so things have to be brought inside to Cure/dry.

WHICH is a bit of a pain.

Still, it's only temporary. 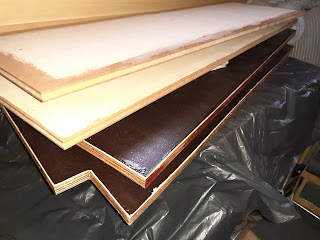 In non boaty news, I've also made a start on tidying up the garden back at the bungalow - I've got the best tenant in the world but she's not very enthusiastic about gardening... suffice to say, the garden has gotten a bit wild over the last couple of years... AS I'm time rich (but VERY cash poor ) for the winter, I've offered to spend a few weeks sorting it out...  I started with the drive this week which (along with the front borders ) has filled 3 garden refuse sacks... it's a bit of a pain the garden bins don't get emptied over the winter but Terry next door has offered to take me to the tip a few times as and when required...  I'm very lucky to have good neighbors. 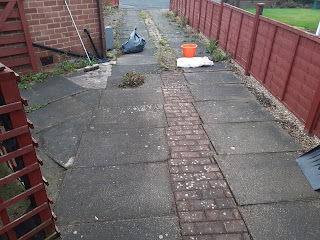 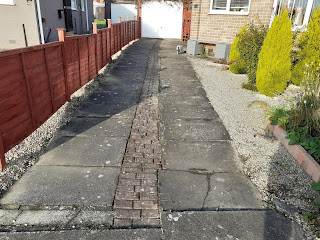 I'm going to have to work my way up to the "back garden"... which is practically jungle now lol.. THAT however, will have to wait until my back calms down a bit... a week of stooping has done it no good whatsoever - it's not even "re-setting" over night at the moment...  hmmf.

I HAD been walking back and forth the 4.3 miles (each way) from the boat to the house... however, today I've sorted out a puncture on my bike (given to me by a friend the other year) so now at least it's a quicker (if slightly more dangerous journey) to and fro. 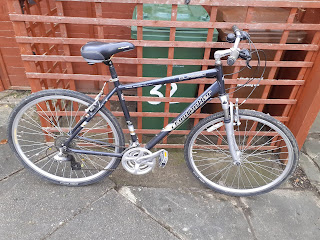 RATHER than going the short route through town, I may begin using the canal and riverside route if I'm pedaling at peak hours...  although it's a lot muddier route and has potential for MORE punctures... perhaps I just need to be a bit braver and maybe sneak on pavements like the rest of the pesky cyclists  seem to some bikers do.

The mooring at Salford Quays is by the Holiday Inn Express. It costs to go down Pomona Lock, and the problem you might have is that you’re supposed to be able to phone up and book with 48 hours notice, in practice they’ll only come and operate the locks on the days that suit them. It’s a good trip though, and well worth doing. Plenty for your guests to do while they’re there — Lowry gallery and Imperial War Museum for a start. If you want to know more, you know how to get in touch.