Having done the last service of this year, I thought I had better order some more filters ready for next year - it's not always easy to get hold of them when they are needed floating around the network as not all boatyards/chandlers stock them.

Earlier in the year, I had the good fortune whilst at Aston Marina (Stone) to pick up a fuel filter for circa £12.  This being half the price of the one the boat came with.  THIS filter had been in use for 400 hours and on taking it off, everything seemed fine - the PREfilter, also being clean... I suspect I'm changing them too often but I'd rather do that than wait until the engine has a problem with diesel bug or whatever... knowing my luck, that would only present itself heading down stream on a river with a weir looming.

Anyway the point of this waffle is having 'googled' the filter, I managed to find this website that sells them https://www.inlinefilters.co.uk/ and they work out at less than half the price of the "proper ones".

Suffice to say, I bought 4 so are set up for next year now. 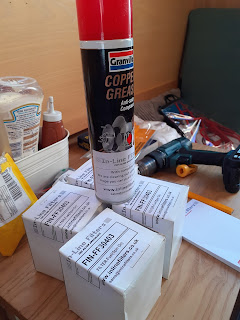 They also sent me a free can of copper grease with a note on saying they're having a clear out of stock and thought it might be useful .  I like that kind of thing.

The weather has been pretty much wet and horrible of late so doing painty chores has been rather difficult - During the odd dry spell, I've nipped out side, slapped on a bit of paint and then brought it in to dry ... which is difficult in small space.  It does take rather a long time to get 3 coats of gloss on 2 side of something... and extra coats on the edges (previously epoxy resinned) 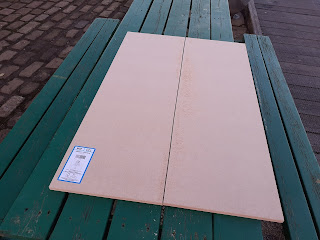 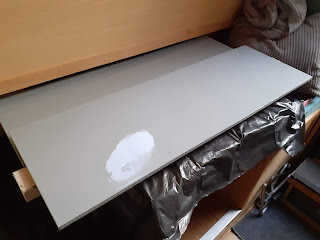 The weather has prevented me from fitting the new bow seats which is frustrating as they are also in the way.

Some good news is my friend has taken away all the cushions from the dinette (crew quarters) and is going to begin recovering them with the fabric I bought a few weeks ago - this means there's a bit more room in there now AND has made it easier for me to begin some painting... I've decided to experiment with white and grey  - the wood having begun to yellow a bit which isn't to my taste. White above the gunwales and grey on the side of the seating...  if it looks awful - well, it'll be too late lol.

BACK in the engine bay for a minute, following on from the recent service, I noticed a little drip from the bleed screw - those of you who have here since 2016 may remember I face planted into the engine hole and snapped it off when the boat was new had an accident and broke it off ... since then, using a little m5 aluminium bolt with a leather washer to replace it.  It's annoyed me every time I've had to bleed it when fitting a new filter as getting it tight enough not to let fuel through but without snapping it off, has seemed like a magical art.... Ergo, I've decided to replace it.  I spoke to the mariniser (Engines Plus) and in order to get the bit I need - THIS https://2.bp.blogspot.com/-IRr7cMRUcZw/WCtlUuPH3II/AAAAAAAACjQ/pyaYTDwXnJ8SE2mRrhpFYkRDaqLFw4y7gCLcB/s1600/DSC_0162.JPG
I have to buy the whole filter assembly... which has worked out at just under £50 !!! - although it does come complete with a filter.  It's a waste of money I know  lot of money for a bleeding, bleed screw, BUT at least it will make servicing a little bit easier AND I'll have a new filter housing in stock as a spare part for the future... Hmmf!!!

BACK at the bungalow, the ground has been way too wet to make a start on the rear garden but I did have a bit of luck with an old shelving unit the tenant had in the garage ready  to go to the tip... 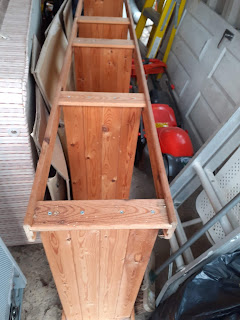 I've taken it apart and it's going to be used to make the new rear seats - having thrown the old padded ones out a few months ago ... them being sodden due to holes in the leatherette.

Luckily, I do not have any photos of me strapping bits of wood to my back to cycle through town with to get them back to the boat... suffice to say, it was a bit Laurel and Hardy!!!

Was it one of these https://www.asap-supplies.com/drain-bung-for-cav-fuel-filters-302998