Emotional times, a Bleed Screw and lumps of wood laying around...

My "post titles" get more obscure...  I blame Brexit!

I've never liked this time of year...  the approach to Christmas - MORE so this year as I'm feeling very emotional at the moment.  Actually, SCRATCH that,  as a child I LOVED this time of year but as an Adult... well, it used to be frustrating ... folk madly dashing around spending money they don't have spare on things they (or their family/friends) DONT really need...

THIS year, just being in the town or shops wandering around hearing the Christmas music playing and seeing people scurrying around it's making me quite tearful.  It's the first Christmas 'mum-less'...  now don't get me wrong...  since being a grown up my folks have never enforced the common recreation attempt of a 'perfect family Xmas' - in fact, quite the opposite... Mum and Dad have always been quite self sufficient... just being there for each other.

Of course, that all changed when mum died.  I have to keep writing that btw to remind myself she is gone.  It's so very hard changing her from the present  to past tense too.  I'm having a similar trouble in regards my soon to be ended civil partnership.... changing from "we" to "I" is very difficult.

Even though, we'd never gone in for big presents, at this time of year - like most people, I always used to be wandering around with one eye looking out for some token gift that mum would like.   It hurts not doing it which has caught me off guard.

Dad is insisting "it's just another day" and after his lonely adjustment to life without mum, is adamant he's going to ignore Christmas totally... declining various family invites.

It'll be horrible for him.    I know this... you see, as an adult, I've spent 3 Christmas's "alone" - all of which have been thoroughly miserable... it's just what happens...  bearing in mind he comes from a large catholic family and went straight into married life with Mum for 52 years - it's going to be his first one alone.

I 'GET' that he feels he has to do it...  and in a similar vain, after 14 years with Andy, I'm doing the same thing on the boat alone - I suspect Dad (like me) is figuring he's going to be bereft and would rather not have an audience for it... a bit like my brain is bracing me for too I suppose.... my logical brain KNOWS its just another day... but my emotional brain is going to be screaming at me that I'm mum less and mid divorce - hells, bells it's already been laying the foundations ...

Anyway - I just thought I'd write that down in the hope it clears the fog a bit and lets me think about other things...

SUCH as, boaty chores.

THAT said, I  came down with a cold (commonly known as 'man-flu') which has knocked me sideways... I suspect because I've been running on adrenaline for months, now I'm able to be under the weather, my body has ceased the opportunity.  Oh well... a few dozen lemsips and bottle of sleepy night nurse should get me over the worst of it.

I've  assembled the first rear seat and back rest -using the old shelving donated by the tenant... it may look ugly now but once it's covered with purple leatherette... well it may still look ugly but will at least make it a little more comfortable to sit out the back of the boat lol. 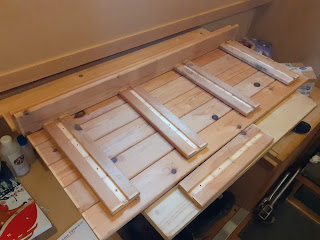 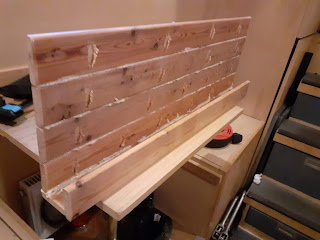 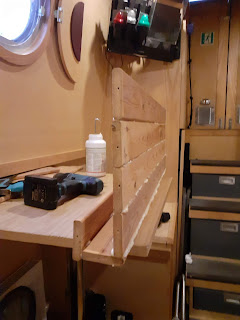 I've finished the bow seats now and fixed them in to place....   all I'm waiting for are the turn-buttons to arrive from Ebay and I can 'tick' that job off.

The weather isn't being particularly 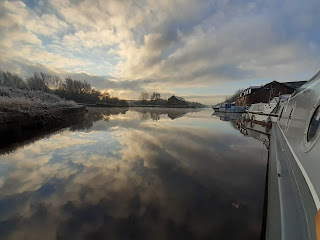 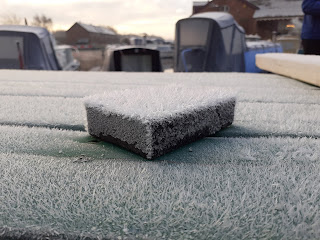 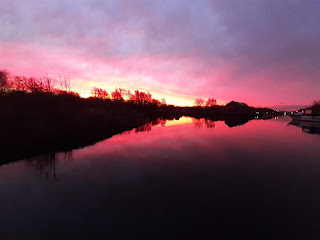 helpful in the painting department though...  one minute it's minus 3 - the next its raining ... neither being ideal.

Still, it has given a few nice photo opportunities... the sunrises from my temporary winter mooring being quite beautiful .

oh - btw... the fuel filter housing arrived this week... I've removed and installed the bleed screw (onto the existing assembly and that's cured the little diesel drip...the water drain bung on the new one has now been replaced by a plastic thingy which is a little easier to handle than the current Torx one in situ. 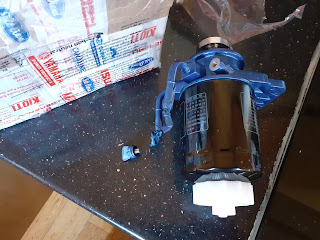 Just remember that it is less than month to 2020 and when you can make all those resolutions for the New Year that can be broken a week later!

Well at least one of the tick list is now done - gives hope for the rest but it is always infuriating when you are in sight of finishing something and one small but vital element id still to be sourced - arrgh!

I cannot pretend to have been through what you have of late but enough to realise that at times sadness comes up to take you by surprise just when you thought you had it cracked - make the most of the season. Hope our paths cross sometime in 2020.

Hey Mark. Sorry you're having a rough time. I was searching for next years schedule and found this. Take care and stay warm. I'm sure you'll have the boat looking tip-top. I can't wait to see it, hopefully next year. XO Chris (Twitter@approveusername)

hmm I think you are incredible for writing about how you are feeling, I'm not that great at that bit. This Christmas is my first Christmas without my mum so have an idea of some of the feelings you have. I'm looking forward to next year (see I bi-passed Christmas completely!) as things are set to change on the work front. looking forward to seeing how your trips and guests enjoy you trips next season. Take care. Caroline

Thank you good people... things DO feel odd but like Caroline, I'm mentally skipping forward to next year - I'm really looking forward to begging the trip from Leeds to Liverpool (and the week in there) and then heading off across the HNC twice) before spending a while around Llangollen. This time next year, we'll be in Stone and spending the winter hunkered down in Aston Marina in preparation for 2021 when I intend to spend more time in the narrow canals and embrace Wales and all her beauty. I've got crew lined up (more to follow in on that in the new year) so it's still going to be the adventure I always wanted... just slightly different than I envisaged.

We had a couple of short stays at Aston this year - to be recommended! However, Stone is quite a walk but it will give you the exercise that you so clearly crave!