Seats complete and "That London Look"...

Since my last missive, I've been busy working through my imaginary list (I'm not good at actually WRITING lists any more) of maintenance/improvement jobs... and the odd 'spill' a side, things are progressing nicely.

Luckily, nothing I'm doing actually involves spending more than a couple of quid - which is a good job as what with the solicitors bills, winter mooring costs and no money due in yet from next years bookings, I'm skint as a skint person.   I'm rich in other ways...  time... compassion... empathy... general 'fabulous ginger person-ness' and NOT forgetting modesty lol.😇

I'm still feeling rather miserable about this 'Christmas thing' - and still emotional at times but I'm taking that as a positive thing... the solution to lonliness being quite simple.   Every day, in between jobs when the sun is at it's brightest, I'm forcing myself to walk into town (it's about an 8 mile round trip from here) to buy a loaf of bread or some eggs... or even just look in the "yellow label section" in Sainsburys * other supermarkets are available and usually cheaper*...

This walk, takes me past a line of boats - and the beauty of this is that there are usually a few boaty people pottering around... ergo, an opportunity to pass the time of day with a chat.  I never realised how much I needed to be around people.  During boating season (which some would argue is all year round)... when I've got guests on board (and even in between guests) you get to meet and natter with all sorts of folk.    In the middle of winter, when tied up at a marina, it's easy NOT to see anyone... and I've concluded THAT is not good for me... I'm (rather bizarrely) a people person and need to interact.  So that's that then... STOP feeling sorry for myself about being on my own and become the weirdo who chats with everyone/anyone .... (not a big stretch for me some would say)...

Loneliness a side,  this is STILL a wonderful life... you just have to attack it  from a different perspective some times to remind yourself of how lucky I am...  incidentally, I love that old film... "Every time a bell rings an Angel gets it's wings"...

ANYWAY - I've finished all the new rear seats and back rests... I'm not sure now that I've done them in Burgandy whether I like it or not... once we get a few warmer days and I can slap some new paint around the back of the boat, I'm sure however they'll look better. Whatever the initial feelings are on them, I'm sure as I've gone passed them a few times, they'll stop offending me. 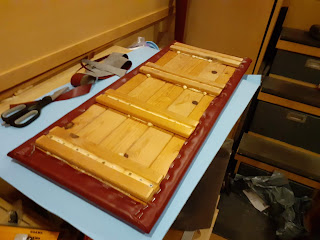 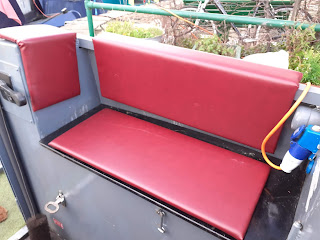 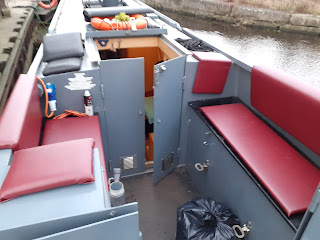 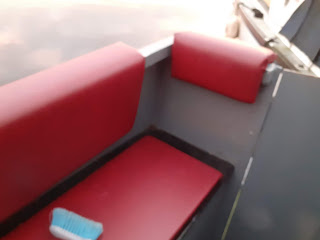 The seats are NOT as padded as the orginal ones were... and whilst not as comfortable, they ARE more stable  - leaping on and off the roof at times could be a bit of a gamble lol.

The crew-quarters dinette has looked like the middle isle in Aldi for a while now... 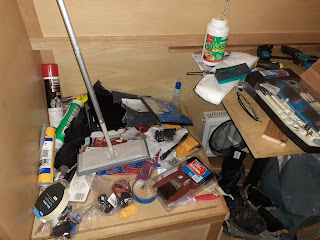 You might recall I had planned on replacing the porthole shutters I made a few years ago with new ones...  tbh, whilst they are only mdf with a birch veneer,  by the time I'd bought new disks, veneer and edging stips that would have been 100 quid plus I don't have spare atm.  HENCE the plan to give the existing ones a bit of a sand down and then paint them with left over exterior gloss paint... During the undercoat stage I wasn't sure (it was dark undercoat I'll grant you) but once I got into top coat, have decided they'll do until funds allow. 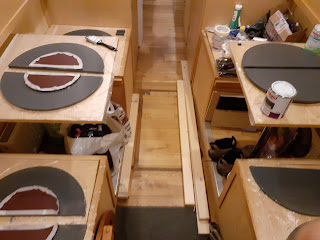 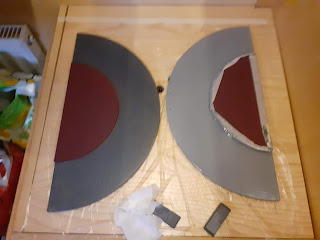 Of course TAKING them off the walls, it had become more apparent just how much yellowing had taken place over the last 3 years. TIME to experiment with a tin of Satin Wood... 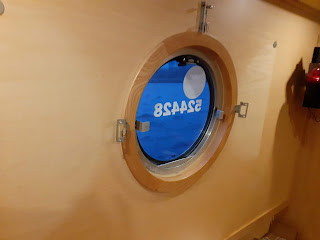 I was a little hesitant but once I got 5 coats on, have convinced myself that "The London Look" is actually quite alright.  I'm going to resist the urge to paint bulk heads and just keep my painting to port and starboard. 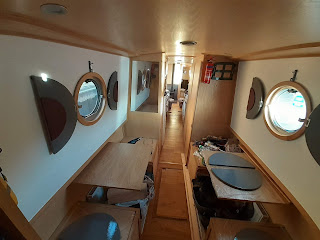 I've not made the best paint job on the shutters (the odd run here and there on the edges) but they look clean and fresh AND will be easy to keep clean from now on.

As I type this, I've also got the saloon (that's lounge to you non-boaty folks) ones off and mid-paint...  I'm undecided yet as to whether to paint the walls in there too.  Sometimes, it's best to sit and think a while - failing that, I'll ask visitors opinions lol.

Meanwhile, OUTSIDE the new bow seats are now fixed into position (I might have told you this - I forget) and all they now need are the 'turn buttons' to stop the sides falling off ... They've arrived from Ebay and just need picking up from home. 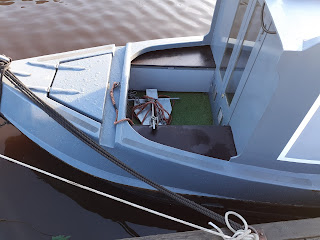 I had planned to paint them with non-slip paint but given the whole point of phonelic board is that its supposed  to already be non-slip, have decided just to apply a strip of hazard tape on each edge to act as a 'brake' in case you do slip on the board itself... it'll make it less likely to flake I think.

Back inside again for a minute,  I've dug out the old silicone around the portholes (it was looking a bit sorry for itself) and rather than redo with the same, have opted for grey sika flex (construction adhesive)... it's much better having thunk about it, decided grey was the same colour as dust so they should look cleaner for longer lol. 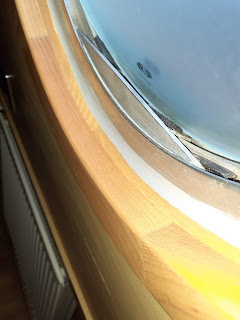 Having lived with this for a couple of days now, I've also removed the (now mucky and failed) silicone from the floor edges and replaced it with grey too... it looks fine (although I don't appear to have taken a photo of that so you'll have to take my word on it.

NEXT job on the list is going to be removing the shower sealant and replacing THAT - THIS time rather than using white silicone, I'm going to opt for sika flex (again) but in black... ergo, it won't show up as mucky and therefore "look" cleaner for longer...  Kim and Agi have nothing on me!

Its a shame you can't relocate your shore power inlet, it would make the back much more comfortable and possibly less likely to damage it.

Shower tray, you used to be able to get a sealing strip that sticks down should last a lot longer


Just looked at you website, shame we're limited to school holidays still, but maybe once the wife retires.....

You probably ought to update the website as it still has a lot of we, us, etc on it.

Thanks for the info and Feedback...

RE. the website - I've recruited crew for next year so whilst it originally related to Andy and I, the Us/We are/will still be valid... I do intend removing some named references etc. but that chore is behind my 2021 route planning and getting them on line.