Back 'off grid', boat lifts and more maintenence...

I've not stopped -either... in fact, in true 'ginger form' I appear to have been galloping towards a deadline that seemed eons away back in November... Thing is, I've always considered myself to be a self starter and generally very dogmatic about stuff.  I can't believe I'm nearly at the end of my "rest period" with still things to do.  NOR have I had a rest!    HOW on earth I used to work anywhere between 70-90 hours a week AND fit a boat out is beyond me now.

Having spent last weekend - until Tuesday as it happens, "Off Grid" I soon got back into the charging regime of a "non-moving boater" ... ie, running the engine for an hour first thing to let the 175amp alternator do the bulk charge, THEN topping up on the genny for another hour or so to get to somewhere around 95% SOC and then leaving the solar the rest of the afternoon to finish off... the result being batteries back to 100% by around 2, sometimes 3pm. 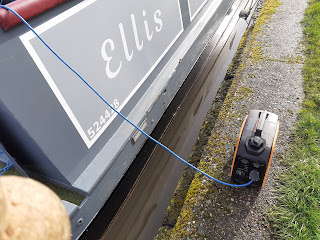 I must say, I'm still VERY pleased with that little  genny I bought from screwfix last year when the auxiliary alternator packed in - it's very quiet runs on fumes and so long as I limit the charger to 35amp, works like a dream. IF I make the mistake of putting the washer on (without selecting cold) it cuts out but other than that, it does what it says on the tin for an awful lot less money than a Honda!

JOB wise, whilst the sun has been out (all be it briefly) I've been out in the daylight doing more blacking (starboard side now), attaching bits of rope to fenders- ahem I might have been using cable ties for a few months lol.    Of course I'd forgotten how to splice eyes so that meant a quick you-tube tutorial 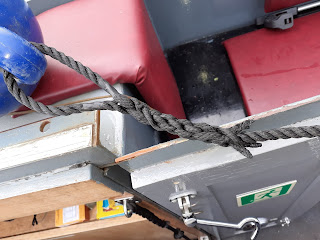 It's not perfect but it'll do to secure a fender.

WHILST buggering about in splicing mode the art was still fresh in my mind, I also dug out the new mooring lines to splice eye's on to them too... (the current mooring lines are the old centre lines cut down). The new lines are 15 metres long and although not the colour I wanted (stripes were preferable but costing 15 quid more I couldn't justify them), they've turned out OK too. 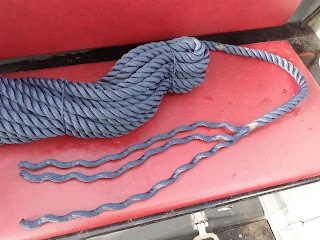 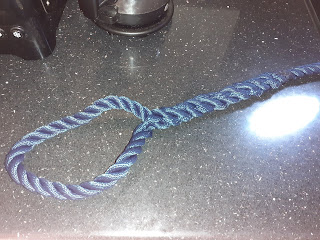 Replacing the mooring lines, ALSO freed up a 15 metre length of black rope which I've used to replace the now fading Anchor rope - WHICH to be frank had never really been long enough ... the rule of thumb is (I believe but I could be wrong) to have a rope 5 times longer than the change attached to the anchor... and as my chain is 9 ft long - that would mean a 45 foot rope...  Anyway - It's done now so whilst perhaps not the prettiest job, WOULD be safer if ever it needs to be used in Anger. 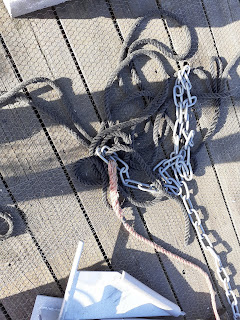 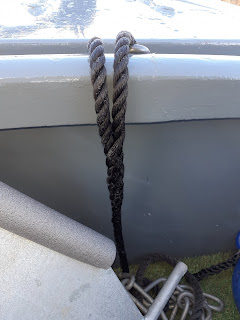 And of course the hoarder in me  emergency planner in me, has kept the old mooring line as a back up in case it's called upon - actually, come to think of it, it can be the 'Spanish Windlass' the next time 'Ellis' encounters an immovable lock gate.

Now it's warming up a bit (he says shivering cause the fire is out so he can re-paint the stove this morning) I've got some more paint mixed the same colour as originally used so as to begin touching up again. 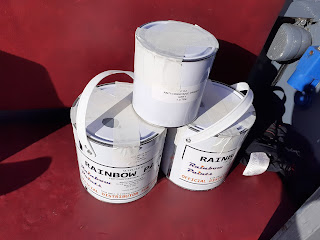 The 4 mile walk TO the paint shop was lovely - less so, the return lugging that lot!  - Still , it's on board now so I can leap into action when the weather is dry long enough...  TRUE to form of course, SINCE I got the paint, it's been bucketing down again... which has forced me to enabled me to spend some time doing accounts and working on the new website... TWO jobs which bore me stupid (and some would say I'm pretty stupid to begin with). 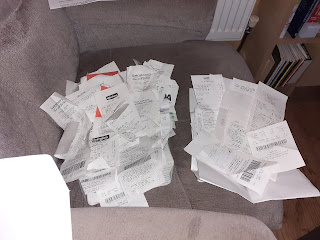 Accounts are depressing at the best of times - more so when you've no income for a period but continue to have to spend money maintaining the boat..  It's going to be a while before I have any money "spare"  (for the next 5 years I'll be paying off the divorce loans from a business model that was only intended to sustain us through winter month without earnings, NOT pay loans AND live) but it's ok - I'm still in love with boating and can't wait to chug off with this years guests.    It'll be SO nice to have company again as like I've mentioned before, I really don't function well on my own.  I mean I CAN do it... but it's miserable on your own. STILL, Luckily I'm ginger (and by association) FABULOUS!

Anyway - having gone back to the Marina, On Thursday I awoke to lots of beeping and engine noises to find a crane being erected ready for a day of lifting boats in/out of the water.  It was SO much more interesting being able to watch when it's NOT your boat swinging around in the wind.

I've put a couple of videos up on Twitter - if the links work that is:

There were quite a lot in total but as I had jobs to be getting on with, I couldn't hang around videoing all day.

I really ought to try and build a you-tube channel like SO many other boaters... thing is, it's all "been done" - I don't think I've anything unique I could add to the so many other wonderful you-tubers out there... NOR do I have the time to produce well edited material.... THAT Said, when it's been an interesting day, I sometimes wish I'd had a camera running to record the events - I'll sleep on that a while and see how it could be done, WITHOUT it becoming all consuming... The adventure is DOING IT not recording it being done if you follow... at least for me anyway.   THEN again, it might actually be a nice thing for guests who come along to be able to (at some point in the future) click and watch videos of themselves working locks etc... I dunno.

SO then -TODAY ... 29th Feb (I gained a day as I hadn't spotted it was a leap year) I leave my winter mooring and head back on to the cut.  I'm gonna hang around in Stanley for a week or so to try and get the garden as tidy as I can before setting off on my slow journey to Skipton to being the cruise season proper... well I SAY that - as it stands, both rivers Calder and Aire are causing mayhem at the moment so WHEN I'll be released on to them, is anyone's guess.