I think it should begin something like this "bless me father for I have sinned"...  Pride before a fall and all that coming into play.  REMEMBER how I was enthusiastic about the new website building platform I was coerced into by GoDaddy?

Why? - well, a side from it taking AGES to build pages in a restricted format that I didn't want but accepted I'd have to get used to - they ALSO impose a page limit... but they don't warn you it's a "limit" until you reach it...  they give you little hints along the way, such as "we notice you are creating a lot of pages (circa 20 at the first warning) - did you know you can create multiple sections within pages to increase site speed etc?"...  THAT sort of thing...

Of course, WHO in their right mind would worry about that warning when making a page for each cruise?  hmm?  - exactly.... SO I kept merrily (read grumpily) building away in my new (tolerated) format... until when still with nearly HALF the current years trips to write up I hit a wall - "You have reached the maximum number pages" - 50 ffs.  THIS being on a Saturday...  of last weekend which I'd allocated to devote entirely to doing it, thanks to 'Storm Dennis' coming in.  COULD I get hold of my account manger ?  could I buggery...  would "24/7 support" lift the limit? - WOULD they buggery.  ERGO, I had a strop and decided to START again from scratch on another hosting service.

Google (as usual) was my only available friend and she suggested various services... having fiddled around with a few, the LEAST prescriptive (although perhaps a bit slow) was WIX.   SO, I purchased a new domain (narrowboatellis.net ) ... I'd always been intending to buy it so at least that part of things didn't feel like a waste of money.  ANYWAY - Long story short, I'm now building away the replacement site on that domain in the background (not publishing it until it's ready) and WHEN it IS done, I'll transfer the narrowboatellis.com away from godaddy and point the new site to that in stead... the theory being stay live with the old site until April ish and then it'll all run smoothly .

IT's still annoying though ... all this kerfuffle just to get a few columns to show up properly on a mobible phone... thing is, enough people have moaned at me now how crap (their words) the current site it... them obvioulsy not quite getting the fact that I'm a boater 1st... businessman 2nd. STILL, it is 2020 and I suppose even old gits like me use their phones a lot... ggrrr.

ANYWAY - I've got my 300 quid back from GoDaddy (thanks to the decent business manager bloke seeing my point of view and understanding his product's limitations) so fair play to them on that one...

REWIND a bit - "Storm Dennis" - having endured a weekend of hell from Storm Caira (I have a feeling I'm spelling that wrongly), I decided to move 'Ellis' before this one hit so as to be around other boats AND away from that blooming aqueduct.  A side from the fact I'm exposed to massive waves/winds down there, the noise from the blooming yogurt pot in front "flapping" keeps me awake big style... especially when coupled with the groaning and slamming into the pointy bits of the quayside.

Having moved into a gap in the long term moorings I felt much happier, safer AND more sociable.  It was lovely being around people again and having chats with folk I've not seen properly for ages. 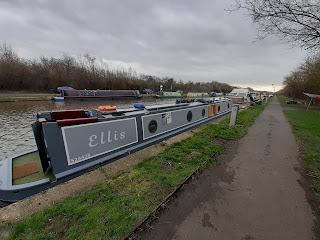 The media hysteria re.the oncoming storm had me apprehensive again.... SO, ever prepared, I thought I'd sit it out in my new waders... a gift from a now retired (retired from boating that is) friend - he'd dropped them off the other week after seeing the effect of the previous storm. 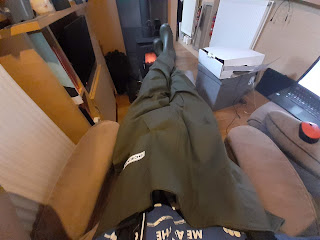 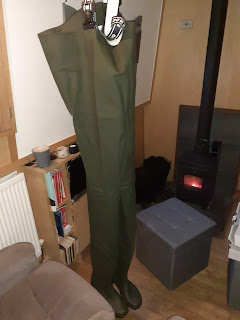 TRUE to form of course, BEING prepared meant that I didn't need to be...  "Dennis" was a bit of a damp squib... for us at least at Stanley.  I know other parts of the country didn't get off so lightly.

I spent Saturday night continuing working on the new site (btw - it's not flashy it's Just the same as the old one but laid out slightly more phone /tablet friendly) when I got a message from Sally to see if I'd be around on Sunday afternoon her husband and her were dropping Tree off after a weekend with them up in Harrogate...

THIS Meant a quick tidy around and then lunchtime trip to the pub for a catch up.  It was so lovely to see them all again - I so miss our 'Wine Wednesdays"..  it was just like old times (minus Andy which was a bit sad) but a smashing and welcome surprise none the less.  I even managed to ask a bloke sitting near to take  a "team Ellis" photo for me! 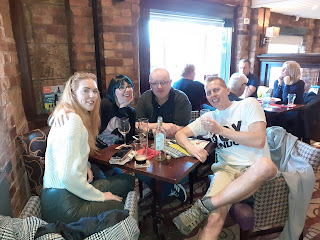 I posted it on a boaty forum in dispatches and Tree seems to have attracted a lot of attention from the old codgers more mature boaters lol.  She likes that sort of thing.

We spent a few hours in the pub catching up with each others news - mine being less to report than theirs, other than reaching decree nisi at court on the 3rd Feb - absolute to follow 6 weeks and 1 day from there I suppose.  That was  the sad part of the conversation but it's life and sometimes you have to accept even the things you don't want.  Writing of which, I think I've offended the solicitor dealing with it the other day.. she keeps sending what are (in my opinion) pointless letters to tell me things she could have told me when we went in to sign the financial  order  a few weeks ago... AND a few of the letters have contained spelling mistakes, wrong words (gender related re.divorce) and the latest a 'missing word' rendering the contents irrelevant.  HAVING pointed this out, I'll no doubt have been charged for "perusal" and THEN the reply acknowledging (note NOT apologizing) for the typos...  I suspect that was an expensive thing I did by bringing these matters to her attention .. I mean I make enough typing mistakes/grammatical errors myself.  THEN again, I'm not charging anyone £275 quid an hour for my writing services am I?

BACK in boat maintenance world, my perspex disks finally arrived - expensive but necessary ... (they are to replace the porthole shutters that got knocked off in the last few years).

A bit of a pain to carry 4.5 miles from home back to the boat in the wind...  but a bit of cable tying ingenuity meant I could tuck them under my arm and cling on 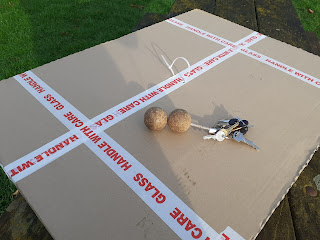 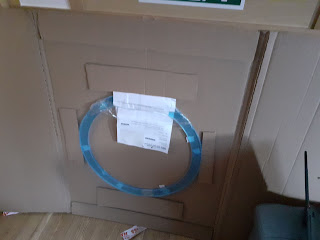 My plan was to stick magnets to them, and attach (using hot glue) the fiberglass mesh.  BEFORE sticking the magnets on (with epoxy resign) I had the foresight to create a key for the glue to grab hold of... my dremel now being burned out (and binned), I improvised with my trusty old drill. 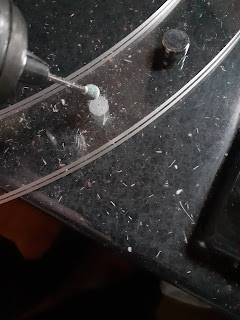 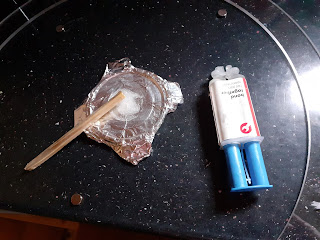 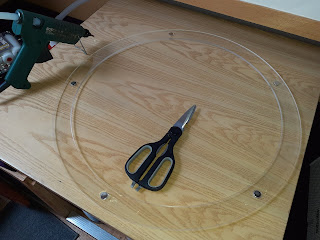 Having done both of them and attached them to the side of the boat, it THEN occurred to me, rather than spending HOURS (literally) grinding a 45 degree angle on the inside of the old ones (that didn't fit the portholes totally) so as to get all the magnets to touch the boat, I SHOULD have just attached another magnet - thus making them stand 3 mm further out but with ALL magnets touching!!!  Hmmf...  hind sight and all that. Anyway - point is they are all now done and 'Ellis' has her symmetry back again.

I've completed the 2 side hatch screens too - I was going to get a filament of wood to cover the edges where the matting folds around but when I looked, they worked out at the best part of a tenner... ergo, I can live with seeing it lol. 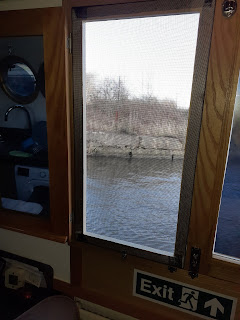 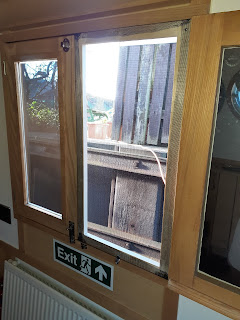 I've also made them for opposite side of the hatch  than last time if you follow, to balance out the fading effects of the sun ... this time, attaching a half turn button to hold them in place.  I've finally (after 3 years ahem) adjusted the cabin hook to starboard to keep it open properly - last year it popped out and clonked a lady on the head... LUCKILY she was very nice about it (not being hurt) and didn't make a fuss... THAT's what I like about 'proper people'  ...  I suppose it's probably an older generation thing, NOT being litigious at the slightest thing... accidents DO happen.  I Know this more than most as I can fall over my own feet when sitting still! - Anyway... that's done now.  It's sometimes hard to see what I've been doing and I have to admit to being very busy since the end of last season but even I'm not always able to see "at what" .  I should  have kept a list I know.

Another job that needed doing was to stabilize  the gas locker hinges - one had broken complete and it's only matter of time before the other does the same... I sourced a couple of stainless steel robust hinges from the 'tinterweb and bolted them on the other day as a stop gap until I can get a proper hinge welded on. 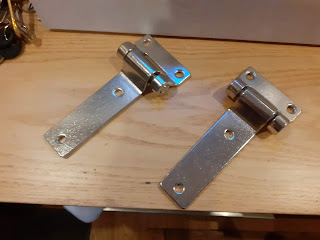 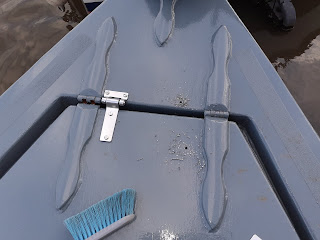 When I find the primer, I'll slap a coupe of coats of paint on to make it match... not a perfect job but sturdy enough to avoid losing the locker lid into the canal at least!

My final job this week was to fit a new rear button - the old one being long past it's best...  the new one (for now at least ) does stick out enough to protect the rudder... I suppose at some point I need to add another few inches in the  form of a tipcat or similar (actually I DO have the front button which I could use behind it) but that will have to wait until I've another pair of hands to help.. I don't want to risk dropping such an expensive item in the canal - or at least if I do, I need it to be in a shallower canal than this one (the Aire and Calder here is circa 5-6 foot at the sides and 12 foot in the middle)... 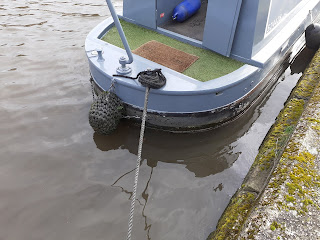 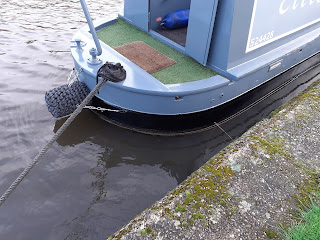 I've also touched up the blacking as far down as I dare - it's not to protect it, just tidy it up a bit for this season... I'm booked into dry doc at the end of the year for blacking... which I cant afford but can't put off - the water line already looking a bit too shabby for my liking.

Today (it's just after 7am on Saturday as I finish this) I'm going "looking" for whatever it was blew off the roof about 5am and made a big splash...  I'm hoping it was just a fender rather than the life ring... a fender being cheaper to replace when  if I can't find it.

So pleased to see you weathered the storms. Over here in America, the news made it sound as though the end times were approaching my other country! I am thoroughly in love with all the Perspex you've installed. Is surely does let the light and the view in.

Best of luck with the new blog site. I hope 2020 is a crackin' great year for you both and NB Ellis.