I'll come clean - I'm not in the best of moods at the moment... well let's face it, WHO is?  This whole situation with restrictions and people with different opinions /solutions/knee jerk reactions and down right hostility is getting me down.  Well more cross about it than down I suppose but given the impending "dark gloomy nights" and short days it's only a matter of time before I'm feeling blue.

The thing is, I love boating, and moving around the network - I love chatting with folks and having guests on board.  Winter is miserable enough after a GOOD summer of guests ...  I'd hoped for a good season (I'd been pretty much fully booked at the start of the season ) - well PRE the covid situation.  SO many folks couldn't come (the overseas totally cancelled and even when we were allowed to operate under the '1 metre plus' guise, quite a few didn't want to take the risk... which I totally understand.

Others were "trapped" in places like Wales and Scotland with their power crazed dictators cautious leaders locking them up like criminals  To summarize, from a potential "earning year" of  30 weeks, we only were able to "do" 7 and a half... the majority of which were solo travelers... in short, I'm heading into winter with even less than bugger all and STILL have divorce loans to some how repay.  NOW OK ... I'm not destitute as despite NOT being GIVEN any grants or self employed income support (you'll recall I didn't qualify as due to this being a new business, I didn't have 3 years profitable tax returns to submit)  I WAS able to borrow 25 percent of my turnover on the basis of a 'bounce back loan' - which of course will need to be repaid.  I can survive and will try and offer some out of season day trips again as soon as tier 2/3 restrictions permit 2 households being under one roof again...

THIS whole "tier" thing is a load of bollocks, designed to let the government off the hook from having to try and 'pay' people not to work whilst at the same time, effectively passing the buck to businesses/self employed folks.

THING is, I GET it.  Boris and Co - (and by Co I suppose I mean the country) can't afford to have a total lock down again... and anyway it DIDN'T work last time did it? - all these folks spouting off about a ruddy circuit breaker being required (and Wales / Northern Ireland and Scotland most probably - I've lost track a bit) don't seem to GET it....  it's all spin an being SEEN to be trying to do something .... when in reality there is bugger all they CAN do.  I believe the term is LIP SERVICE.   Boris needs to grow a pair of balls and actually state that we can't afford to hide away forever...  RATHER than allocating funds to provide (lip service ) support, to the offending areas, how about  channeling all that money into MORE field hospitals to provide covid care  - let it burn it's way through and let the people who WANT to hide - or rather CAN afford to hide on their pensions and HAVE all the supermarket delivery slots etc. DO SO.

I'm really getting sick of the young folks being demonized for just trying to get on with things - I saw a lovely clip the other day of an 83 year old woman saying she's not got much time left and she'll be dammed if she's gonna hide away so she'll take her chances - very stoic but more importantly NOT selfish... she went on to say it's all well and good her friends berating the youth for putting "her" in danger but they will be ones who (if they are lucky enough to be employed in whatever economic world is left) will be paying for this for years after she is dead anyway.

Don't get me wrong - I AM complying with the guidance... I AM wearing a ruddy mask when in shops like I'm supposed to but it really is a load of cobblers having to wear a mask to get from a pub door to a table - then take it off once I'm sitting down.  It makes NO sense... NOR does the "children being except" rubbish - everyone knows they are full of germs at the best of times... it's all gotten so silly it'd be funny if society hadn't been brainwashed.  THE REALITY of a SAFE mask is this - what is now having to be worn all day in operating theatres 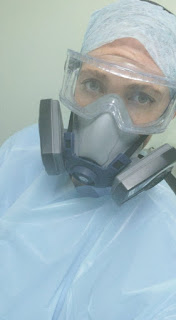 So all this silly mask wearing obsession whilst might mitigate how far the globules in a cough can travel, WON'T do an awful lot to stop it spreading...they are just a way for governments globally to create some positive assurances that our lives matter ... the reality is none us really do.
Rant over - suffice to say I continue to follow guidance, wear a face covering, wash my hands and keep the required distance away from people which is common sense (well that latter 2 anyway).
MEANWHILE - back in boaty land...
When the couple got off in Chirk, we decided we'd go BACK up to Llangollen Basin to do our "1 day turn around" back on mains electric ... that turned out to be a bad move as we ended up stuck in a convoy - at the head of which was a 70 foot boat being skippered by someone who'd never been on one before and who held everyone up.  In fact, a couple of boats ahead of us actually winded and abandoned the journey.
We tolerated it and did a couple of loads of laundry on route anyway so it turned out for the best in the end.  Next day we headed back to Trevor and collect our next guests.  They were with us for 5 nights and after them we had another quick turn around and then another guest joined us in Nantwich to Penkridge.  When he'd departed  we trudged on to Stone in the wind and rain and then spent a few days on shoreline in Aston Marina.  IT was nice to see my friends again (who are there now for the winter ) and when the time came to leave, we began our trip back up north where we're to spend the winter. The plan HAD been Aston but with winter stoppages planned, IF they over run (and lets face it that's highly likely) we'd NOT be able to begin next season in the right place at the right time.
So here we are ... effectively trapped in a tier 3 area for a month at least with no chance of doing any trips.  On the plus side, I HAVE done the 4200 hour service and also gotten rid of 20 litres of waste oil to be used as fuel for a boat yards heating system.
Here's a photo of me having a nap after that picnic we had down by the river near the Ponty what's it's name? aqueduct. 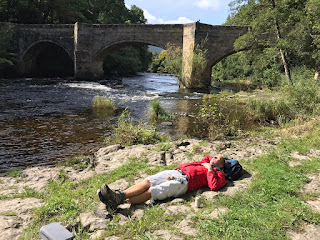 I think that was the last sleep I had lol - nothing to do with a big swig of oramorph to ease my poorly toe - WHICH is still sore btw if anyone cares.
Until next time... (when I'll hopefully be feeling more chipper)

Just to cheer you up, the burning of waste oil in a heating system was outlawed about 2 years ago, so mum's the word, wouldn't want Environmental Health visiting the unknown boatyard, keep smiling 😷🤓