Happy new year and all that malarkey  Personally, I fear 2021 is not going to be much "use" to most of us until enough people are vaccinated against covid... with just yesterday Boris alluding to "stronger measures"... mark my words, there will be army on the street with guns - once they've all gotten into strategic locations around the country under the guise of "helping with mass testing in schools" - ... or have we abandoned that idea now... I forget... TOO many different messages, coming from too many sources.

I think this picture someone sent me via what's app, just about covers  where things might end up before too long: 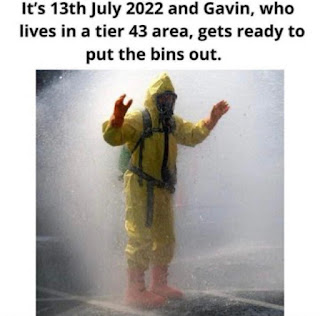 ANYWAY - back to NYE - AS predicted, I'd gone off to bed by around 10pm - having decided there was bugger all on "real" TV really worth watching, I plugged into Netflix for something or other - it's all a bit vague due to the need to finish off all the booze on the boat how engrossed I was watching the fireworks through the porthole at the foot of the bed !

Talk about loud, I think a fare comparison may be Beirut... the amount of seemingly pointless "banging" ones never ending.  OK ... I realize I'm turning (if not already turned) into a curmudgeonly old git but as I laid ( - or is that an egg?) there, I couldn't help but think HOW much money was being set on fire by families... perhaps parents under social pressure to keep up with the Jones's or compelled to ensure 'Fifi-Tricabelle or Tarquin- Bartholomew' had a 'normal' NYE.   Either way, at the end of the day, I struggled to get away from the base line of them simply setting MONEY on fire which could have been put to better use ... for all of us .  JUDGEMENTS a side, (and with earplugs in muffling out the worst of the noise) - I did perhaps enjoy the  (free for me) show a tiny , tiny bit.

God I'm a contradictory so and so.

I don't know why I compartmentalized this section from the once above as it does relate to New Years ???  (nor do I know the correct grammatical term for doing so)... OH WELL.

Like a big kid, when it snows, I love being out and about it in - (less so when driving obviously) ... actually I DO like driving in it but only if I'm the only person on the roads....

SO - I think it was NYE when we awoke to a lovely inch (yes ladies that is a TRUE inch) I got clobbered up and decided to go for a chug... OBVIOUSLY in search of a tap/services and STILL within the Tier in which I 'm stranded before anyone thinks about grassing me up.  There was a thin layer of Ice on the canal but nowhere near as bad as it had been previously.   On this occasion, rather than turning Left, I turned right and headed off towards Sale ....with HALF a mind to spend NYE in Lymm.... the biting cold (clearly I hadn't put on enough layers) had gotten to me within about an hour and half so I pulled over, had a warm (with lunch) and then turned at the earliest opportunity.  To be honest, I wa already getting sick of tow-path walkers shouting "Happy New Year" every 20 foot or so (the curmudgeon already set in for the day)  - no matter... I took a few nice snowy shots as we chugged along

The return journey brightened up a bit with a slight thaw - in fact at one point it was raining.  Still, I'd enjoyed the chug (albeit brief) and look forward to the next snowy day ... when hopefully Ill remember to wear long johns a base layer.

As we'd been chugging along, the bosun had opened the last of our fizzy stuff and by the time we'd gotten back to the pontoon - expertly reversed I might add (ergo no wind OR audience) it was agreed we'd have a 'last supper' before the impending 2 months of misery.

It was then my "Xmas present" was discussed - we'd been avoiding it for a while.   I didn't get any presents again this year from anyone other than our Christmas guest (she gave me a comedy gift - overnight oat recipe book ... mainly cause I 've moaned about not liking them so many times when she's been onboard and THEN done a U turn and decided they were the future).   SO - Santa's "joint gift" was this years (last years now I suppose) "famed diet plan" - ergo, a 2 weeks meal replacement plan for us both to kick-start our slimming with a ketogenic regime.  What that means is eating 'slop'  that is supposedly nutritionally balanced but which allows the body to use fat stores rather than glycols as an energy source.    THAT is the claim.  HOWEVER, having done  'hard core' Atkins many years ago, I suspect this isn't actually the case as far as our plan is concerned - the amount of 'carbs' in each 'meal' being too high... I Think it's actually just a very  calorie restrictive regime for people who can't be bothered/struggle to calorie count.

Oh how i already miss "proper food" - THAT said, for the sake of 2 weeks of misery, we ARE both going to stick to it and see how much blubber we can kick start - if nothing else, our stomachs will get used to smaller portions (portion control being my biggest failing) and what with that AND the DRY January, it can only be an overall good thing for my (now aging) blubbering body.  I've taken photos of the scales and tweeted them to keep me incentivized.
It may sound like masochism, but I'm using the time I'd usually spend cooking, planning 'meal prep' menus that can be containerized and stored in the fridge/freezer a few days in advance - it's amazing the variety (and inexpensiveness if that's a word) you can come up with - especially if using a lot more veg than previously.
Obviously, it's going to have a positive effect on 'guest menus' too...  perhaps we might even begin offering  "Health and wellness Cruises" - ... mind you, a couple who came across the Rochdale canal with me a couple of years ago ALREADY described the  journey as a "walking holiday over the Pennines" (I'm paraphrasing here but you get the jist) . It made me laugh at the time.
. . . . . . . . . . .
BACK to boaty improvements for a moment - the other week my friend Wendy sent me a photo (and link) to some USB  Led lights she'd gotten for her boat.  NOT so much as a festive decoration but simply additional lighting.  Armed with her link (and advice to try white over warm white) I ordered a couple of sets.  For the money, they are really good... usb (so can only draw 1.1amp max - I WILL wire in a meter at some point to check) and provide 100 lights on a 33ft string.

I've just put them back and forth until they ran out either side under the lounge SORRY, Saloon gunwales.  (100 each side) .  I even felt quite smug having already been organized enough to have USB sockets in both places to avoid trailing wires.
They EVEN come with a remote control (which works both sides at once) which allows  various "twinkly" patterns or JUST ON - (with a dimmable option) - suffice to say, when I'm sitting to starboard, they add just enough light to read without putting on "the big light" or faffing round with the flexible usb ones that I'm forever getting wedged behind my chair.

Alas, during the fitting procedure, I DID rather clumsily break my long serving Bosch glue gun - the nib had been bent a long while but it ended up "benter" ... however, on trying to straighten it, it snapped off and that was that.  A quick wander to poundland and it was replaced with a 2 quid one that may be crappy quality but it DID let me finish the job.

Thinking back , it's over a year since I used the glue gun anyway so perhaps a diddy one will do...  watch this space... if the lights all fall down, we'll know I should have gone to screw fix and bought a better one with better glue.
Right - I can't sit here typing all day - I've got 10 miles to walk to keep the 'blubber' burning - I've got old photos pasted to the fridge & larder doors to remind me (should a moment of weakness occur) WHY I need to stick to it.
Until next time...