Website woes are beginning to become an annual 'given' -  Remember this time last year when 'GoDaddy' forced me into upgrading to their "new product" ... only to find after I'd spent weeks de-doing the website that I wasn't allowed to have more than 50 pages?  Having had a strop about that at the time and then transferring to Wix, I naively thought my woes were over.   Clearly that was a dream!

WHY does it have to be so complicated/restrictive?... I mean, all I was trying to do was use one page as a template to use in order to duplicate a cruise from 2021 to 2022... simple enough you'd think eh?

Wrong!  Wix "dynamic pages" (whatever that is supposed to mean) has other ideas.  Instead of just letting my create a new one, it flagged up something about using too many static pages, TOLD me there was a better way to do it - and THEN promptly left me reading through "HELP PAGES" (an oxymoron if ever there was one) to try and find out HOW!  As it stands, as soon as I publish the next cruise, it applies the formatting to the donor page - thus replacing "Fully Booked" with " Details & Booking" (which is what the NEW page created from the template/duplicate NEEDS to say.

Are you keeping up at the back there?

In short (or should that be long?) it's a blooming good job I have a proper system "on paper" ... and by that I mean a 2021 diary that I write bookings in as soon as they've come in so I know what's what.

I suppose it's not all bad - perhaps a double booking might be a good thing - an introductory service for solo travelers... so long as they are happy to bunk up and share a bed lol.... I'm joking ! *thinks of a way to divide a kingsize bed down the middle*...

ANYWAY - back to the plot (as tenuous as ever I think you'll find)... you may recall a while back, financial necessity (i.e. 'Ellis' needs new batteries before the next season begins) suggested I put on a couple of  'festive specials'....  Of course Boris with his multi-tier status pretty much put paid to that idea (what are we up to now I forget - tier 34?)... what he didn't take into account however was that  US and a returning GUEST had 'saved' our original 'support' bubble so as to be able to guarantee a 70th birthday cruise back in September... and as that 'bubble' remained in place, there was no reason why we couldn't take our Christmas trip (regardless of any last minute amendments ) so long as we remained within the boundaries of our present tier (it may as well be tear tbh).

SO, Xmas eve arrived along with our guest who brought with her the nicest mince-pies and Christmas cake I've ever had.  I've never really LIKE mince pies - in fact, I think it's probably 10 years since I last tried one to prove to myself that I don't like them... tastes change and now it appears I DO like them... (well these at least) and off we chugged - Gluwhein in hands.

The original plan HAD been to spend Xmas eve in Castlefield basin - pretty much so we could go to the pub and people watch... alas, "tier 3" meant no pubs were open so it would be a pretty much miserable place to be ... with only train noise for company.  THAT plan abandoned, we turned left at 'Waters Meeting' and chugged on to Worsley.  Having tied up outside a (closed) Hotel, we settled down for a Christmas Eve with plenty of wine/cake and 'nice-ness'.
It made a lovely change to have a REASON to have a Christmas - not since I was a child have I found it pleasurable ... Then it was a lovely magical time when even my father who seemed to work 24/7 was able to pause, spend time with us and even do a jigsaw.  SINCE childhood however, it's just been a few office xmas **ss ups and miserable feelings. 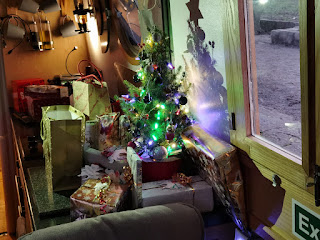 This year however, with a purpose, it felt lovely... good company, nice food and drink and being the envy of folks walking along the towpath - all having a nosey in the boat as we sat snug (and smug) inside with the fire blazing and our glasses regularly full.
When we awoke on Christmas Day morning, the canal had frozen over slightly but it didn't appear thick enough to remove too much blacking... or at least not where we were - the reality being that once around the corner, it became about half an inch thick and by then we were committed (or should that be we SHOULD have been committed?) ... oh well.  Looks like it's gonna have to be done again next year anyway. 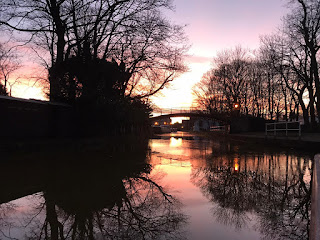 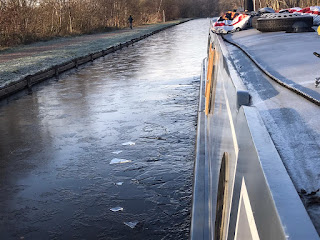 I suppose at it's worst, it was about half an inch thick which whilst not too bad, really did slow us down on our journey.
We still made it to our destination (Pennington Flash) shortly after lunch and on turning round at Plank Lane marina, bumped into a couple of boaters we know from the Leeds & Liverpool canal... Neil the fender making man and his lovely wife who I can't for the life of me remember what she's called...  They were hunkered down making use of some hedgerows shelter in preparation for Storm Bella .
We turned, and went back to the nicest view point of the flash and (having firmly banged in pins) I set to cooking Christmas dinner whilst Chrissie went for a walk and the bosun tried a few Ariel shots with his drone... turns out, minus 1 degrees doesn't half gobble up battery power so that was a short lived experience.
Whilst dinner was cooking (Leg of Lamb, Gammon Joint and more veggies than were really required) we had a few drinks, watched 'Liz' on the telly (or was it a zoom call - I can't recall ;-) ) and eventually had our dinner around teatime.

Once we were satiated (and the washing up done) it was time for silliness... "pass the sprout" should have been more fun than it was... the previous time this was enjoyed being 4 years previous at Sally's xmas afternoon party"... ALAS, either I bought the wrong thing, or it's been dumbed down now to little more than "cracker jokes & paper hats".....hmmf.

Oh well... given how the rest of 2020 has been, it was only to expected .
Boxing day needed to be a good start due to the weather forecast - Chrissie was on Breakfast duty and once we were full, I got all clobbered up with appropriate external clothing ... only to find that it was no where near as "bad" as the forecasters had been saying it would be...
In fact a nice chug back to Manchester - stopping off briefly for a cheese and biscuit lunch and few glasses of wine.  The predicted weather eventually arriving during the night.
To summarize, for someone who really doesn't like Christmas fuss, it was the nicest one I've experienced for many years... certainly since the last time I was away on a cruise over the holiday season - I DO miss cruise ships... then again I suppose, I now LIVE on one full time (albeit a tiny one) lol.
See you next year - enjoy your "night in"... I shall be in bed with ear plugs by 10pm and then ready to begin Dry January  *quivers*... AND  a hard 2 months ahead to try and shift the blubber 2020 has helped me pile on - 2 stone needs to be gone by the start of the boating season... I think it's fair to say I shall be VERY grumpy for a while now as I don't "do" hungry very well.
Happy New Year -
Until next time...
Posted by Quaysider at 10:33

...been meaning to leave a comment. Let's hope we have a 2021 we can enjoy and only look forward with lessons learnt globally, internationally locally and personally. Happy New Year