That burning feeling, Way too much varnishing and Wading!

There are some things I really don't like doing on the boat.  No, it's not emptying the black water (although that can be a nuisance) ... ONE thing is sanding and varnishing .  Mainly cause I can never get the matt look I like - even when trying with the 'Satin' effect varnishes available.  The water based Morrells that I've used inside from the beginning really hasn't been as good as it should have been... (FOR the cost anyway).  The side hatches windows have suffered water-staining (through poor user operation I suppose) and the panels on the outer hatches pretty much the same.

Id' been putting doing them off for ages but a brief window of nice weather meant I HAD to pull my finger out.  Unlike last year, THIS time, I took them off and outside to sand them down on the workbench.  A bit of a faff I admit but it kept a lot of the dust out of the boat.... not that you'd notice given how much the fire creates.  It's funny but when planning a boat, you convince yourself quite easily about how lovely a coal/wood burning stove is... cozy, welcoming etc.  It's true of course but the reality is that it creates MASSIVE amounts of dust everywhere... that no sooner have you cleaned  away, returns and jabs 2 fingers firmly in your face.  I digress.

I sanded down the windows as much as I dare to remove the grey stains - any more would have left 'dimples' in them and then put them back on to varnish.  Having decided the stain effect really WASN'T, this time it was all I could get in Wilkos.  I've managed 3 coats so at least they are protected for the season... NOT a brilliant/neat job but they'll do.  I've also decided that NEXT winter, the outside panels are going to change from wood to Grey... that'll make it easier for future years.

Sod's law dictates the photos are showing back to front order wise but you can work it out I'm sure lol.
Whilst the mild/dry weather was here (it's gone now btw and as I type this it's absolutely chucking it down like something out of a horror movie) I thought it wise to touch up the blacking down to the water line...  MUCH of last years now having come off.  Thing is, I can't reach down to the water line easily and after doing all I could, my back was really not happy.  Port side I had a solution for the last bit that sticks out beyong the floating pontoon - get the waders on and climb in.
A simple enough plan and in theory easy win.
Hmmm - I'd intended going in at the stern and then wading my ware around the front (out of sight of the marina incase things went belly up)...  it was obvious when I climbed into the water that the mud was VERY deep.  I'd not got even halfway down when I chickened out - the water being up to within an inch of the top of the waders (nipple height) . 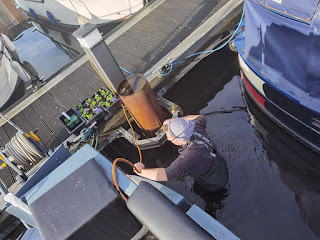 and boy it was cold.
SO, plan b...  reach down from the bow as much as possible to to that bit and then take the boat alongside the marina diesel point when they closed for the day (3pm) and slap some blacking on then.  Which as it happened went ok - I made another school boy error of also touching up the paint work TOO close to the dew point - ergo, it dried to a dull finish ... If I'd been able to do it earlier in the day before the temperature dropped, it'd have been ok.

Staying on the diesel point overnight, I chugged back to the pontoon the following morning and went in head first - so as to be able to do the other side...   Obviously the same problem would occur with the port stern as the starboard bow (check me out - I sound like Star Trek).

Trouble was, the NEXT nice day, a broken down boat was firmly ensconced on the diesel point... which left me back with the idea of trying the waders again - THIS time from the back of the boat  into the channel. Using the pole off the roof I tested the depth - the sun being out meant I could see a firmer bottom... Which as it turned out it was... so THIS time, I climbed off the end of the pontoon "in public" much to the amusement of the nearby boaters... no mater.  Armed with my floating tin of black, in a bain-marie of warm water to ease application, I had it done in no time . As I was doing it, a boat sped past causing a bit of a wave to swamp my waders... karma dealt with that shortly though as on it's reverse to turn, it's prop fell off! - I even tried to help find it in my waders but it DID get too deep then.

One thing to bear in mind when in the water in February in Waders... TEMPERATURE... I wasn't in long but it really was freezing.  I really should have been wearing trousers rather than shorts I suppose.  Then again - given only a week or so before it had been frozen over for days, it's no wonder .

Jobs done, (I do tend to work in a messy clutter)

I went off for my daily exercise (I'm still managing 10 miles a day but eating and drinking what I like - the result being the fat is no longer being lost but nor is it going back on ... for now.
I came across a trolley that had been fished out of the canal - it just goes to show that even in the current state of covid hysteria, folks still have a sense of humor - I chuckled about it all the way back to the boat.

Oh I nearly forgot ....  remember that replacement battery powered TV I got recently? - well, whilst it's been working fine, the other evening I had reason to fiddle with the ariel (the boat was pointing the opposite way around to usual) - having rotated the ariel outside to point the right way, the picture was still rubbish... so I did the "remove cable from tv, blow in the hole and put back in" thing...  ONLY to discover the coax was melting at the back of the telly.
This threw me.   First thought was the amplifier had gone belly up - so I quickly checked it and all seemed fine.. then I checked the other 2 tvs plugged into to it... all fine there too.    On testing the Ariel socket on the new one, I found it was showing  5.3 volts....  this in theory can supply power to an amplified Ariel but must have been finding a way back through the ground on  the coax to the boats batteries - ergo, enough power to melt the cable.  Thinking logically about it, since I got the telly, I've mainly been watching netflix so the power to the ariel hadn't been activated by the telly.  With no obvious way to turn it off in the online menus, I had a paddy and decided to get in touch with amazon to return it.  THAT was a bit of a faff too but in the end it's gone back to be replaced.

More worrying I suppose was that HAD it been on for longer/I'd fallen asleep, it might have gotten hot and melty enough to set on fire and burn the boat out... rest assured, I will be testing out the replacement as soon as it arrives.  Meanwhile, I'll be getting on with more external painting touch ups as soon as the weather allows.
Until next time...