All sorts - updates, 'yellow sticker vaccines' Summer and Winter all in One week...

Ok - I know that has to be one of my crappiest titles...  thing is, if I spend too long thinking about them, I forget what I was about to type... perhaps it's an age thing.

Righty ho.  SINCE my last rambling (eek over 2 weeks ago), loads of bits and bobs have happened.

As planned we left the luxury of shoreline on 22nd (actually I think we planned on the 21st but as that was a Sunday, we'd not be able to give our key fobs back and top up the diesel tank) and chugged off in the direction of the Leigh Branch of the L & L.  Another boat (newbies) left at the same time as us and we followed them for an hour or so until they got too cold and tied up for the night - we, pressed on and after stopping briefly in Leigh outside Aldi to top up the heavy stuff,  continued on to Pennington Flash.

Moody skies but a lovely view none the less

The bloke who seems to have taken up permanent residence on the other side (and runs his genny until late) is STILL there...  I'd like to live and let live but these folks really do take the proverbial.
You may recall, the main reason for leaving the marina a week early was to test out the batteries to see if we'll get away with this season from them  - first morning  they were at 80 % with the inverter having been on power save mode.   HAVING no shame in regards 'towpath laundry', I ran a load through and then got the little genny out to top up the batteries... I even tilted the panels to make the most of the available solar.

The next day, we chugged on a bit - planning to fill with water and then head to Scotsman's Flash... the sun was out and all was well with the world.
Halfway to Wigan,  I received a text message from my doctors to say I could book a covid jab - either Thursday (this was Wednesday) or Sat Morning back in Wakefield.   Having travelled from Wigan on the train to Wakefeld a couple of years ago, that was going to be a pain - so, mid afternoon, we turned back and chugged back to Manchester ... mostly in the dark.  Besides it being cold, it was a lovely journey. 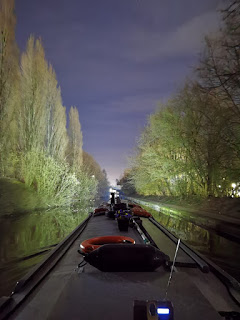 We pulled up outside Old Trafford (underneath the Hotel Football) and spent the night there - in readiness to collect a hire car from Enterprise about a mile's walk away.
When I arrived at the vaccination popup place, I was in and out in no time - replete with my first dose of the AstraZenaca vaccine.

I enquired as to how come I'd been called 'early' - (I'm under 50 obviously) and was told quite candidly that the stuff I'd just had injected,  was going out of date on Sunday ... ergo, I'd just had a 'yellow label' jab.lol.  This tickled me and not one to look a gift horse in the mouth, I'm pleased it was used rather than binned.
Next day we travelled into Castlefield Basin (to fill with water) turned and then headed to Sale for a couple of days before we set off properly on 29th (when the "stay at home" order ended).

IT was nice enough being moored outside the Kings Ransom for a couple of nights - tbh , I did feel a little under the weather but like I said to the Bosun, back in the days of 'working' I've driven to London - done a days work and then driven home feeling MUCH worse.
On 29th, we pulled ropes and set off to begin our now elongated journey to  Llangollen  - to be in position for when we are allowed to take guests... I'm losing my patience now with crt  as they've not even started work on the landslide blocking the 'normal route' AND - have closed the only other route available.  More about that later.

We stopped for lunch in Castlefield Basin and just as we were about to set off, a boat went passed which meant we could share the Rochdale 9.  THAT was a relief as having done them on my own the other year, it's SO much easier with another boat.
On this leg of our journey, we were joined by our 'bubble' lady.  Last year, we agreed to form a bubble with our most returning single guest - neither party has deviated from this so we weren't breaking any rules... and as all 3 of us have been jabbed anyway, even if we had done, there'd have been much less risk than a trip to Tescos *other militant supermarkets are available*.
She'd brought along a rather unique  birthday cake for the Bosun (the 29th being his big day)

Bonkers as it may look, it was based on things he likes (being a fussy eater) such as white chocolate and Mince-pies.... scrummy!

WE charged our way up the 9 in record time - the crew struggling with a couple of gates but tied up safely for the night in Telford Basin before an early start up the Ashton the following morning.
The Ashton was a grubby as ever but no major hold ups presented themselves and we made quite good progress....  we stopped in Droylsden to fill with water and as the sun was out, we went beyond Portland Basin (which HAD been our planned mooring)  - almost to Marple Aqueduct before trying up for the night.

Next day was glorious and we worked our way up the Marple flight at a leisurely pace - stopping off for lunch mid way (well it was quiet enough not to cause a problem for anyone) and once at Marple, we reversed down the end of the Macclesfield canal to top up with water and (once again non-moving boats were tied up on the 48 hour moorings) then set off towards Bugsworth Basin.

We tied up for the night not far from Strines and the Bosun got his drone out for a couple of shots... only to be accosted by "Mr. Angry" in a house not far from the canal who felt the need to express his dislike of drones invading his privacy.  He didn't even HAVE his house in the shots and anyone who has a baby drone will tell you, you DONT have a zoom function to look at him in his underpants of whatever...  I fought back and politely explained we were just taking shots of the boat and it is perfectly legal to do so when not in a no-fly zone. 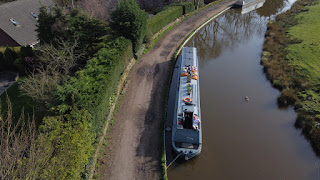 Enough for now - I'm afraid my next missive will include a bit of a rant about the NOW CLOSED Macclesfield Canal.., which we NEED!!!!
Until next time...
Posted by Quaysider at 09:25

Correct me if I'm wrong but I thought the CRT requirement to move is suspended until 12th April? In the first lockdown we spent 2 months on a 48 hour mooring at Hurleston.

Good luck and fingers crossed for the Macc opening.

tbh, I don't know for certain what the "rules" are but surely as a CCr, when Boris said it's ok to move, anyone supposedly trapped for months on end would have relished the opportunity to move. Had I been out on the cut, rather than in a marina, I'd have been off like a shot and NOT hogged spaces for genuine (and legitimate) boaters travelling around.

AS for the Macc - they haven't even started it yet so it's gonna be more than a month at best when they do. Ergo, we are trapped and unable to be in position for when we're allowed to begin trading - another year messed up AGAIN by CRT rather than covid.