A Birthday boat trip...on a budget!

It was Andy's birthday on Friday (38) - and as planned, we took a weekend trip to Leeds on the boat with our friends Sally and Lee.  Well I say Sally AND Lee - he couldn't get Friday afternoon off work so took the train to Leeds and met us there on Saturday afternoon.

We got VERY lucky with the weather with glorious sunshine but bitingly cold.  I had warned them to bring warm clothing (for the chugging) but once the wine came out, the dropping temperatures didn't really matter. 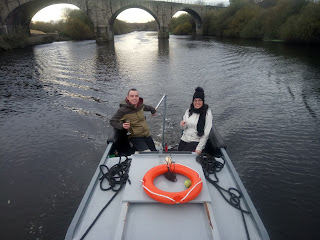 It was a good opportunity for us to practice having a couple of people on board for a few days... to see how we'll all cope in a small space.  I'm pleased to report (at least from OUR point of view) it was quite easy... and would have been easier still if I'd been a bit more organised tidying out the back cabin en suite before we set off.

Leeds from Wakefield takes about 7 hours if you're not rushing... which means about 8.5 litres of diesel (according to the engine  manufacturers official consumption figures...) THAT means, at 64.9p a litres (red diesel) a rough cost of  £11.03 for travel, hot water and power generation for 4 people for a weekend.

Given we didn't eat out either - I also took the opportunity to try out a few veggie meals (Sal's not a meat eater) it meant for a very cheap weekend away.  OK so a few gallons  we had a couple of drinks here and there but never the less, it's a lovely way to spend time with friends. 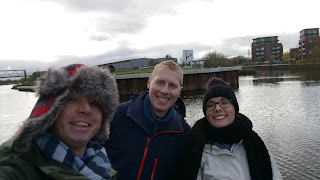 We over-nighted again in Woodlesfood and continued into Leeds on Saturday morning... we were even escorted by a kingfisher for a few hundred yards - if you have VERY good eyes (or a good imagination) you might be able to pick him out perched on a scaffold pole! 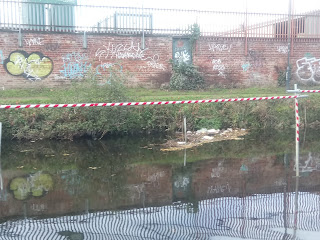 It's typical that none of us had a decent camera with us other than our mobile phones...  we are going to HAVE to get a good one with a good optical zoom.  Phones are fine for snapping away but it would have been lovely to get a "proper" photo of the kingfisher.

When Lee arrived on Saturday afternoon we sat at the back of the boat people watching and having a few drinks before I set to and did my Nigella bit in the kitchen...  substituting Leeks with Spring onions and sweet potatoes - the local Tescos NOT selling Leeks.  Once we'd eaten our tea, we headed off out for a couple of pints - unfortunately, it had escaped our notice it was Saturday night and the pubs don't seem to encourage conversation over drinks... either that or they assume that "young" people use sign language to communicate.  We took our battered ear-drums back to the boat quite early on and played cards/watched telly until the sandman did his thing.

The return journey on Sunday began in glorious sunshine again... blooming cold and when we stopped at Leeds service point on the river to fill the water tank I nearly slipped in on some ice.  That was a funny sight - apparently!  BEFORE that, I'd already gotten a bit of a soaking in lock 1 on the Leeds & Liverpool canal where it leaves the Aire .  I have a feeling I'd read these locks are to be replaced in January - long overdue by the looks of things... 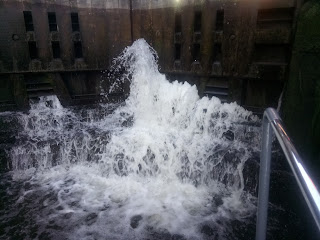 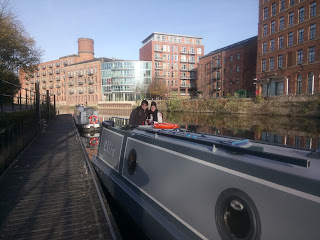 Once off the river and back on to safer cruising ground, Lee was keen to have a go at the tiller... well, I'm not sure if that was because he felt safer on the canal again OR the Desperado's he was supping gave him the courage.

EITHER way, he took to it like a natural - certainly steering a much straighter course than either Andy or I tend to. 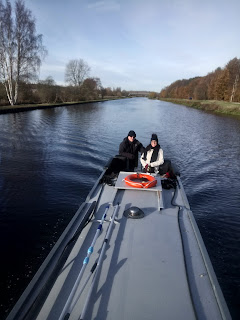 We lunched as we chugged (another vegetarian triumph I might add) and arrived back at Stanley Ferry just before dusk...  No time to get cleaned up though as tea in the pub was calling and having been treated by them to food and a little more libation, we said our goodbyes and were back on the boat in time for bed.  A lovely relaxed weekend which we'll try and do again soon.

Sadly for them, Monday morning saw them going off to work whilst Andy and I were able to luxuriate in a warm fire and More of Nigella's poached eggs!... MORE on those to follow!

Nice one Mark,
see you have the dates up for the Hotel boat next year on the website was there a price there perhaps I missed it.
Cheers
Ade

Hey Ade... sssh - the website is still a work in progress *read I'm not very good at building them* - I plan to tweak the dates a bit - it's a lot harder than we thought but we'll get there. Later this week (with luck) I'll re-do it with links to individual weeks and prices etc. as it's bit heavy reading all on one page.

Ah get you looked ok to me does what it says on the tin you don't need bells and whistles leave that to those who have nothing better to spend their money on. Guess you want it best you possibly can though.