It can't be a week since I was here? - surely not!

oh well - calenders don't lie I suppose.  Trouble is, these days my memory is not what is was so sitting down to write a catch up is going to be quite tricky.

LAST week (Wednesday I think it was) I got a call from Sheila next door, to say 4 heavy parcels had arrived for me.   As it happens I was on route to the tip with a drum of used oil so once I'd gotten rid of that, I detoured via "home" before coming back to the boat. 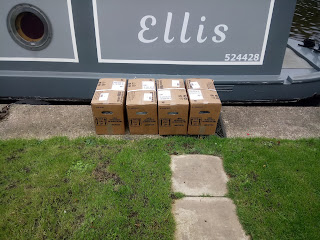 It WAS a bit of a struggle lifting the ruddy things, but I managed it and brought them to the boat.

In an ideal world, I'd have bought GTP, TROJANS or LITHIUM... the latter of which are RIDICULOUSLY expensive.  FINANCIAL Reality bites though and I figured given we'd ruined a set in a little over 12 months, we could just as easily ruin an expensive set as a cheap one - ergo, £339.36 for 4 x 130ah batteries (inc delivery) was a (just about) tolerable expense. 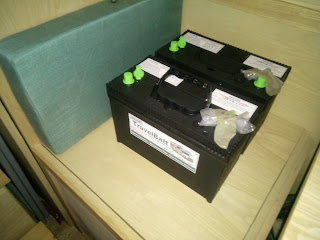 I had to wait until Andy wasn't working on Thursday morning to remove the old ones - them being bigger and heavier than their replacements, so, as the fire was running, I thought I'd bake some bread... yes I know this is not related to batteries but the outcome was quite good so I thought I'd share with you. 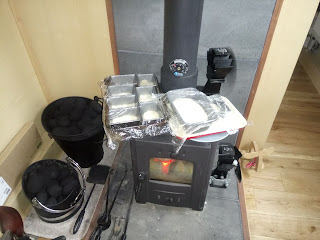 SO - back to the batteries... I crawled into the engine hole and undid all the terminals, AFTER I'd disconnected the solar panels and Andy helped me to lift them out of their positions and on to the back of the boat.

Rather annoyingly, in the process I thought I'd lost one of the terminal clamps so had to break off and go to Halfords for a replacement.... which turned into a bit of a nightmare as despite them having one, (I bought 2 just in case) - when I came to fit it, the "post" turned out to be too big for the connecting wires... ergo a slight bodge different way to connect them had to be found. 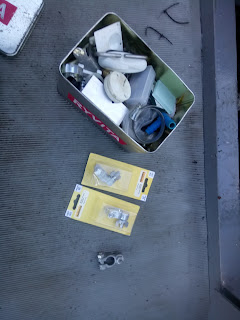 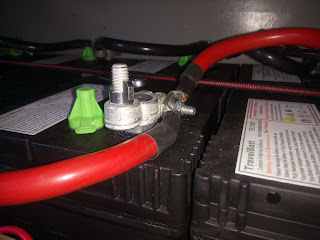 It's hard to see, but  I had to find an m6 long bolt to attach the cable to - this required rutting through old Mick's box of bits and bobs AND (when he didn't have one) scrounging one of Mark on the boat behind Mick...  It wasn't until I got to the final group of wires, I FOUND the missing  battery terminal clamp where I'd used it earlier to keep the bundle of cabling tidy.

Yes - I DID undo the bodge and re-instate the original wiring.

Once all back together, I had to reset the smart-gauge to tell it the new bank size and type of battery...  That in itself is a bit of a faff cause you need 2 people to do it really...  luckily, Andy was still in amenable mood!

Finally, I re-configured the combi-charger with the new battery bank size and type also in preparation for a full charge.

All this had taken 2 hours (probably and hour and a half LONGER than it would have, had I not mislaid the connector.  The plan then WAS to get the generator out and charge fully... HOWEVER, as the sun was shining, I decided it would be a nice day to go for a chug.  I went towards Woodnock lock and did 2 locks single-handed before my return to the mooring. 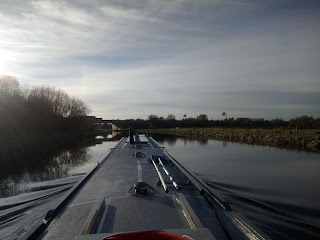 As I came over the aqueduct, my phone went beep and it was my friend Sally who was in the pub... well it'd have been rude not to moor up outside and nip in for a quick one.... which turned into a couple and subsequent message to Andy to advise him I'd moved the boat to outside the pub for the night (by this time he'd gone to work) where he later joined us for a convivial evening - DURING which, a plan was hatched for a boat trip to Leeds this coming Friday for his birthday where Sally and her fiancée Lee will join us and pretend to be customers...  Luckily they both drink like fish  appreciate the odd drink so will be easy company.  NOW of course, we just need it not to rain and send the river into flood.

Oh - before I forget... SO far, the batteries are doing well...  they get to 100% with about an hours am charge, solar top up and half hour boost at tea-time each day - only dropping 10% from dusk till dawn and that's even with the webasto coming on for 2-3 hours on a morning.  LONG may it continue.

But what about the bread? No photos of the finished loaves
Pip

ahem well, it was lovely... didn't last long enough to photo! I think from now on, I'll make it every other day rather than buy the stuff AND at least I know what's in it!

Good for you, but how much did you make? It looks like loads. Nothing better than fresh cooked bread.

it was only enough for a 2lb loaf... split between 8 mini (breadbun sizes tins) and a meatloaf size. You're right though... I WISH we could afford lurpak - Clover had to suffice.