Ice-breaking...keeping a promise and that list of jobs (including 2100 hour service)

The trouble with being "off work" (forever) so to speak is that you can't use 'work' to keep your mind occupied.  I thought I'd be able to distract myself with the general rubbish swirling round and around my head so as not to be stuck in the random 'burst into tears' limbo mode  - as of yet, that theory is yet to prove itself.  MUCH to my annoyance.  Apparently it's normal.    Another new one for me... being normal.

I think I'm doing a  bit better now at fighting the need/urge to tell everyone I come into contact with that my mum just died - i can't explain that one... but since the second I got the phone call, there was an inbuilt need to tell people... dunno why...perhaps attention seeking - then again, that's also out of character ... these days I prefer to blend into the background... certainly compared to my younger days.

Anyway - here we are... the world keeps on turning and 'stuff'' has to get done.

The first important thing was to get the oil and filters changed... they were getting a little over-due (just over 20 hours) but the freezing weather had been putting me off doing it.  On Friday morning I bit the bullet and got to work in the engine bay. 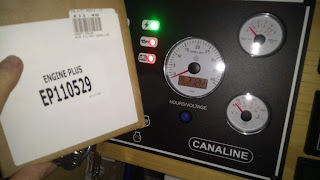 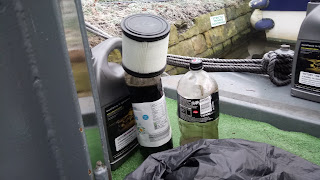 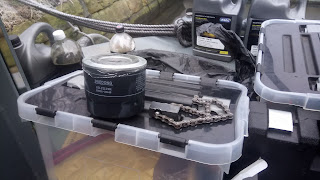 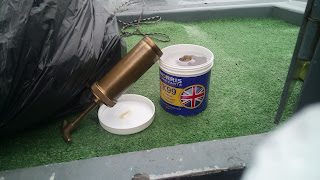 I even finally had to break into my 2nd tub of stern Reese - the 1st one lasted over 2 years.  I suppose that's a good thing - indicating not much is needed to keep the bilge dry.. well I say dry, there WAS a load of water sloshing around down there but that was still in there from Bingley the other week... I'd not gotten around to throwing a couple of nappies down there yet... it's now done - well it had to be in order for me to get in there to remove the oil filter without getting soaked.

Once the servicing was done, next on my list was (luckily inside in the warm) to make a grab handle for folk to pull themselves up out of the boat.

"Eddie inspired", I set to and spliced a couple of eyes round some brackets courtesy of Srewfix *other hardware stores are available but not as handy*.... once I'd tied a couple of knots in the rope to stop hands sliding down, I fastened it near the back door and whilst not BRILLIANT, it's better than nothing... I THINK next time (given this is a prototype) I'll splice in a mini fender that Andy has now become so proficient in making and that can be used as a handle to pull on. 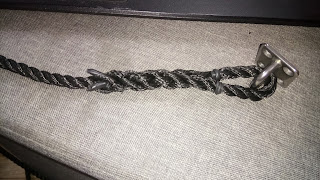 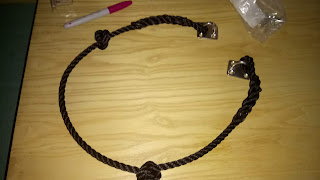 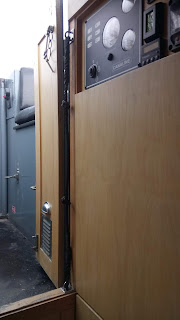 After a day of jobs, darkness was soon upon us and it was 'time' to continue with a promise I made to my mother along time ago...

10 years plus ago, one morning whilst on route to the dentist (near the family home) I called in for a cuppa and chat with mum... coincidentally, at the same time, my brother popped in.  NEVER one to miss an opportunity to hold council, mum made us both sit down as she wanted to ask us something very important... mainly, to get us to promise that when she died - (she always planned on going first... quite candidly... ) that we'd look after Cliff and make sure he didn't become a neglected, dirty and lonely old man.

At THAT time, he was still working 24/7 ... hadn't learned to cook, or use the washing machine etc.  To her, it was important that because she'd been a house wife and he'd never HAD to look after himself,  she'd wanted assurances that we'd do our best to take care of him...  she also wanted us to promise not to abandon him emotionally as despite his (at that time) somewhat hard exterior, he was/is a sensitive and gentle soul.

FAST forward 10 years plus, and here we are - the difference now being that SINCE that request, Cliff HAD learned to cook/clean/keep house and HAD become Joyce's full time carer... ergo, the physical side of things were no longer an issue.

The 'keeping in touch and  talking to him aspect ' NOW being more important than ever.

It's difficult trying to get a feel for what is molly coddling verses appearing un-caring..  It's only been 3 weeks since mum died and initially (when not there in person) I phoned up at least once a day to talk with him.  Father and son telephone conversations have never been comfortable for either dad or I... mum used to randomly put him on the phone and sort of force us to chat - perhaps her way of giving us both a bit of practice.  It clearly has worked as although our conversations ARE strained quite a lot of the time, we are BOTH trying to  continue them... quite a few silences here and there but so long as HE know's I'm on the other end of the line and vice-versa, it HAS to mean something... to both of us.

I AM mindful though, that his network of peers, family and friends are ALSO constantly phoning or calling in to support him and as such, still find myself trying to skip a day or 2 to GIVE him the space he may (or may not) want/need.

Short of asking him "hey dad, how often shhould I call you?" I don't know how else to play it...  For now, it's every other day... perhaps every 3rd day and we'll see how it goes.   I try and talk about mum and things I've read in her "life books" she'd written for my brother and me - GOSH he was a sickly child... always calling out the doctor when he was a baby due to asthma ... no wonder she hates/hated that he began smoking... and to this day still does.  It must have felt like a slap  their faces him willingly poisoning his lungs after ALL the care and effort they'd put in to keeping him alive as a baby/child.

ANYWAY - this world keeps on turning and our 2 weeks at Stanley Ferry were up on Sunday morning...  Topping up the water tank, off we set up to Wakefield town.

A cold but bright day 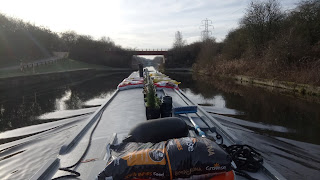 and the river section was lovely...  until we came to Fall in lock - where "ice" presented itself... 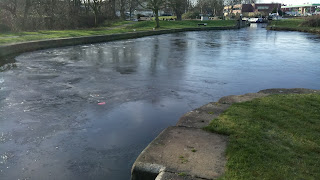 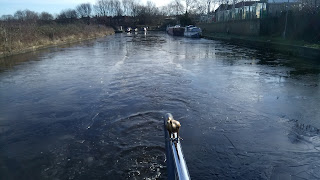 We've been ice-breaking before ... on a hire boat down in Daventry a few years ago... it seemed "fun" then... it's NOT so much fun when it's your own boat and YOUR blacking that is getting scraped off... ergo, once we'd gotten around the corner, we pulled up and whilst planning on spending  few days on the visitor moorings opposite the pub, decided that the sun was too low there to hit the solar panels so moved to behind the flood lock off the river. 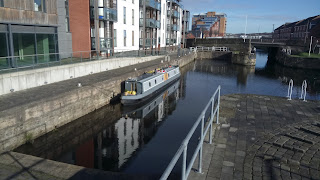 Nicely in full sun (if it's out) all day.... at one point I noticed 18 amps going in from the panels which for the time of year is splendid!

It's here we'll stay a few days now  - Docs appointments and deliveries to the bungalow before we continue our trip up to Huddersfield and beyond.