Sorry I'm being a bit rubbish re.blogging at the moment - to be honest,  a side from grieving and doing the odd chore, we're just mooching around until the stoppages are over and we can get going again.

The winter stoppage season has really frustrated me - I know this is our 3rd year experiencing it now but it seems far harder than previously... probably because since giving up our mooring there's an expectation/desire to actually travel SOMEWHERE rather than just play the game a lot of cc'ers do - IE. shuffling around a few miles every 2 weeks.

Obviously, my mood isn't being helped by trying to work through the grief of my mothers death ... I'm not sure whether I'm handling it well or not but still feel the need to randomly burst into tears for very little reason - it seems EVERYTHING ...often not even related to mum, seems to upset me.

Even when out chugging - quite often when I was waiting for Andy to ready a lock, I'd use the time to make a quick phone call or drop her a text... instinctively I keep grabbing my phone to do it only to remember she's dead.  It feels really weird and I'm instantly catapulted back - umbilical grief I suppose.

Another thing I'm finding difficult is night-times inside the boat...When it gets dark out and we close the side-hatches and light a few candles with the telly on, my brain keeps replaying the phone call from my cousin at 8 minutes past 8.... no longer does it feel like a cosy night protected by the boat - instead it's a milestone that needs passing every night.  Once its a bit later - assuming I've not had a drink, it's not so bad.  The sooner the light nights are here and we're pottering out and about the better.

I know as time passes things will improve and compared to many folks I'm very lucky.  It doesn't always feel like that though.

Dad is (on the surface at least) adjusting to being alone - we're still talking regularly which is a good thing and he's being candid about stuff...  Even my brother and I are still communicating more often than we have in years... without writing in cliches, good can come out of bad.

ANYWAY - to bring things up to date...   After a lovely couple of unseasonably mild days in Woodlesford, we pulled pins and chugged up to Leeds on Sunday lunchtime... not before the Freda Carless went by. 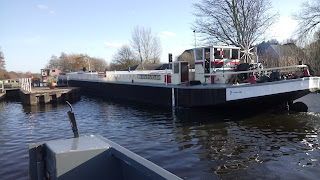 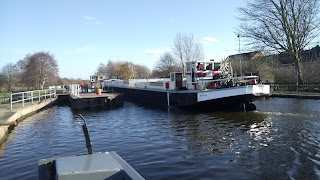 I'd been chatting with the bloke that owns it the day before when he knocked on to say he'd seen my you-tube clip of them when they passed our home mooring a year or so ago.  Quite a chatty chap although a little too full of conspiracy theories for my little brain.

Not long after they went by, we sett off the other direction . We'd hoped to be able to get tied up in Clarence Dock on the Shore-line ...  OTHER "non-moving" cc'ers (who are not even plugged in) put paid to that idea,  so once again we ended up in Granary Wharf.  As it stands, we're the only boat in here - well I say that... there ARE actually 2 boats "dumped" ... 1 of which has been here since the end of last summer!!!  I'm not going to harp on about it but it really does get under my skin and is the reason WHY CC'ers have a bad name... the few that spoil things for the many.

Chore wise, the chimney needed a sweep and the fire a good clean out - given how mild it's been, it seemed like the perfect time to do it... I even took the riddler apart and gave the whole thing REALLY good hoovering.  Whilst it was out, I've also sanded down the  top and given it a couple more coats of stove paint.  Whatever the stuff is I'm using this time, it's no where near as good as the first stuff I bought a couple of years ago - That said, at least it looks a bit smarter now .... despite it not bearing up to close inspection. 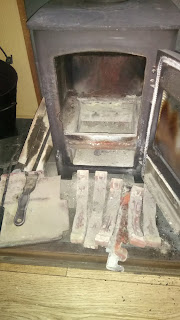 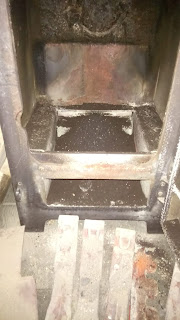 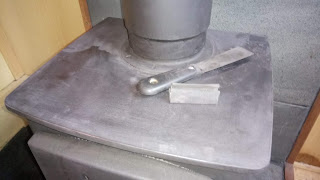 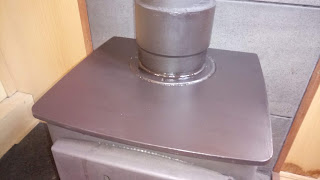 THIS time, rather than putting the eco-fan back on we're waiting until it's had a couple of "hot" fires to harden the paint... last time it blistered.

Also whilst in Leeds - (initially outside the Double Tree Hotel - well until their AWFUL outside "dirge" music they insist on playing got so loud we couldn't filter it out) I've touched up the blacking on both sides and also a few of the worst offending scratches in the paintwork... this did necessitate an interesting pirouette in the wind, but as is typical when no one was watching, it went REALLY well!

After 5 days moored outside the Hotel, yesterday morning we nipped back down the river to the service point to fill up with water and take a peak into Clarence - in the hope that someone had vacated an electric point... no luck again though so we chugged back up and this time have gone into the "private" dock (still within Granary) that belongs to Granary Wharf company...We'll probably stay here until Monday morning and then begin our SLOW journey back towards the Calder and Hebble in order to be as close to the  stoppage that stopped us by the 15th March - WHEN it's due to open again.  IF for any reason it's late, we'll have to adopt plan f ... which I think is somewhere along the lines of turn around again... head up and over the L & L, down the Leigh Branch and into Manchester that way... assuming the stoppages on the L & L (Kirkstall and Burnley ) are over with by then... IF not, we'll have to go the other way and tackle the Trent.

Who'd have thought SO much planning would have to go into the "relaxing pastime" we know as Narrow-boating?

I presume you have seen this? Now you can get cruising at last!

Update on 24/02/2019:
The full extent of the wash wall damage could not be determined until the canal was drained. This was not as extensive as originally anticipated. In addition, the unusual good weather has accelerated the lime mortar repairs and enabled the work to be completed earlier than expected. The navigation is now open.

Yeah - I got this email from them last night I think... ERGO, tomorrow we leave Leeds and head back the way we came - NOT gonna try and alter Standedge until we get at least to Mirfield though.