After a few days hanging around behind the flood gates off the river Calder, we finally were able to make a move and set off upstream towards Huddersfield.

The sun was shining and off we went - leaving Broad Cut  on the most mildest of February days you could ever want. 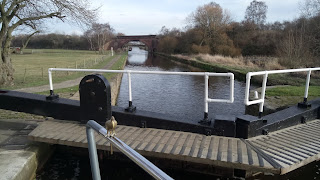 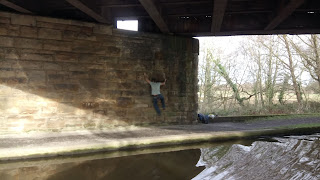 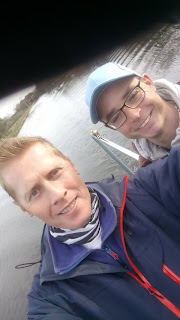 We weren't the only ones enjoying the unseasonably mild weather - we came across a chap - presumably practicing  free climbing in relative safety under a disused railway bridge.  He only got a few feet up before we went passed and I was relieved he abandoned it - well I can only do so much with my "Mr Bump" plasters!

We' had a late start as we'd been back into town (on foot) to pick up some post from the house - ahem... POST I didn't really want... 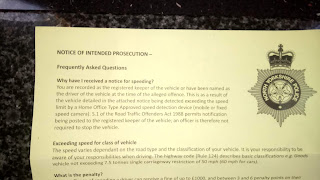 yep - a notice of intended prosecution for speeding in the hire car on route to mum's funeral.  I won't lie - it was me and the reason I was speeding was that in the process of buggering around trying to work out how to use the cruise control, the car got a bit carried away and the next thing I knew Andy had spotted a camera van on one of the motorway bridges - ergo, I'm about to be another 100 quid worse off and receive some penalty points.  They may offer a 'speed awareness course' but quite frankly as someone who struggles to even do 3mph for 99 percent of their travelling life on the boat,  I can think of better ways to spend a day..

It has occurred to me try and appeal the fine - in the hope that if I put the purpose of the journey some kind hearted person in the office might delete it? - then again, knowing my luck it might make matters worse... I'll just find my cheque book and pay up.

ANYWAY - as I was saying, we left early afternoon and our aim HAD been to get as far as Shepley Bridge to spend a week or so there...  HOWEVER, CRT winter stoppage program had other ideas....

You see the thing is - I KNEW there was a stoppage just after Dewsbury double lock coming off the river ... BUT because our original plan had been to leave on 4th April my "brain"  had filed it under 'not relevant' and forgotten all about it. 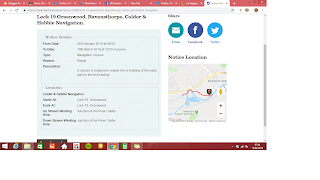 When we tried to turn off and leave the river, we came across locked gates, a drained pound and notice saying "closed until 15th March.  This tipped me over the edge and I ended up in floods of tears - inconsolable for a good hour as we turned and headed back downstream whence we came.

I'm really not myself at the moment - I know that grieving takes time but to have a melt down over something so trivial really bugged me.

Having first gone on to Castleford (for a pump out as Wakefield's machine has been dodgy for a while now - despite it supposedly being mended several times) we then decided as it was such a lovely day again, we'd chug up the river as far as Lemonroyd... which THEN turned into Woodlesford as it really was a lovely day to be out boating.

Today finds us moored up and doing cleaning jobs - well I say US - tbh, I woke up about half 3 this morning and couldn't get back off so have been moping around feeling tired and sorry for myself all day whilst Andy has washed the boat down and as I type this is currently applying paint stripper to the starboard porthole surrounds that a certain Ginger (not to be named) might have made a mess of when he was painting a a couple of years ago now (eek)...  Hopefully given how tired and sad I've been all day, I'll sleep better tonight - without booze and tomorrow will be raring to sand down and repaint the stove - it's looking  a bit shabby and as the forecast is for another mild night, I'll let the fire go out (setting the heating to come on just in case) and then rub it down and paint it in the morning.

Meanwhile - AS we're not in a TV signal spot, it's going to be a netflix night on the goggle box.