Leeds to Huddersfield before the Storm hits...and ANOTHER stoppage!

I really am being rubbish a blogging updates at the moment... sorry.

It'd been nice spending a bit of time in Leeds - it gave us chance to do touching up chores, visit friends and (as a result of finding a power bollard "on") wash and tumble dry a couple of loads on shore-power AND get the batteries sully charged - albeit briefly. 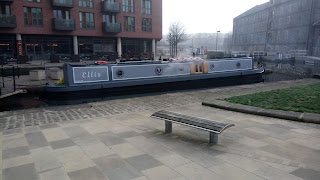 Whilst here, Andy's also MADE me have a clear out of "thin clothes" - apparently I agreed last year to go through my clothes in early March after my few months of dieting and get rid of everything that didn't fit me... and by that, I mean COMFORTABLY.... I can still "fit" in everything... it's just I look like a jelly baby in lycra on occasion - :-(

He does have a point about me hoarding stuff though... take these - my Favorite strides... I'm almost ashamed I bought them for 120 quid from a ponsy designer shop ... ahem, 26 years ago and have only worn them once or twice.... I liked them but for some reason, no one else did! 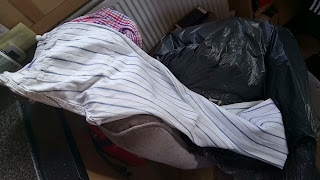 ANYWAY - 3 bin liners later we've a bit more space and need to find a charity shop that is stupid enough  on the cutting edge of retro fashion to take them!

TALK about spring like weather though - whilst in Leeds we've seen temperatures up to 17 degrees... colder during the night with sharp frosts a couple of days but by 11am, folk are scurrying around in shorts and t-shirts... I've never REALLY come out of my shorts since last summer anyway... perhaps the occasional day when I was doing jobs outside that meant I'd be standing around rather than moving.  Warm days has meant I've let the fire go out most nights - only lighting it late afternoon when the sun begins to go down... I don't trust this early spring.... there's still 2 foot of snow to come you mark my words!

We left Leeds on Monday morning after a lovely weekend watching folks drinking and socializing in the sun.  At one point a rather precocious couple of young men came to chat to me (sitting reading out the back) whilst Andy was cooking our tea - Young people are far more forward than we were and without going into their conversations, I have to admit to being both a little shocked by their candor AND also in admiration of their confidence....

Where was I ? - leaving Leeds... yes, Monday morning we set off and went down stream... we had to wait a couple of hours for the fog to lift but once it had, it was another lovely day ... the sort where you put on ALL your clothing to begin with and by 2pm are chugging in just your pants and socks.

Stopping off at Woodlesford to overnight, we also agreed to clean the rear lockers, do a bit more painting and chuck some 'stuff' away. 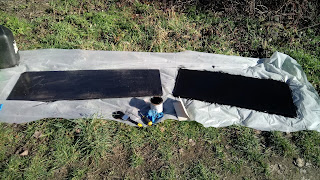 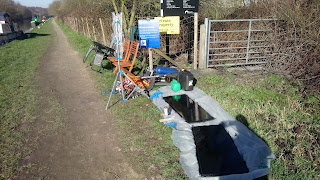 I've used garage door paint (Hammerite) again on the locker seats which is ok - it's not the toughest but rather than buy new  stuff for the sake of it, I'll just keep doing it until my tin runs out.

After a couple of nights in Woodlesford, we set off again in the early morning mist...  it was a lovely start to the day - if a little cold. 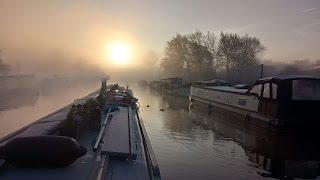 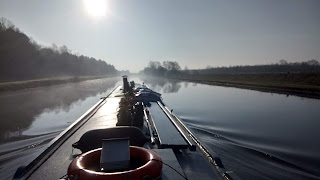 Given we'd had an early start and made good progress, we though we'd chug on as far as the Navigation at Broad cut ... stopping off in town to top up the diesel at Fall Ing moorings (the BP station on that corner has red for 83p a litre and is close enough to the canal to "wheel" 20 litre containers with ease)...

WHEN we got up to Thorne lock, Andy was struggling with a ground paddle - there are 2 and 1 gate one... trouble is, because the ground paddle at the TOP side of the lock leaks badly (and has done for 3 years that I know of) you HAVE to use all the paddles to stand a chance of balancing the lock to open the gates - with 1 paddle out of action there is a snowballs chance in hell.

ANYWAY - Ginger back up was called so I tied the boat up and went to help...  EVENTUALLY after about half an hours buggering about, I manged to get the windy bit that was "broken" to engage with the cog and bring up the broken ground paddle...  even then it was still a nightmare to move and I've damaged my back as a result.

Later on, I noticed a "stoppage" notice in my inbox saying said lock was closed  - awaiting divers.... 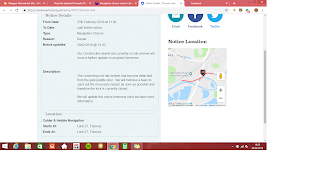 Given this had  been posted AFTER we'd set off for the day anyway, I was quite pleased we'd gotten through it - otherwise, we'd have been "STUCK again"

As we pushed on upstream/canal, we encountered a group of walking ladies who I had to rope into help with "Figure of 3" locks too as they were harder than normal..... BREAKING my hand-spike for the second time in as many weeks - said hand spike has now been burned and replaced by a lump of scaffold pole found laying around. 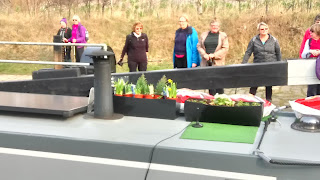 Before we could leave the river at Shepley Bridge, we had to wait for a working boat and hopper to descend...  Andy did well to avoid it on approach - me being sent to use the "hand spike" - you may recall since he got whacked in the face with one last year, ALL locks with hand spikes on the Calder and Hebble Navigation have become my sole responsibility... grrrr. 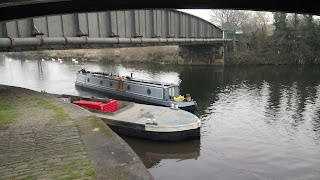 Next stop was Mifrfield - no one else around on the visitor moorings so we were able to tie up right outside Lidl which was handy so stocking up on heavy stuff.

We had planned to spend a week or so in Mirfield but on looking at the weather forecast, apparently storm 'Freya' was on her way ... with that in mind (and only a few miles of river sections left between us and the (relative) safety of the Huddersfield Broad Canal) we decided to head up to Huddersfield early...

BEFORE we could leave , there was just one job still required... taking the 4 bags (3 of mine) to the charity shops in Mirfield... 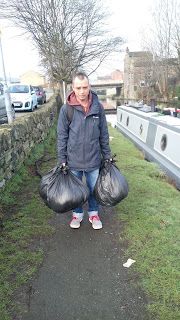 He was actually rather pleased to be chucking my stuff out  recycling things... he just forgot to tell his face ;-)

A quick hope on and off the river through Batteford lock (passed South Pennine Boat Club) later and we 'd arrived at Cooper Bridge.... Chucking a VERY sharp left (in one maneuver this time - I must be getting better) we left the River for the final time for a few months and began our ascent of the Huddersfield Broad Canal. 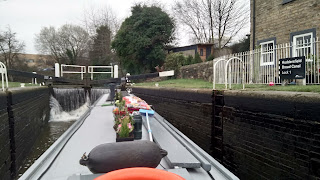 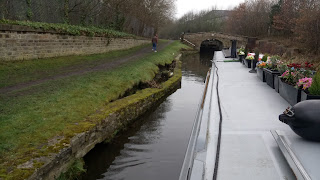 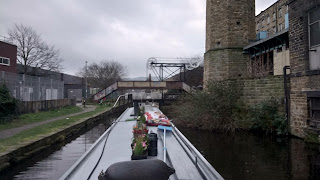 Plenty of water coming down but to be honest, whilst the bottom section is nice enough, it soon becomes a grotty, litter strewn canal to a dirty town...  Such a shame as Huddersfield has some lovely old buildings but SUCH a litter problem it's a disgrace.

The town itself though does have an array of useful shops and services so it's here we'll stay to sit out the Storm - currently tagged on the end of the permanent moorings behind Sainsburys ... where we've once again managed to get plugged into shore-line... at a bollard with 6 quid credit on!  We need to call in to see the "harbour master" tomorrow (Monday) morning to pay the 8 quid a night to "be here"which does feel a bit of a con but we're only gonna sit out the worst of the storm before we begin our trip up the Narrowcanal towards Slaithwaite - (pronounced Slowit) ...