Standedge Tunnel to Upper mill on the Huddersfield Narrow Canal...

If you've been following this rubbish I write, you'll know that Standedge Tunnel has been hanging over me for weeks. In a way it's been a positive thing as stressing about that coming up, has forced my brain not to obsess with Joyce's death.  The grieving process continues (strangely) and whilst it's now a little over 2 months since she died, something happens or a thought creeps in and I 'm back in the moment and a gibbering wreck.  Apparently, you need to get past a year of anniversaries before things 'feel'better.... right now that seems a long way ahead and I can't find the fast forward button.

Whilst on the subject of mother's death, I have to say, I WISH pubs,TV and shops would not go all out for the upcoming mothers day ... selfish of me I know but it just feels like they're rubbing salt into my open wounds right now ... commercial self interest on their part being the driving factor NOT the "nice Mothering Sunday" we learned about in primary school - where you spent hours MAKING something for your mum (that she invariably hated but loved the effort) ....instead these days it's all about "the perfect bought gift"... Still, looking on the black side, I suppose I can offset the cost of the freesias I've sent for the past umpteen years against the car hire and speeding fine for the funeral... the speeding fine which finally came through after I declined the 'speed awareness' course... oh I forgot to add - when you speed in a hire car, you ALSO get shafted by the hire -company who charged me another 40 quid to "pass on the letter" - b**tards.

ANYWAY - let's put all that behind us for a while - at least until the next time I'm feeling sorry for myself at least!

Gosh I'm waffling today - sorry...SO, Sunday afternoon we were still moored above lock 42E waiting for after 5 (when the trip boat stops running) to go up to the tunnel entrance... when bugger me, we noticed we were listing... - another boat (that we'd passed moored further down the lock flight) was on it's way up to the tunnel... I'm not good at 'breaking rules' so we waited to the allotted time - my thinking being that I really didn't want to have to reverse back out round the right corner instructed by crt to do so.

AT the correct time, we chugged round and tied up for the night outside the cafe (which btw is currently closed for a refurb) .  It's not a very quiet place to moor - what with the train line being SO close AND the water gushing down the Colne over the railway - suffice to say when morning came, we awoke bleary-eyed and a little fractious - MORNING which btw was bloody chilly as we'd needed to let the fire go out overnight ) - Daft ginger here, didn't think to alter the heating timer to come on earlier so as a result, 7 am yesterday morning saw us up and about on a cold (but getting warmer) boat. 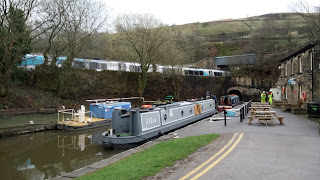 In true 'Ellis luck' it shortly transpired that the chaperone who was due to come through with us had phoned in to say he couldn't make it due to an injury.  This meant we had to wait for the first chap to fully transit and then get a lift back over the hill to go through again with us.

We left the heating on, topped up the water tank and then retreated back indoors to watch an episode of Benidorm on Netflix...

At about 11, Trevor returned from his passage - along with a trainee volunteer ...who would be coming through with us if that was OK.  No problem - everyone has to learn somehow...  although in hindsight, it would have been easier for me at the helm, had there just have been the 1 fellow there...no matter - they were both lovely chaps and their presence served to distract me from my claustrophobia 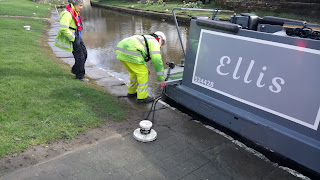 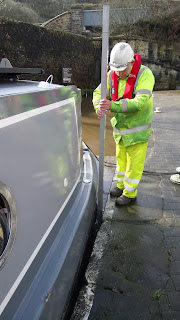 BEFORE we could commence our journey into hell transit, they needed to take 'Ellis's' vital statistics.

It turned out we were 6ft 6 wide, 6ft 2 tall (to the top of the solar panel brackets in the middle) - our official draft is 24 inches but they measured 26 (I had 29 to the bottom of the skeg when I did it) and ...actually I've forgotten the width at the top of the boat - I DO remember it being a few inches short of the max allowed dimensions so that was lucky...  a few inches that BOY did we need!!!

NOTE TO SELF - to achieve the 6ft 2 at the front, we need to have: a full water tank... a 3/4 full 'black-water tank' 100kg of coal in the well deck, lots of wine under the bed, and ALL the planters off the roof rammed in the bow - that'll be fun to replicate in August!

Having ticked all the boxes, off we went.  Me at the helm and Andy bobbing up  through the hatch as there wasn't space due to the trainee chaperone.

As has been said by others, there is NO WAY the helmsman can actually take photos during the journey - you have to concentrate on the pointy end SO much, it makes you need a wee.

Andy picked up my phone periodically and snapped a few but my phone doesn't respond well to his touch - ergo, whilst I have a few photos, the're not brilliant... 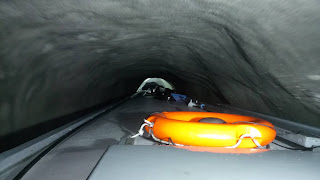 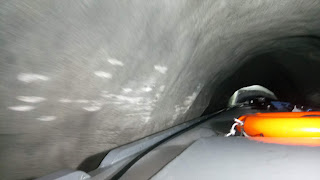 The inside of the tunnel varies between hard "blasted rock", concrete screeds and bricked sections - not forgetting at the end there is a "flat bit" where the tunnel was extended recently... 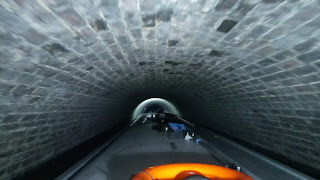 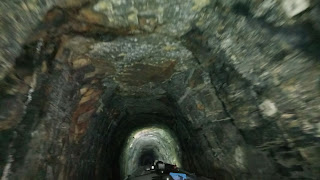 EVEN for someone like me - a "Vanilla Viking (that's the new term for fire-engine blonde btw) it's actually very interesting... AND beautiful.   The trouble is though, there are so many twists and turns and jagged sticky out bits, that you can't fully appreciate it  - you CAN appreciate how difficult it must have been to build back in the day.

There are 4 stopping points where the chaperone has to get off and "phone tunnel control" to confirm our position and request permission to continue - in our case, this permission was always granted as there were no boats ahead of us - Unfortunately, the final one of these stopping points had GUSHES of water coming down - and by that I mean literally a waterfall. Prior to this we'd already been SOAKED by a few of the ventilation shafts - to the point that water had actually made it's way into my muck boots (remember them? - my posh wellies).

Trevor (the most knowledgeable chap you could ever wish to meet in regards the tunnel - he's written a book I think) said it was the wettest he'd EVER seen it . To be expected I suppose given the weather this last week... we REALLY did get soaked!

As we approached the exit - some 1 hour and 50 minutes after entering, I'm pleased to report not a single scratch to the paintwork - at times we "scraped" below the water line as bits stick out under water that you just can't navigate around... and you don't even know they are there until you feel the scrape - luckily that's what rubbing strakes are for.  THE front corners, AMAZINGLY remained un-damaged ... perhaps because I went so slow - lots of folk only take 1 and a half hours so we were a good 20 mins slower... partly due to comms issues at the edits I suppose but mainly due to me being uber careful.

Tom (http://www.narrowboat-waiouru.co.uk/2016/05/an-interesting-experience.html) of NB Waiouru fame, suggested we protect the corners...  something we might have done if we'd had anything on board to do it with...  thankfully, my snails pace   superb skippering, meant it wasn't required...

My FAVORITE views of the journey remain these though: 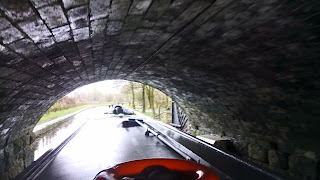 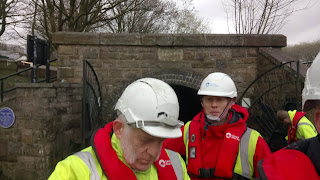 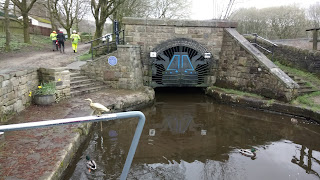 The relief felt by that time was palpable... although I have to admit, to not being scared... fear of it being worse than the event itself - AND now at least, I know I can do it SHOULD mean I'll not dread it so much when we come back through towards the end of August.

Once through, I got the fire going and we chugged on in the drizzle to end our day in Uppermill . 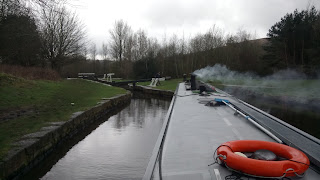 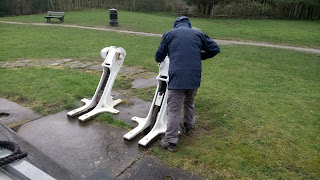 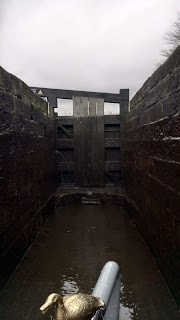 The depth of the water in the centre of the tunnel btw, being about 8 foot - as you can see from the top gate . 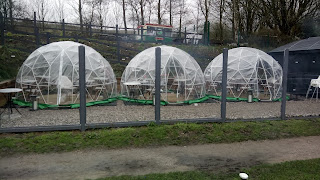 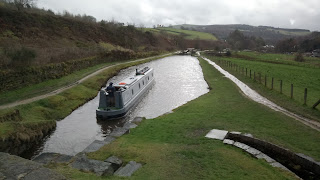 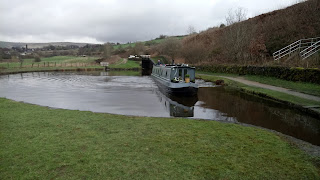 We'd swapped places by now as Andy was on the phone to his dad - working lock paddles/gates and chatting on the phone isn't a good combination.

Before we stopped for the day, we needed to get a pumpout done  and the services here are a little difficult to get to - mainly because of a tree stump that jumps out and gets you just as you pull in. 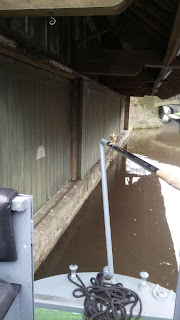 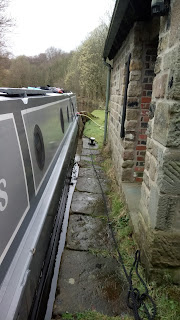 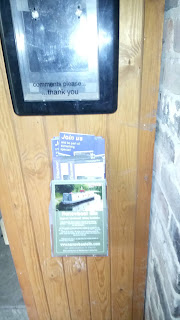 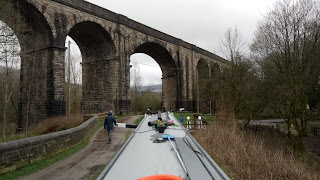 The pumpout machine here being a bit tight - only giving 6 mins worth of pumping and automatically "un pauses" itself before you have time to rinse the tank out...Whilst I was pumping out, Andy took the opportunity to bung some of our flyers in the block.

Once tied up at Uppermill, we showered and went out for a celebratory tea in the "Wagon Inn" - I had beef cheek and Andy had a "trio of sliders" ... nice enough but over priced for the quantity AND at £6.80 for ONE glass of wine, we soon retreated to the Coop for dessert back on the boat.

It COULD have been a nice relaxing evening, were it not for the moron inconsiderate boater moored opposite us running his generator from 5pm (when we arrived ) until AFTER 1am... ffs...  2nd NOTE TO SELF... NEVER, EVER, EVER, assume other people will play by the rules... next time we encounter a genny, we'll pull the boat back or forward BEFORE retiring.... grrr

I'd forgotten about that damned tree stump. Well done on no damage during the transit. It's an experience I'd only do once!

Greta journey through the tunnel. Would love to do that one day.

With you on the Mother’s Day thing. It’s almost three years since my mother died, and it still gets me.

Nice 1 Mark,
Seems a great thing to do in a narrowboat, hats off to the volunteers who got it restored .
Glad you enjoyed it, 1 Hr 50 hours concentration takes some commitment to the task.
Grand photo's from Andy.....
Enjoyed the read.
Ade
Nice link to Toms blog enjoyed gandering at that again.