Spending a week in Huddersfield....

Well then - it's nearly a week since we arrived here.  As towns go, it's not bad.  It really does have some beautiful old buildings - most of which are now being used far more diversely than they were originally intended.  Within a few hundred feet of the canal you come across lovely architecture - the key is to "look up" - the skyline is where the gems can be found. 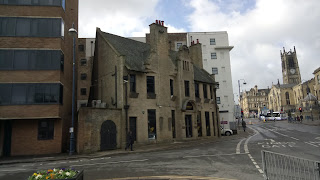 It's a shame some of the 60s-70s monstrosities got built so close but I suppose time marches on...

No matter, there really are hundreds of lovely buildings to see if you have time/inclination.

US? - well, having "just nipped out to get" this and that  from various shops, we've also utilised the occasional break in the windy,wet weather to do boat titivating chores - In Andy's case this has involved buying yet more plants to bulk out the spring planters on the roof etc. 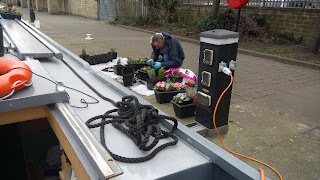 Whilst he's been doing that, I've been replacing the old Omni-directional TV Ariel that we've spent the last 2 years convincing ourselves worked OK , When in reality, it's been generally rubbish.  Much of the time we've unplugged it and used the mag mount on the lounge telly which can generally get a signal when the omni couldn't.  Huddersfield however, beat even that one - ergo, I bit the bullet and bought a mini "proper one" from Screwfix. 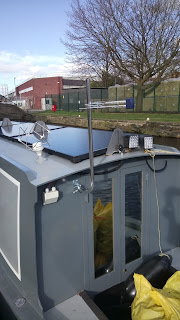 For such a tiny thing, it picks up 88 channels (whatever they are) compared to just 14 the omni could manage...

OK - most ot the stuff broadcast is rubbish anyway but's nice to be able to watch the occasional decent program on the beeb... tbh, these days most of our viewing is on Netflix anyway.  Fitting the bracket involved buying a new tap and dye set.  3 of the holes tapped nicely but the final one... perhaps as  result of the tap wearing out doing the prior ones, ended up "snapped" in the hole... try as I might I couldn't get it out either by drilling or using the screw removal tool - IN the end, I bashed it in with a hammer, cut a head off a bolt and glued it on to give the impression that 4 bolts are holding it on rather than the actual 3 that worked... it's sturdy enough so I'm not overly worried about it.

It's done now  - and it's got quick release wing nuts on the mounts so it can come down when we're on the move... especially useful given the low bridges that we're going to encounter next week when we head up the Huddersfield Narrow Canal.

Spending the week moored just down from Sainburys (and paying the 8 quid a day for the pleasure) has meant we've been able to make good use of shore-line again... it makes such a difference when the sun is missing - being able to use as much power as we like without running the engine for hours on end.  Its a bit annoying that the immersion heater has blown on the calorifier  - sods law that and it's meant we've had to use the webasto central heating (and burn diesel) to get hot water - no matter... I'll sort out a replacement one when I get around to it - it's gonna be a long while until we're hooked up again anyway so there's no immediate urgency to replace it.

The down side about being "down here" though is that the water point is about 500 yards away - 500 yards of boats moored on either side.... RATHER than chug down and then have to reverse back (there's no where to turn THIS end if we turn in the basin)  I borrowed a trolley from Sainsbury's and made MULTIPLE trips to and from the water point with our 3, 10 litre containers to top up the tank. 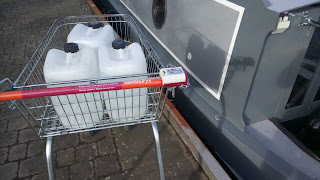 I have to admit to feeling a bit "clampetty" doing it but 10 "runs" later, the tank was full again and laundry could commence - we've washed and tumbled dried just about everything on the boat that would fit in the washer!

I got chatting with a boater earlier and she commented we seemed to use a lot of water lol.

THIS morning, we took the boat back to the water point AND also to fill up with diesel - the marina only opening Mon/Wed and Friday from 10am during the winter months... Given our plan is to depart early Monday morning on the run towards Slaithwaite, I figured it better to get diesel today and just top the water tank up on Monday as we pass the tap.

That in itself was a bit of a faff though as it involved turning in the basin to back up to the diesel pump, THEN turning again to reverse back to our nominated bollard near the locomotive bridge - 500 yards in the wind reversing a "right propped" boat was not the most enjoyable of experiences this morning but we made it without touching any boats - admittedly, Andy had to push off on a couple of occasions from the bow to prevent Ellis 'kissing' any of the moored boats.

No matter, we're back now and plugged back in to the national grid for the final couple of days of our  stay.

Once again, the weather forecast for the next few days is a bit grim - We've made the decision to begin our ascent of the Narrow Canal on Monday as presently, it looks the best of a bad lot as far as weather is concerned... no doubt it will change again and end up JUST as bad as the rest of the days ahead lol. We'll just have to man up, put on extra waterproof layers and take it steady... so long as the canal doesn't freeze over, we'll be ok.