A Few days in Aston Marina...

Righty ho - we've been offline (as in the cut) for a few days now... comfortably ensconced in Aston Marina (Stone)... it's nice.

Thursday morning, we chugged in about 10 and after a quick pump out and top up with diesel - which btw was very reasonably priced at 73p a litre,  we were allocated a temporary pontoon to moor on for the 3 days we'd agreed on.  It's worked out at 12 quid a day but at least we have a tap and shoreline to the boat.

There's a one way system in the marina and we've been amazed (considering it's still 'off season') how many boats move around in here...  it IS a bit of a wind hole by all accounts, but when we came in it was perfectly still. 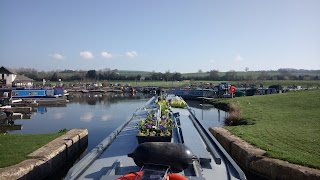 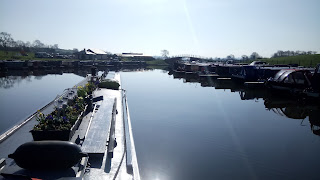 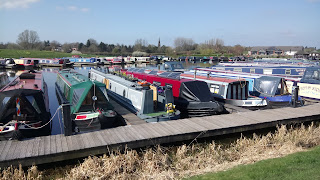 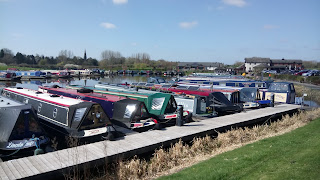 We really couldn't have had (good English not) nicer weather to be here... it gave the place a really welcoming feel....AS did Sandra (the new girl) and Nick the manager here... both TRULY the right people for the job.

Whilst here, I've done various maintenance jobs such as finishing off darning the fly nets on the portholes... you remember, the ones I holed with a tree back in Leeds on route to my mum's funeral.  Writing of mum, today is 'Mothering Sunday' and after weeks of being constantly reminded by media, shops and pubs, the world can go back to normal... it's been horrible and I won't lie - today I do feel especially sad about it.  Even my brother who's not very emotional commented it felt odd to him too ... I'm interpreting "odd" meaning that he's sad too. It does feel weird not to have bought a card & flowers and it feels even odder, knowing that I'm not going to phone her today.

So, as I was waffling on about, AFTER I finished darning the nets (not very well but at least they are fly-proof again) I got out the "newly mixed" paint to touch up here and there...  it's not the same colour exactly but it'll do and the bits I've done (the darker grey) DO look better than before at least.

I've also had to "repair" the NEW TV Ariel as it somehow got broken at the bit the "F" connector, connects to - the soldering inside totally snapped off.  I suppose they are not really designed to be taken up and down every day... anyway - having thought logically about it, rather than faffing TRYING to solder the female socket back on, (which would be a right old faff for my fat fingers) I decided to REMOVE the point of weakness altogether - to achieve this I had to flatten the coax cable enough to push it inside the antenna (under the prongs) to get it out the other end - where, I then crimped a couple of connectors onto it and  screwed it to the same place the original bit had been...  Job's a good un and now when I erect/dismantle it when on the move, there is no strain on anything other than the cable. RESULT! 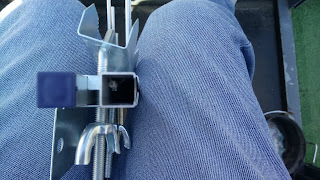 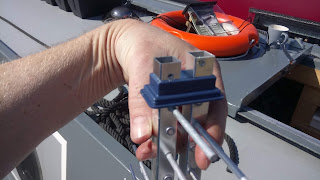 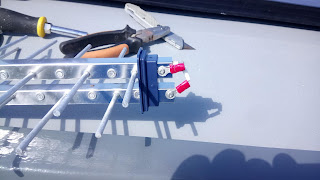 Once that was done, I moved my attention to the Engine bay and decided that although 20 hours early, I'd change both of the diesel filters, the engine and gear box oils and oil filter.    Bit of a school boy error though as I didn't run the engine long enough to warm the oil so "pumping it out" was a slow process...only managing about a table spoon per pump... ergo, 8 litres took a long time to remove - of course, I only discovered it was taking ages when I'd gone PAST the point of being able to run the engine to warm it up a bit more (well without pouring what I'd just pumped out back in again if you follow).  No matter, it got done... AS did the gearbox but BOY oh BOY WHY is the drain plug on the PRM 150 SO blooming hard to reach?... even with my "new big spanner" it's an absolute git to remove/refit as there's no where to stand that doesn't risk breaking something! 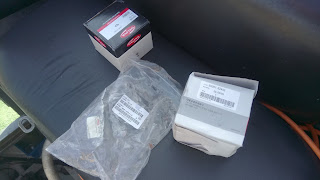 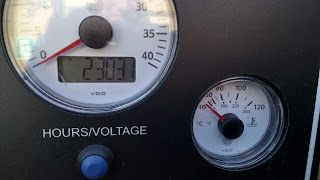 Whilst in the engine hole, I checked the belts, and torqued the engine mounts AND filled the stern greaser... I even tightened up the locking nuts by half a turn (having discovered with my micrometer one side had a 1 mm bigger gap than the other)...  Hopefully that'll mean less drips and less wasted grease.

I also had a bit of luck in the Marina office as they had a compatible fuel filter at just over 12 quid... the ones I've been buying (made by Daedong) are now 26 quid each...  it's good to have a couple in stock.  I am down to my last oil filter now though so I'm gonna have to order a few from Calcutt boats... well unless I manage to find some on our travels... compatible ones thus far have been impossible to source.  The Daegong ones are not too dear though at about 9 quid a pop so I can live with using original parts if necessary.

Whilst we've been here, we've reunited with our friends Eddie & Wendy (who over wintered here) and Since Joyce died, I've been very lucky to have Wendy "online" to natter with about stuff ... she's been very kind to me and has taken some of the strain off Andy ... it's not easy for folk living with a partner on an emotional roller coaster... espeically when they've no real understanding of how it feels - with Wendy, (having gone through it) she knows how to respond... well for the most part at any rate.  We went out for a meal with them to a Chinese in Stafford  the other evening- I forget it's name but it was really nice.  I think they are going for lunch there today when their kids come to visit for 'mother's day'...

WE on the other hand are planning on leaving this morning - we've lost that hour in bed but the sun is shining so when the marina office opens at 10, I'll nip in, hand back our fob (to get the tenner refund)  and we'll be off.

We're heading BACK up through Stone and intend on a little jaunt up the Caldon Canal - apparently going up there and the Leek branch qualify for a couple of 'silver plaque' thingys... we don't go in for all that... we just want to take some photos, and colour in the map.  Easily pleased - that's us.

If your filters can wait until you get to Marple there is a great motor spares shop called Harrods just down the road from the canal. He knows all about boats and can source any filters. belts etc. that you need. Cheaper than a chandlers too.
Mick
NB Oleanna

Also, if you need gas there is a Calor distributor through a gate in the towpath fence just north of Etruia junction on the T&M. In 2017 a 13kg bottle was £21, way below normal prices.
Mick

Cheers Mick - I'll definitely check out Harrods when we get there ... I've still got one in stock and dont need it for another 200 hours so plenty of time.

Also worth a look https://www.inlinefilters.co.uk/

Hi, we spoke about composting loos at Aston this morning. Would you like me to email you the details of the Airhead we have fitted on nb Cleddau.
Regards,
Ken

Cheers Ken - that'd be great... we're thinking about trying composting for the crew loo first and if that works ok, bite the bullet and do the main one too.

It really IS a nice Marina... not one person I spoke with had a bad thing to say about the place/management either which makes a refreshing change. We're coming back for winter - assuming crt stoppage program for this year doesn't prevent us getting from Skipton (mid Nov) to here.

Qaysider,
We are hoping to get back to our mooring on the Macclesfield sometime in September/October.
Details of the Airhead composting loo :
https://www.waterlesstoilets.co.uk/airhead
We have 2 liquid containers - essential
and 2 solid containers - not essential but 8 years ago we we were very unsure of composting.
The US web site is:
https://airheadtoilet.com/
and may have more information
Regards,
Ken