On Route to Leek up the Caldon and New Wellies?

We left the Marina on Sunday morning - as expected, the wind had increased a fair bit and tbh, I did have second thoughts about handing our fob back and staying another night... maneuvering in front of a load of other more experienced (well some of them) boaters in the wind is never pleasurable prospect.

No matter - we pulled ropes and set off with a bit if wheel spin ... can't think of the boating equivalent term for that one!

Blooming heck... as soon as we left the protection of the boats either side the wind picked us up - all 16 tonnes of us, and tried it's best to side slam us into the boats moored on the opposite side of the marina...  MORE power was needed than I'd liked (I hate thrashing about) but it did the trick and brought us perpendicular to them without any collisions...  an added pain in the bum  complication was a boat on the pumpout point under the bridge which we had to navigate past at quite a speed to avoid losing control in the wind... luckily, I'd been chatting with the owner earlier and he was quite laid back about it... A boat following on behind didn't quite make it and ended up with it's nose dug in the side near the bridge...

Obviously there are no photos of this... the first time I was able to get my phone out was when we'd exited and were back on the canal - 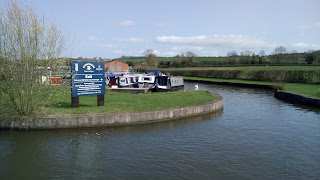 You'd never beleive from how calm the water looks here HOW much the wind was blowing... oh well...

WE chugged our way up through the bottom lock and tied up just near Marks & Spencers... well I say just near, about 300 yards back... we nipped in to get a  chicken as I fancied a Sunday dinner and then continued our journey up through the town/village. 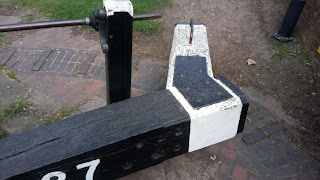 I quite like this cantilever lock (if that's the right name for it) balance beam..  it's just between 2 pubs which we resisted the urge to stop at - well other than to work the lock that is,

Further up, stopping at the Chandlers/boat yard place I spotted some high-healed leopard-skin effect wellies... luckily, they were shut so I couldn't buy them!

Rather odd for a boaty shop to be closed on a Sunday - most acknowledge the fact that a lot of boaters only HAVE weekends to go boating and close on a Monday instead...  oh well - their loss as I would have bought some other bits and bobs instead of the aforementioned wellies. 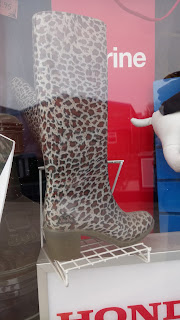 Chugging our way out of town we agreed trying out the marina HAD been a good decision and we feel comfortable to come back for winter as planned.

Approaching Barlseton, my previous favourite house has now been usurped by this one... 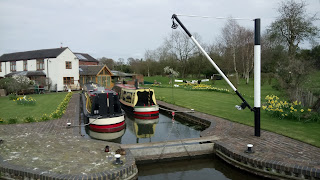 Talk about perfect...  parking space  Mooring space for 2 boats AND a lock in the garden...  lovely...

We stopped for a quick pint in the "Plume of Feathers" (by Neil Morrissey if it makes a difference) and then chugged on a mile or so to end our day near Wedgwood. 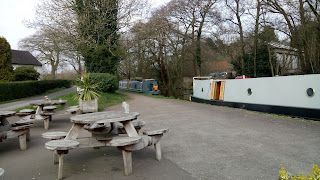 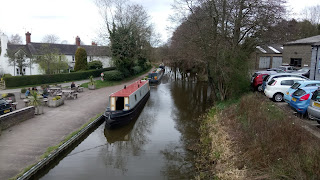 Yesterday morning we chugged along and remembered to stop at a bridge in Stoke where we'd spotted an abandoned/lost Sea Magnet on our way down last week... it's blooming strong - easily holding my weight without coming off - in the end it took a crow bar and a lot of swearing to remove it... AS usual, Andy took the photo credit but it WAS me that removed the thing..

ahem, it's now attached itself to the back of the boat and we can't shift it again! 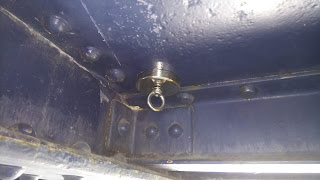 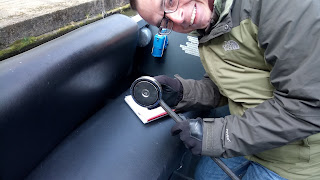 It wasn't long before we'd ascended Stoke locks and were back at Etruria Museum...  the "hairpin turn" onto the Caldon Canal went REALLY, REALLY well AND with spectators - whom I assume thought it would go wrong ... ner ner ner! 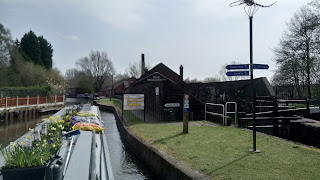 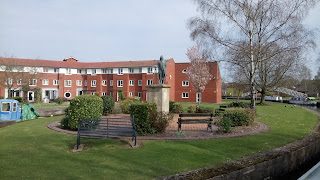 On approach to the first locks (Bedford Street Staircase) there was a boat already about to go up so we had to wait our turn... and another boat turned up behind  - a share boat I think, who'd just gotten over the stress of Harecastle Tunnel ... complete with a few scrapes here and there. 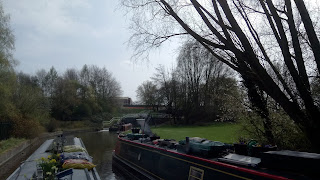 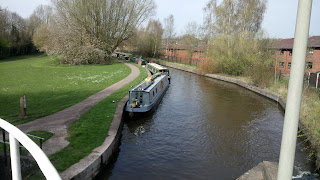 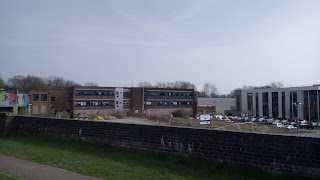 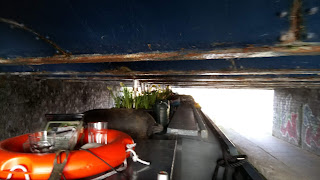 The first few miles of the Caldon to be frank are awful... much like the Ashton but with a scouse accent... we even came across couple of chaps wearing orange tops doing "community payback" - who were, actually perfectly pleasant and not at all threatening... everyone makes mistakes in life.

Still, eventually once you pass Hanley things begin to pick up and you stop regretting your decision to go exploring...

Bridge 9 was a bit low but having taken the chimney AND ariel down as a matter of course, it was fine.

The housing begins to improve and there it looks more welcoming once you get to this point... 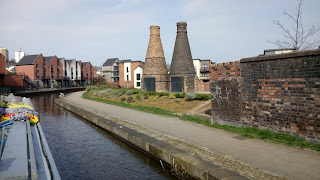 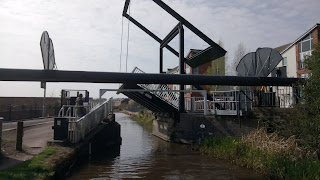 By now, we'd caught up with the boat that had gone up the locks ahead of us... a lovely young couple who were happy to go at tickover their entire journey - unfortunately for us, OUR tickover is faster than theirs so after a couple of hours of having to slip in and out of neutral AND having the other boat catch up with us, we were getting a bit frustrated.

Being British, we're not very good at offending people SO Andy hopped off approaching the next lock and prepare it for them...  to try and give them the hint we'd like to go on ahead...  they didn't take it lol.. SO , plan b was to try and get ahead at the next lift bridge - PLANNING on then going further ahead and through the next one before them.... The next one turned out to be one that is always "up" so we didn't need to do anything and as WE got to the locks first, we carried on at our pace... leaving them to theirs.  RESULT.

It's a shallow canal though and our bum was dragging along the bottom quite a lot of the time. 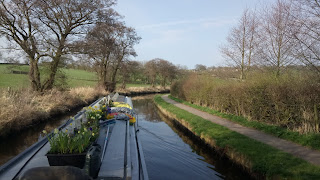 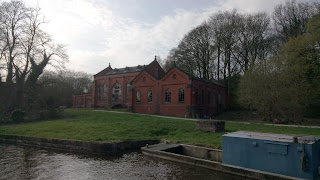 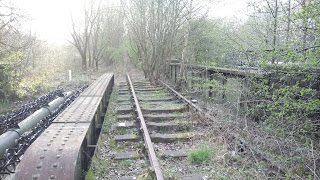 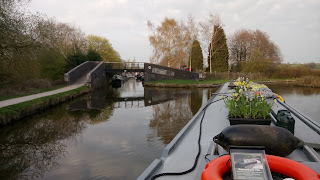 We ended our day just past the winding hole near Endon ... today our plan is to go up the Leek arm but we have to turn before the tunnel as we're too long... the weather is awful -rain forecast all day and it certainly hammered it down a lot during the night too. 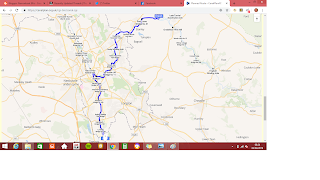 Going  to don the water-proofs shortly and pull up our coats!

You can go through Leek tunnel — although the winding hole at the end of the arm is small, there’s a full size one immediately past bridge 9.

Adam beat me to it! We winded Waiouru after Bridge 9 and reversed up towards the end. http://www.narrowboat-waiouru.co.uk/2013/07/leek.html

When you're on a shallow canal on a deep boat with a great lump of an 18hp engine in the middle of it, there's no going fast to be had I'm afraid. We were going as quickly as we were able. Always very happy to let nippy boats pass if they just ask or make it clear that they wish to. Keep blogging: an interesting read. Best wishes, the 'lovely young couple' :-)

lol - cheers... had it been "my towpath day" I'd have asked but Andy is a bit more reserved when it comes to appearing rude... More often than not, its US slowing folk down as we're also quite deep at the back and can rarely go as fast as everyone else.