Well the last couple of days have been an adventure...  talk about back of beyond - no TV signal, No 4 or even 3g internet access, no Radio... not even a constant phone signal (at least not on EE or Three)...

The result is mobile device's going flat really quickly as they TRY and seek out reception...  with no luck.

Having a spent a night at Postlane visitor moorings (it might not be called Post lane come to think of it) we would have left early HAD 2 Black Prince Hire boats NOT been moored on the water points... we wanted to fill up but 2 boats had turned up over night... it turned out, John Prescot (you remember him - Johnny Two Jags of M4 bus-lane fame) was on one of them...  I wasn't very well humored as I linked all our hoses together and struggled to reach back to the 'proper' moorings.  hey ho...  most folk were hirers once - generally hirers are fine and in fact, tend to have a lot more smiles than more experience boaters.

It was a blooming awful cold and windy day... the kind we're normally "sit out" but we have a schedule to keep to at the moment and want to be up in Marple with a couple of days grace before or first guests of the season join us.

I have no idea what happened to my photos but when i transferred them off my phone, I've nothing until we went through Leek tunnel - I'd gotten it into my head that there was no where wide enough for us to turn around but Adam (off Briar Rose) put me right...  There really wasn't a lot of water up there though and it was reminiscent of the Dewsbury arm of the Calder and Hebble "back home"...as the canal got more and more narrow and Ellis dragged it's bum along the bottom. 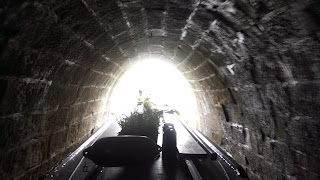 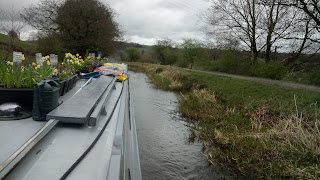 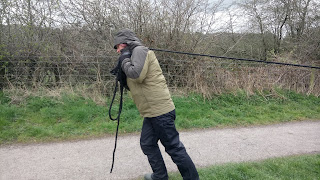 Having made it through the tunnel ok, we turned the boat (in the wind) and then man-handled it off the winding hole.  IT was there we bumped into Vagabond of Twitter... we'd seen them a few days previously coming into Stoke as we headed down to Stone. - they weren't home though.

The end of the arm isn't very spectacular... 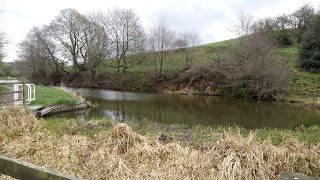 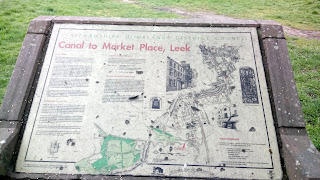 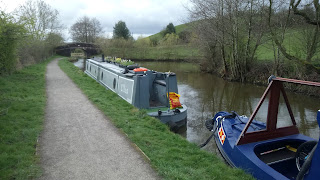 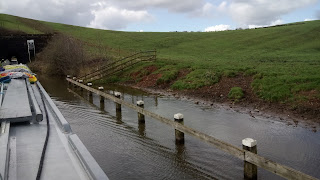 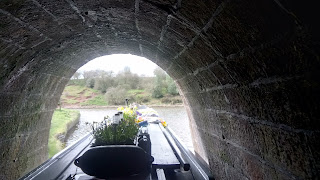 Neither of us could really be bothered with the walk into Leek so we hopped back on board, had a bowl of soup for lunch and then retraced our chugs...the sun was trying to come out and by the time we'd gotten back through the tunnel, the day had improved thankfully... but not for long. 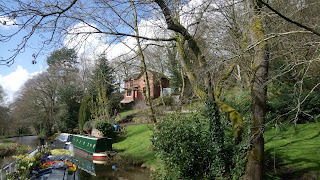 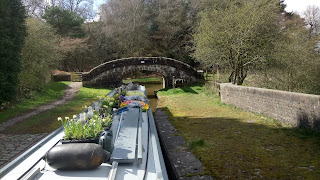 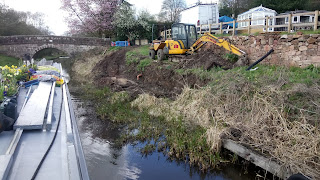 WE did experience quite a lot of dragging on the bottom - especially where some of the bank had fallen in and more often than not, scraped our way against underwater protrusions in bridge- holes.  Hard going a side, we WERE pleased to have taken the detour.

It wasn't long before we got back to the junction and this time we headed off down towards Froghall. 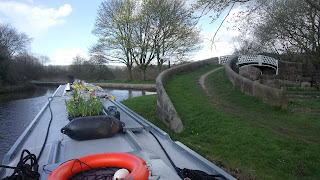 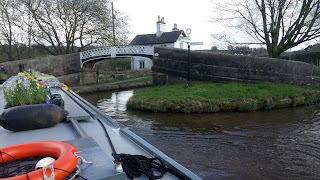 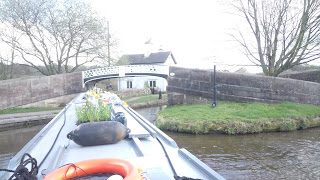 In typical boating style, WHEN no one is around to watch me, the hairpin turn went perfectly lol.  Hmmf. 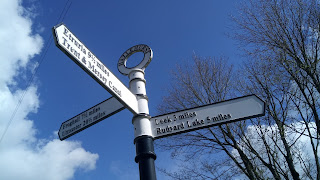 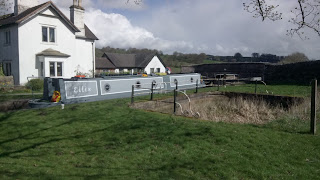 As we worked our way down the locks, before long we found our self going UNDER the aqueduct we'd just gone over...  (Hazlehurst) - and just around the corner we spotted a nice looking pub (The HollyBush) that we planned to stop at on our return. 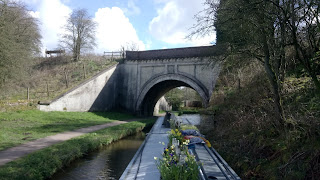 For a narrow canal without much water, crt certainly have left a lot of hoppers/working boaty things floating around... on several occasions we had to hop on and tie them up properly in order to be able to get by.  MORE often than not, they were right near REALLY shallow bit that we'd get stuck on. 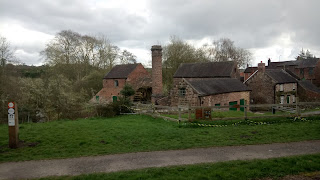 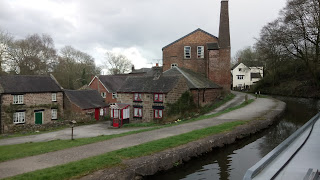 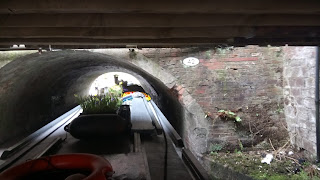 The "break" in the weather didn't last... and as we continued going down the locks towards the river section, it began snowing and hailing on us... 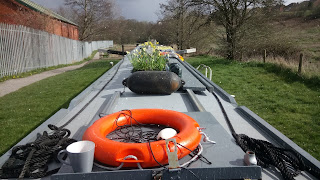 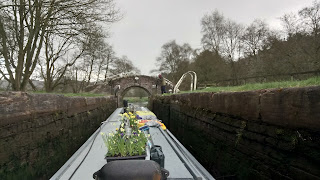 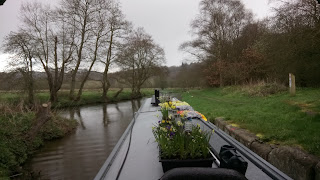 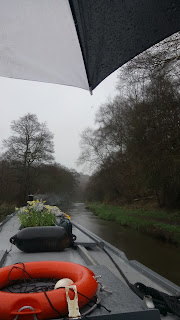 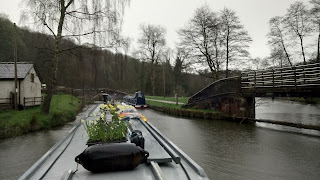 By the time we reached the Black Lion pub in the (now rain) we'd had enough - it was a shame there wasn't really enough room for us to moor up properly so we chugged on a little farther and bashed some pins in outside the pottery shop...  That would do us for the day and after showering, we walked back along to the pub in search of food - neither of us being in the mood to cook.. the weather had by now improved again but we stuck to our guns...I suppose technically we were "still" on the river section but with the weir, diverting it away, we figured it'd take  LOT rain to make it dangerous. 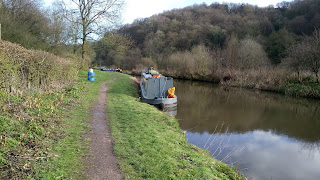 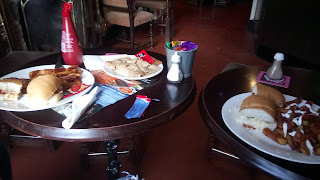 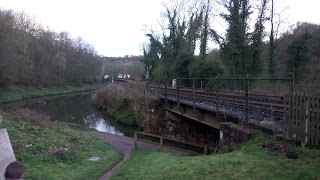 In true Ellis style, the pub WASN'T serving food that day... HOWEVER, the most hospitable bar-maid you could meet, said she'd happily rustle up some chips and oatmeal cakes with ham and cheese for us - MARVELOUS - AND cheap, 2 pints of San-Miguel , Sausage sandwich and oatcakes for about 13 quid! Alas, I didn't have any cash to tip with so as soon as we get to a post box, I'm gonna send a fiver and "thank you" note via the Royal Mail.

IT was strange being off line - when we got back to the boat dug out "Peaky Blinders" on DVD and had a reasonably early night.

Hi Both, everywhere looks better when the sun is shining so I'm glad you have 'enjoyed' your excursion despite the weather. Was it a joke about John Prescott being on a narrow boat? With 2 boats?? I suppose I shouldn't be that surprised as he was the National Seaman's Union man at one time, having done one trip to sea as a steward!! I can't believe that his missus Pauline was there too though as she is never seen without big hair and high heels! Enjoy the rest of your trip up the Caldon.
Tony and Helen.

Hi Tony - nope... it definitely WAS him and with 2 boats of folks...not sure if something was being filmed or not as some friends had to rescue them when they got the boat grounded not far from engine lock. No sign of anyone in high-heels though... that said, I was too busy being grumpy about the boats on the water point to pay much attention.

The boats are being filmed as part of a new series of Celebrity 5 go barging. Paula x