Dodged a bullet and a trip to Kidderminster...

What can I say? -we've just been busy boating with and without guests.

To bring things up to speed, the short version is we hung around between Autherly Junction and Brewood for a few days - nipping back and forth to go to the Coop for supplies.  On Monday we arrived near Napton boat hire and collected our guests who were supposed to be travelling a 4 day route around the less nice parts of Wolverhampton/Birmingham lines.  Wired had been crossed somewhere along the line and as THEY didn't really want to spend their first afternoon on a boat going up the Wolverhampon 21, we looked at the guides and decided we'd try a trip down to Stourport instead .. terminating their trip in Wombourne.

WHAT a result that turned out to be... it's proper lovely down here - although there is a distinct lack of water taps between Autherly and the other side of Wombourne. 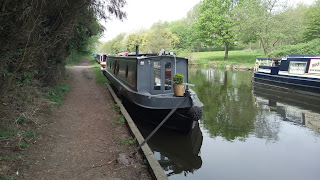 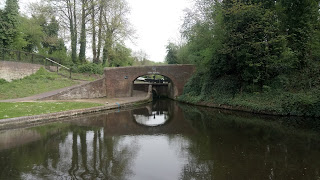 NOT making the turn up the locks, we all breathed a sigh of relief (not that we wouldn't have found it interesting) and chugged our way along in the sunshine enjoying a cuppa and a natter before the first lock 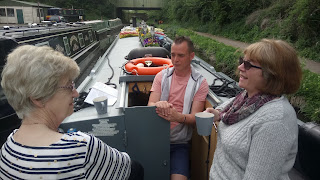 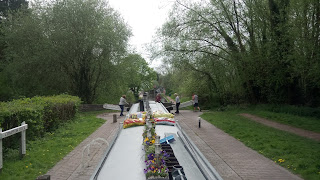 Upon arrival, Andy got straight into bossy  instructor mode and before long we were down and on our way once more.

We contemplated staying just above Bratch locks but as the sun was still shining (and the forecast for the rest of the week decidedly horrid) we continued. 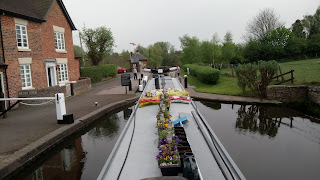 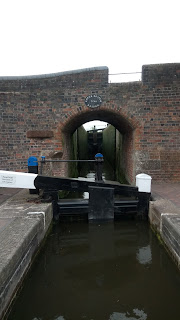 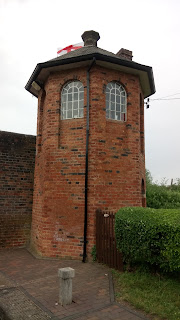 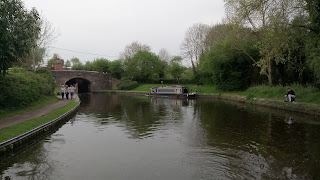 The Bratch is quite a clever little staircase - it uses side pounds between the locks involving a "mini lock" (not big enough to get the boat in) to facilitate this...  it works well.  It's also "manned" until 6 Monday to Friday and until 8 at weekends.

We stopped for the night at the Round Oak Pub in Wombourne.

Next morning the sky was beginning to look a bit threatening, but undeterred we chugged on .  There really are some lovely canal side gardens on this stretch - this one being owned by a garden cente owner so I Suppose it HAS to be good.... I'd imagine having a team of gardeners helps too ;-) 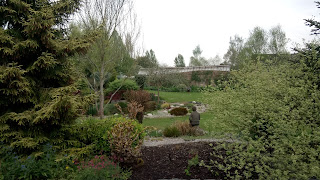 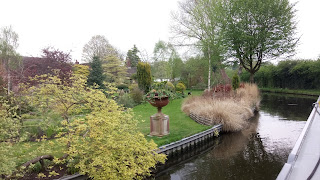 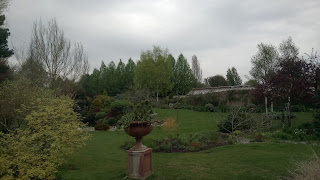 I got chatting with a CRT chap at one of the locks and he warned we'd need to get through Debdale lock before 3 in order to get past the land slippage at Wolverley...  the locks either side only being open between 9 and 3 - this wasn't going to happen so when the heavens opened near  Kinver we called it a day and 4 peoples' soaking wet clobber went through the dryer. 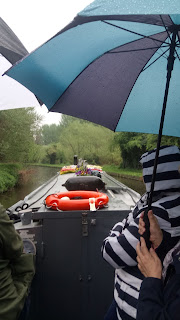 The plan to get to Stourport was looking un-achievable -not because of the distance involved but the opening hours of past the land slip.  Undeterred, we set off... I forget the name of this tunnel, but I don't think I'd like to live on one of the houses up above. 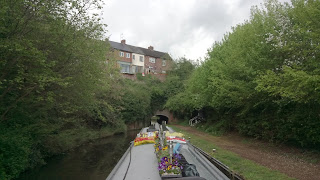 As I waited for the crew to assist a boat up Debdale Lock, when the boat came into view I thought to myself  ' I recognise that boat'...  but the crew less so.

Loosely tying up the boat, I wandered down to take a better look and it was Mike on Alchemy - he and his wife had stopped to say hello at Stanley Ferry the other year ...  it was lovely to shake his hand and KNOW when he asked "how are you doing?" that he really meant it... some people are just genuinely "good and sincere" !

As the crew buggered off on foot went on ahead, I chugged past the land slip and because I was busy taking photos, ended up briefly grounded on the towpath side just after - I hope you appreciate the photos as you missed OUT on the cursing!!! 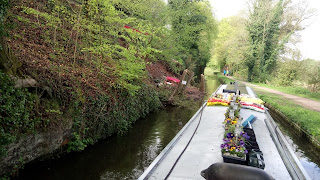 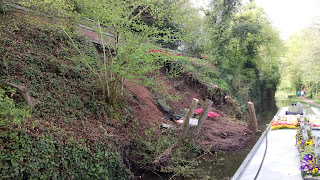 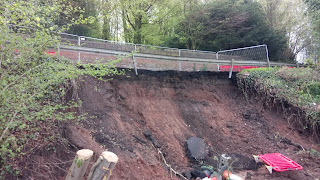 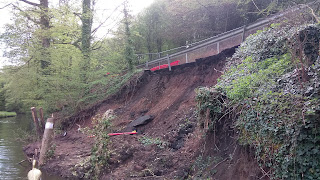 A nice surprise awaited Andy at the next lock - quite by chance, his parents were driving by, saw a boat in the lock and came to have a gongoozle.  After a quick hello, they toddled off and we continued on our way. 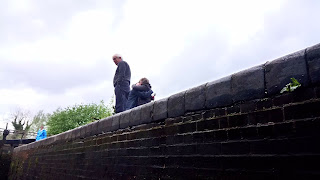 On reaching Kidderminster, we stopped near Sainsburys, had some lunch and then agreed there'd not be time to get to Stourport and back  - as such, we turned the boat at the (restricted) winding hole just on the corner before the locks... BOY it was tight... 1 inch spare at the rear, with the front fender pushed into the widest point on the offside. 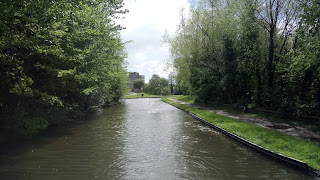 On our return journey, the skies were getting darker and darker and before long the heavens opened again big-style. 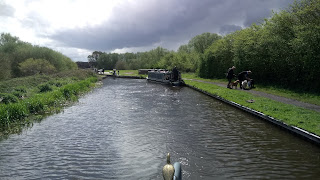 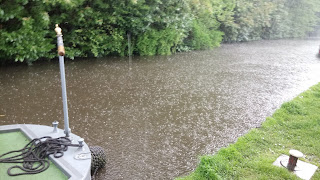 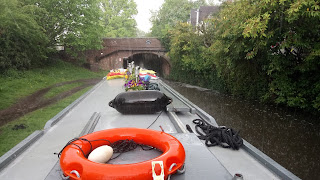 Back at Debdale lock, I took a look in the little cave thing... not sure why it's there, but it DID appear to be providing shelter to some poor soul. 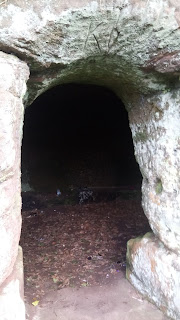 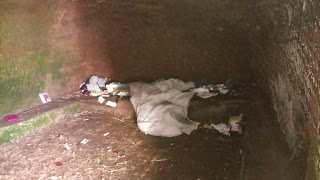 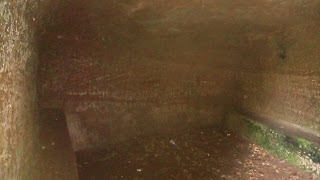 We arrived in the outskirts of Wombourne about 3pm after Stopping off for a final (pub) lunch together with our guests who were picked up by one of their daughters and we said out goodbyes.  We'd had a lovely time with them - mucking in, truly "getting" us and even the rummikub didn't seem as bad this time around ... perhaps I'm getting used to it now!

We're now going to spend a few days around the area so Andy's family can visit before we set off to Nantwich where we're due a week tomorrow to collect some friends and begin our trip up to Llangollen... quite excited about that journey as once again (just like everything since we left Huddersfield has been) it's new territory for us.

If we aren’t working, we would be happy to give you a hand down the Audlem flight. We are at OverWater marina just a mile after the locks.
Or if we are working we might be able to arrange to meet up for a drink at some point
Steve and Angela
NB Tumbleweed

we might hold you to that - the current plan (and they change by the hour) is to leave here on Tuesday early doors to make the best of the nice weather... Wednesday is looking a bit grim so we may batten down the hatches and stay wherever we ended up on Tuesday night!