Arrived in Marple - 6 months later than planned and a rough night...

Righty ho then - here we are, it's Tuesday morning and we've made it through the night...  not as windy a night as we HAVE experienced BUT as windy a (windyer?) night as I'd ever want under some creaking, ivy covered - half dead looking trees...

That's the trouble sometimes... you can't always easily avoid mooring under trees.  We try and avoid them as I have nightmares about trees crashing down, sinking the boat and killing us.  Perhaps a bit dramatic but it DOES happen... Even if the tree doesn't sink the boat, it can do serious damage to expensive things like solar panels and (ahem) plastic roof-top-planters...

Sunday morning we left Bosley and began our slow journey to Marple.  We came across a (hopefully) temporary repair to the canal bed/wall - we'd been told that during the dredging , holes had been discovered here and there... when we say discovered, I'm sure we're not hinting that they'd been CAUSED by the dredging... oh no... no us. 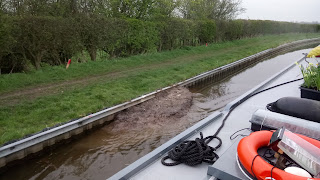 I'm quite sure this "plug of mud" will not still be there (like one we've passed for about 3 years on the L & L between Leeds and Rodley) when we come back down this way.

The bridges down this way mostly appear in quite good order though which makes a nice change from the ones up North - most of which appear to be on their last legs.. 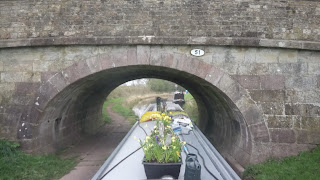 We also came across our first swing bridge in SO long, we'd almost forgotten what to do on them!

We'd half a mind to stop off and spend a night in Macclesfield but as we'd set off in good time, when we got there, moorings were scarce so chugged on through... passing the old Hovis Mill and even spotting a rather nicely decorated boat - initially, I thought it might have been a "wrap" but on closer inspection it did appear to be painted properly... although it was flaking off here and there...obviously someone's former labour of love. 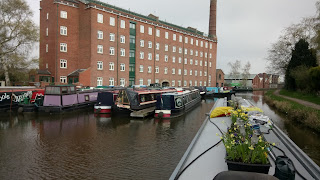 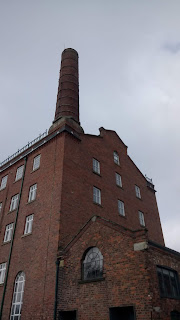 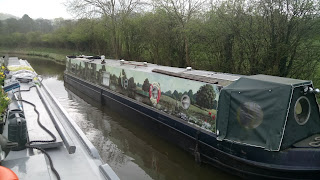 Approaching Bollington, we came across (the first group of many) canoeists - WE are good at 'sharing the space' but then a  couple of the chaps got our backs up, when they INSTRUCTED us to stop and wait whilst 40 more came on by... the wind was blowing a bit and "stopping easily" wasn't really an option so we slowed as much as possible ( to keep control) and continued on our way...  politely smiling at even the more vocal canoeists...  grrrr..

For clarity - despite our (and the winds) best efforts we didn't manage to hit we avoided any contact whatsoever with them... 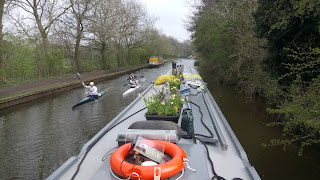 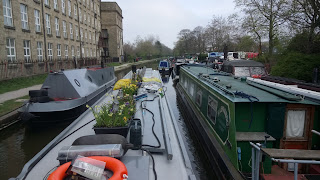 WE stopped briefly in Bollington to "nip" to the Coop - well I say "nip" it was a bloody long walk down some bloody steep steps... and THEN back up again with our shopping.... 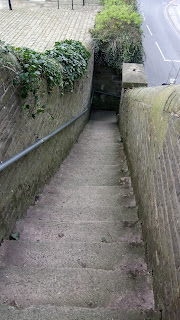 On route back, we detoured (yes WITH the shopping) along the old railway line (I think) and came across the "Bollington Labyrinth - apparently walking among (amongst?) the stones, can fill people with a sense of calm... OR dog muck on their wellies... OR perhaps both! 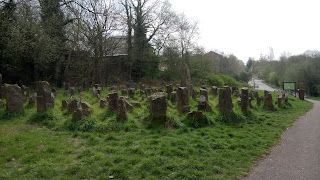 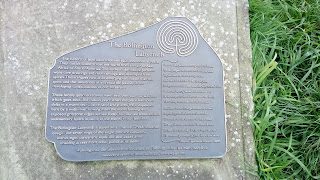 We took their word for it and returned to the boat.

As we chugged over the large Aqueduct - true to form, we encountered a boat on the approach - they had bow thrusters and showed off their control as we scraped along the ledge sideways... Not quite Costa Concoridia style but not far off...  I've been checking bilges hourly every since however! 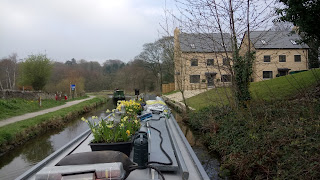 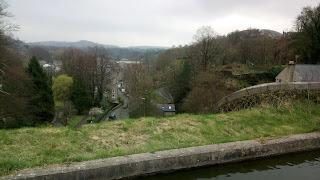 Passing Lyme View Marina, we made a mental note of pump out facilities and before long we came upon High Poynton.  Once again, we'd half a mind to stop there but looking at the map, it made sense to continue on to our planned destination...  admittedly it was now turning into a bit of a long day but we were 6 months late after all. 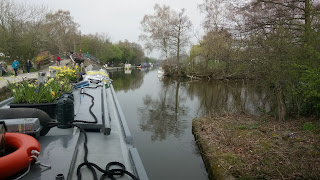 Somewhere to the left of the bridge is the home of "Braidbar Boats" - at least I'm sure I saw a sign for them... they've a long waiting list compared to many boat builders but that must be a sign of a good boat.. 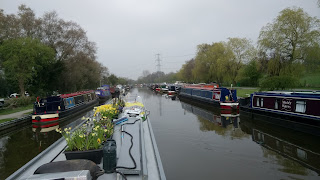 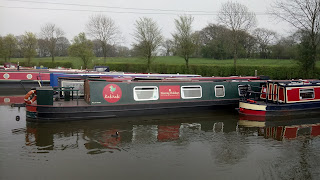 We also came across the old "Wandering Duck" boat that used to be run by Mark & Ruth... I presume they sold up and are now doing something different.

This section of canal has so many contrasting cut sides - from a lovely looking outdoor man shed affair, 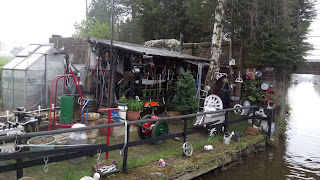 to rather well terraced canal-side garden... 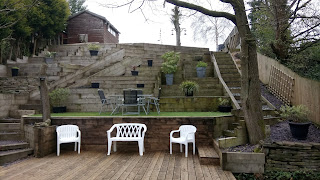 I must be weird (quiet at the back there) but I think I prefer the first one!

By now, we'd long since gotten past the "newly dredged areas" and it was slow going for us - we drag our bum on the bottom easily and although I was getting a bit frustrated at our slow progress  (YES I know it's a canal and we're MEANT to go slow) HAD it been nice WARM sunny day it'd have been much nicer.  That said, you can't help but appreciate the beauty in parts. 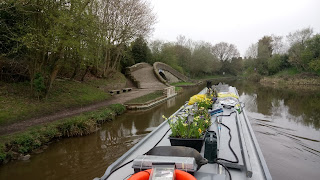 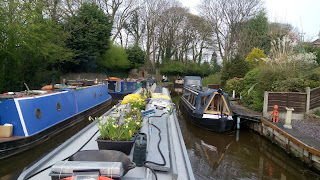 As we approached Marple, it became a little congested again and there are quite a few boats floating around with "CRT Envelopes" attached to them.. presumably they've overstayed on the 2 day moorings...  perhaps citing the fact they WANT to traverse the Peakforrest Canal through Marple locks as their reason...  Whilst I CAN see their point, you CAN go the other (long way) around like us... ok it's a pain but if you REALLY need to get to the Ashton Canal, it can be one and will take around 7 days!  THAT way, you're NOT taking up space for other visitors who DO play by the rules.. be them "good rules" or not!

Writing of the Marple Flight - we took a walk down as far as the fencing allows and (sorry for the crap photo but I had to reach over fencing as it's blacked off - as a sound barrier apparently.... 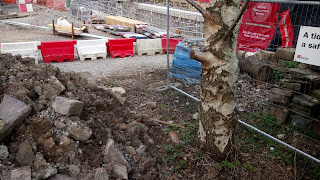 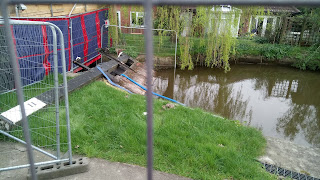 I'm no civil engineer (I have my doubts about Kier too to be honest) but it doesn't look like it'll be up and working again by the, already extended date of late May....HAPPY to be proven wrong! 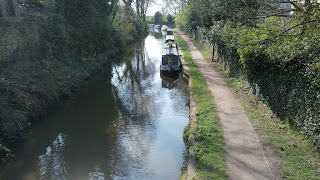 So here we are then - in the last spot before the bridge (near the Ring O' Bells)... under trees ... tress that have creaked and groaned all night during the wind.  It's dropping now and later today, we'll move off for our reconnaissance trip to Bugsworth and back ... NOT before however, we meet up with a lady who's booked to come on a trip with us later in the year  - she lives locally so we may partake of a lunchtime libation... just to be sociable of course.  I DID make a Galaxy egg chocolate bakey thing to be hospitable... it's OK and so long as you work it around your mouth with some cream/wine you barely notice the dry base! 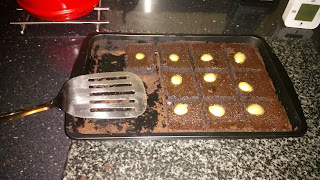 If you'd looked through the bridge on the left, you'd have seen Braidbar boats. There were a couple of new shells in there when I was there last week.

I'm sure your cake thingy is wonderful, anyway nobody likes a "soggy bottom"... LOL

The painted boat was for sale when we were looking for a boat 5 years ago. I believe the art work was done by BBC set artists and they had a website offering their services. I guess it never took off. There was a photo of it in London surrounded by Japanese tourists and their cameras. Not the best boat if you value your privacy. As you say, the paintwork is not looking so good now but it must be at least 7 years old.
If you want a spot to moor on the Peak Forest we stayed just before Carr’s swing bridge (no 30) for a few days and it was deep enough and away from big trees. Good walks in to New Mills and the wonderful Millenium Walkway. Bugsworth is an unusual place to moor but there can be road noise. You can moor very close to the Tesco near Whaley Bridge but I wouldn’t stay there, very gloomy and a busy road.
Steve
Tumbleweed 5

Have you seen this?
Bosley flight closed today
https://canalrivertrust.org.uk/notice/14988/lock-1-to-lock-12-bosley-flight-macclesfield-canal