Off the Caldon and onto the Macclesfield... through Harecastle of course

After our temporary battening down of hatches, a reasonably bright start was the motivation we needed to get going again...  There was a hire boat a short while behind me when I started the engine and pulled ropes through about 7.30 am - no sooner had I gotten the tiller on, had the boat and Captain mustered it's crew and sped passed lol  I guess they imagined they'd want to go faster than us or wanted first dibs at any locks in our favour.  It didn't matter in the slightest.

First stop once through the last lock on the Caldon canal was the water point at Etruria - we didn't NEED it but its become such a routine now - (more so with guests on board as you can never judge HOW much water they've used up) to stop and top up whenever a tap presents itself...  AND of course it means I could run a load of washing as we chugged along. 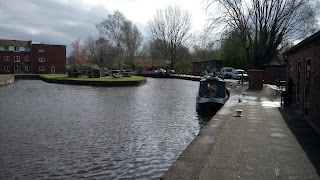 Having kept going until we arrived at West Port Lake, we then tied up behind a boat having a new gearbox fitted by RCR on "moorings reserved until 12pm on the 5th April... it being 11.30 and there being no sign of any boats we took a liberty!

Having a wander, I discovered the "hidden" facilitates  door under the visitor centre - no signage but the key fits and although I can't vouch for a toilet in the room, I CAN vouch for a shower as I heard a bloke using it/singing as he did so. 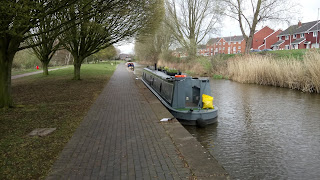 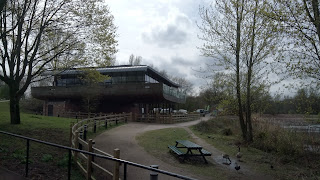 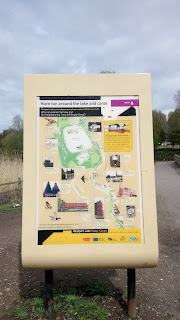 Going back to the "reserved signs" - we'd seen similar ones earlier.... it wasn't until we stopped at Heritage Marina for Diesel and coal the following morning, we realised they were for the TV crew boats that were filming the celeb 5 go boating thingy... WITH the aforementioned John Prescot, Amanda Barrie, Micheal Burke  Anita Harris and Sean Williamson - or so I'm told by the tow-path bongos.

Given they've been in the same area at the same time as us, they've certainly had a baptism of fire with the weather...  LITERALLY all seasons in one day!

Whilst moored, we had a walk up the hill to the shops (it's not too far on the way up but coming back with your shopping it feels farther) and then cast off - the aim being to get to Harecastle Tunnel before 3pm (last guaranteed passage for the day) - on arrival at said tunnel, there were 3 boats ahead of us queuing.  I got chatting  with Chris the CRT chap who 'checked us in'  and it turns out he follows us on twitter... or rather has recently been following us on twitter.  Nice fellow - then I suppose that goes with the territory.

Once he'd tested our horn and light, we were allowed to tag on to the end of the procession which suited me just fine... being at the back in the tunnel at least means no one is pushing you - on the down side of course it also means that if you do break down, there is no one aware of it until you don't come out the other end!

We have faith in Ellis though - I go above and beyond the servicing requirements and keep a very clean and full fuel tank.
On thing about being at the back I hadn't taken into account was that we appeared to be getting the fumes from the other boats "sucked back" at us - the fans perhaps pulling air through rather than pushing? - I dunno, but I certainly coughed a lot.  Andy on the other hand was inside loading up the tumble drier.

Once we'd emerged unscathed, we turned left (perfectly - ish) on to the Macclesfield canal. 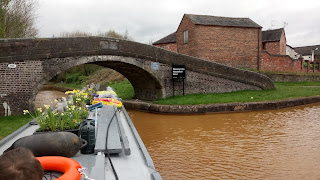 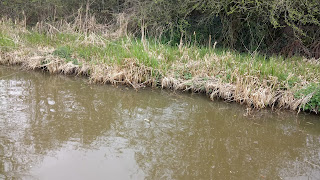 The water very quickly lost it's beautiful Ginger glow, and it was here we saw our first brood of ducklings of the year... 11 in all we counted - she's gonna have her work cut out.

We chugged on a little while - through a practical "stop lock " (although the level was about 9 inches difference so perhaps it wasn't stop lock) and moored for the night near the Rising Sun pub .

The forecast for the next morning was bright and sunny with a gentle breeze.

ALL I can say was that whilst yes it WAS bright, it was more of gale than a breeze - no matter, we chugged off with a quick stop at the Heritage Marina to top up with diesel and get a couple more bags of coal on the roof to perfect the ballast - until we drink our way through the wine stored under the bed, we've got a list to port until  the loo tank is over half full! 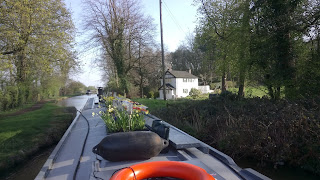 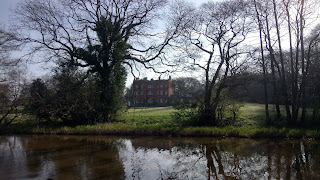 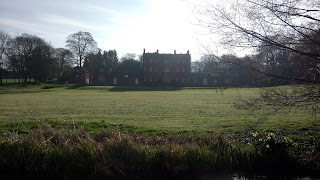 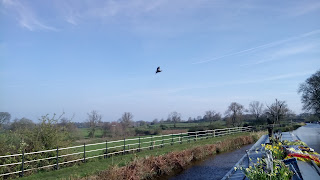 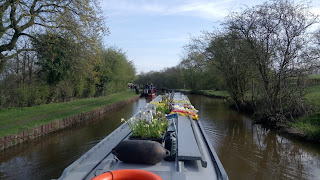 In this last photo, you probably can't see, but at the back of the boat, are John Prescott, Amanda Barrie and Micheal Burke - we said a cheery hello as we chugged on past but they didn't look overly happy tbh - perhaps it was too early for them and they were sick of boats messing up their pieces to camera.  No matter, we were having a lovely day and by now the wind had dropped nicely.

There's been  a lot of dredging going on around here lately and the spoil (if that's the right word) had been spread out along the surrounding fields. 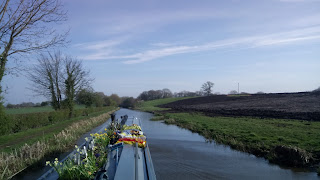 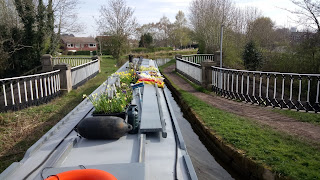 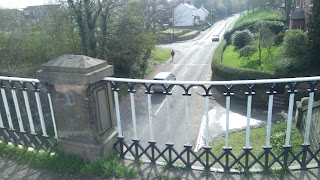 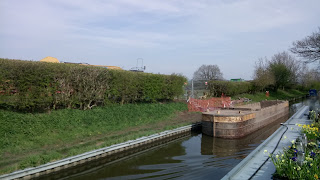 The canal is pretty much built up all the time and as you chug along you pass over lots of little but high) aqueducts.

We'd half a mind to tie up for the day but as it had tuned out SO nice, decided we'd go up Bosley Locks to make an easier next day.

Easy couldn't have be more appropriate because upon arrial at Bosely, there were CRT volunteers all over the place - expectant of more famous folks than us... I offered to sign autographs as they worked us up the entire flight in no time but no one seemed to want mine for some reason... Andy was also helping whilst I simply admired the views. 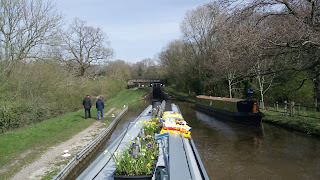 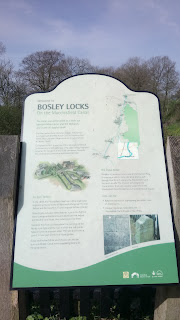 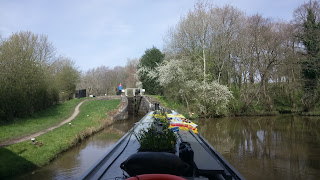 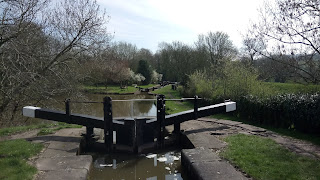 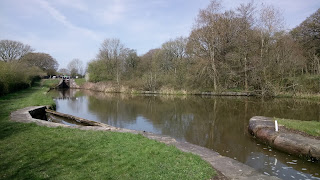 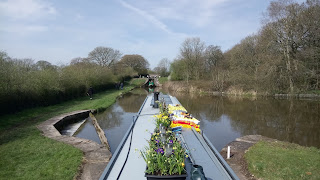 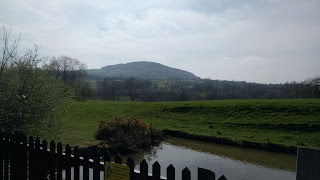 That hill is apparently called "Cloud Hill" - I think...

Talking to the lockies, the boss man said we'd be OK to tag on to the end of the long term moorings as the final one was free - it was also a very hand spot to be as by linking our hoses together it meant we could reach the water point - and on doing so, all the waterproof /cold gear was suddenly treated to a laundry day lol. 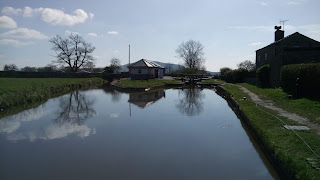 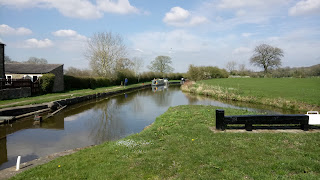 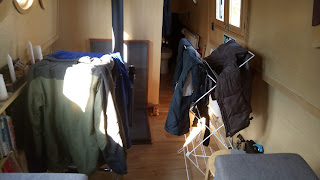 As the laundry dried, we put our feet up with a glass of wine and watched the sun go down. 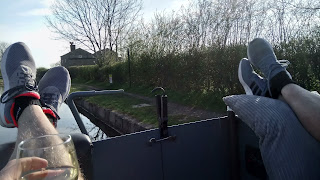 Lovely canal walk, we did it as part of our UK trip last year. Bus to Oakgrove near Macclesfield, walked the towpath to Havannah, and bus back. They were dredging the canal then, its a big job keeping it all clear and deep enough.

I do like the Bosley Locks - lovely to see them and I think you have persuaded me that we need to head that way this season after we have done the Grand Circle. Thank you for that!