So then - I didn't make it back here to finish off the update... not cause I was having a crisis or anything - just because the weather has been SO nice, we've just been chugging for the sake of it...Sorry I keep coming back to "mum" - this place has become my 'go to' when I'm a bit emotional... folk generally don't want to talk about it and do their best to steer conversations away from it - which is no bloody use to me as I could really DO with talking about it... hey ho.

You'll recall, our latest guests left us at Etruria to get their train home... I say home, they were off home briefly and THEN to catch a plane to Majorca for some sunshine... ahem, it appears WE'VE had more than them lol.

Whilst filling with water on the Caldon arm near the Etruria Industrial Museum, I was watching a boat coming up the lock and went to close the gate - getting chatting (as you do) they were wondering if they'd left it too late in the day to begin the Caldon...IE to get past the grottier bits and on to nicer places to stop.  I reassured  them that we'd started it later in the day then they, and to keep on going until after the 2nd lift bridge...

Taking my advice, they turned up the arm and went passed us - still on the water point.  I noticed the boat stopping and thought they'd chickened out...  HOWEVER, it was actually a stop so the bloke on the boat could come and say hello - he natters on Thunderboat (the forum) like I do and has been keeping an eye on our travels.

After they'd gone and we were full, we began our descent of Stoke locks.

At lock 37, a train was being held so WE actually made better progress than they. 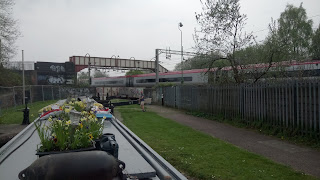 by the next lock we'd caught up with a hire boat and spent much of the day just behind them... 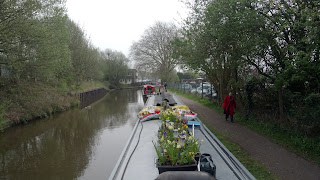 On the subject of Hire boaters...  I have to say, that apart from the occasional "drunken party" most of them are far more considerate than boat OWNERS.  This was evidenced a bit later on before we arrived in Stone, when a boat OWNER, 'stole a lock' from aforementioned hirers in front of us - a boat had just come up and our hirers were getting into position to drop off their crew when "Mr Angry" started shouting at them for buggering about and began to empty the lock.

On seeing me walking down to see what the fuss was about, "Mr Angry" became "Mr apologetic" and helped them through the lock... AND apologised for all his swearing... most odd but I have to admit, HAD we not have been there, I doubt he'd have had a change of heart.

The Hirers accepted his apology and continued on their way a little ahead of us until they offered to let us pass.  This was helpful as we needed to top with water at Stone bottom lock and whilst the tank was filling, I nipped into M & S to get a ready meal for tea.

When I returned, the water wasn't far off full so we called it a day and then carried on and got about an hour away from Great Haywood before stopping for the night. By now it was about 8pm and getting cold so it turned out to be a good move.

The next morning, bright and early we departed - hoping to beat some of the bank holiday traffic - a lovely misty start to the day but before long  the sun burned it away nicely. 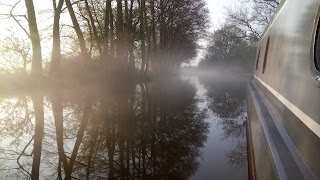 Before long we were at Great Hayward where we chucked a right turn onto the Staffs & Worcestor Canal. 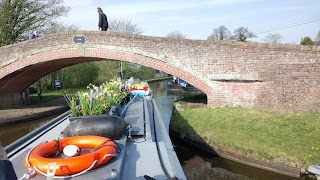 Such a nice canal - with the lovely Tixell Wide  - WHERE whilst we chugged passed (on tickover as always) a chap shouted from his boat that he reads the blog AND didn't have anything nasty to add so I took that as a bonus! 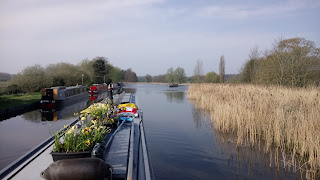 We ended the day at Penkridge - just above the Cross keys pub...

Penkridge is another "nice" town... not a lot to it but very pretty and friendly... the down side being the Coop didn't have air-conditioning so it was unbearably hot - I'd hate to be in there in the height of summer!

As we left the following morning - a little later than intended due to the crew insisting on a lay in, queues were already forming at the first lock and by the time we'd gotten through (about 10am) there were another 4 boats behind us waiting to come up... 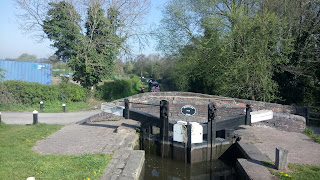 We chugged on for a few hours and then Andy got a call from his dad to suggest meeting for lunch "somewhere" - The Anchor pub was agreed on so we stopped off there ... His folks brought with them the new front fender I'd ordered the other week and after lunch, we continued towards Wolverhampton.

There is a "really thin bit" that is mentioned in the guide not far from Autherley Junction... and of course we met 2 boats going through it - luckily, they both got out of our way and before long we turned on to the Shroppie. 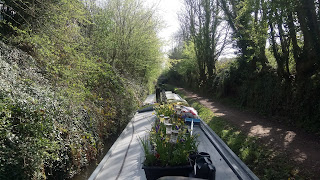 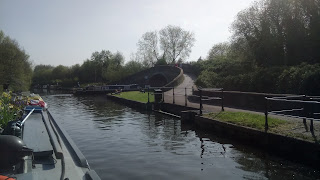 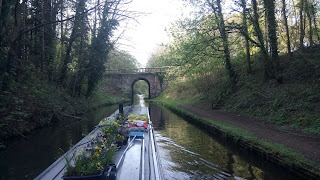 We chugged as far as Brewood and tied up for the night on the visitor moorings.. I must admit, we WERE a bit close to the bridge but no one hit us as it was late when we arrived...

We've had a lovely run down here and given the "Easter Break" not made bad progress... it's a good job we departed on the Thursday though and got the bit between Stoke and Great Haywood under our belts as I'd imagine that would have been queue city.

The last couple of days, we've been up to Wheaton Aston (for water) and then back to Brewood (for supplies)... today finds us moored between bridge  7 & 8 - about an hour or so away from Autherley Junction where we'll head back to in the morning to collect our next guests for our exploration of the Wolverhampton area - this time tomorrow, we'll be puffing our bellies out working our way through the Wolverhampton 21