As we're still sitting out the awful stormy,wet,windy and now Hail-stony weather here at lock 42E in Marsden - this morning, I decided to take a look back at our travels from last year...

Total distance traveled:  504 miles, 316 locks and more swing bridges than you can shake a stick at.

This is just an overall summary - in reality, we'll have covered a fair bit more as there were multiple "out and backs" within the route.

Here's a map of where we went: 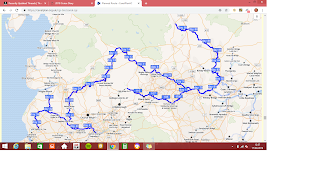 The "days" mean nothing as I just entered the points we passed through into the planner and suggested we'd only cruise 3 hours a day... it was only to create the map really.


WHILST we've been holed up here hiding from the weather we've nipped out a couple of times - getting soaking wet in the process... it really was  good move coming up here on Friday rather than Saturday as originally planned as if we'd have had to travel through the storm, we'd have been  thoroughly miserable.

The River Colne has been rather Angry - that and the beck that flows into Marsden has meant the town has been VERY close to being flooded - with people being evacuated on Friday night for a while... 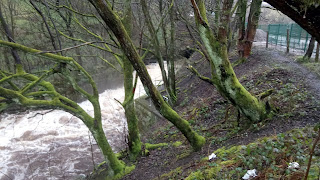 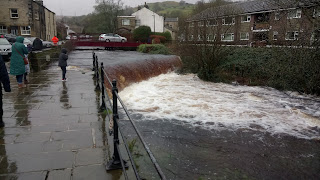 Places further down and across, haven't been so lucky.

Hebden Bridge is flood... the "warning sirens" have been going off in Todmorden... Brighouse Basin is flooded and the River Calder is generally putting the flood defense planners to the test.

Here on the Top of the Huddersfield canal whilst the level is a bit up - fingers crossed it will drop before morning... by the looks of the forecast, the worst of the weather is gone for now.  Later, when the trip boat officially stops running and returns to it's charging point, we'll chug up to the tunnel entrance, fill the boat with water to bring the pointy end down as much as possible and then wait until the CRT men arrive in the morning to escort us through.

I won't lie - I'm dreading it.. I HATE tunnels at the best of times... so the longest,deepest, narrowest in the country, ISN'T something that appeals to me very much. Still, once we're through, we can carry on with our journey to meet our first guests of the season - stopping off in Manchester for a couple of days on route.

Mark
Have you protected the leading edges of the cabin like we did for the trip through the tunnel?
http://www.narrowboat-waiouru.co.uk/2016/05/an-interesting-experience.html

CRT, or BW as was, actually took the tiller and we barely touched the sides. I was expecting to feel claustrophobic but it was such a fascinating experience and one that I wouldn't have missed.