Can you see the fatgue on my face? - blooming heck that was a hard couple of days...

We left shite hole Ashton on Wednesday morning bound for Telford Basin  (Manchester Piccadilly Village) - Moving on from Portland Basin about 9, we figured we'd have plenty of time to get down the Ashton and do the Rochdale...  (I say "we" - the crew had revolted and refused to get out of bed for an early start)... 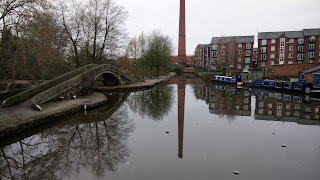 Initially the canal improved nicely... indeed, after about 20 mins chugging, we came across some lovely canal side property. 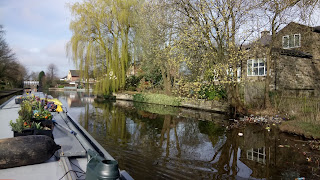 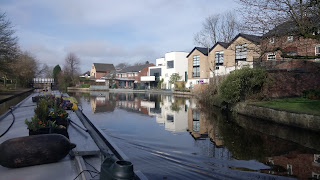 In fact, by the time we got to Droylsden, we even commented we might stop over there for a night on our trip back up later in the year. 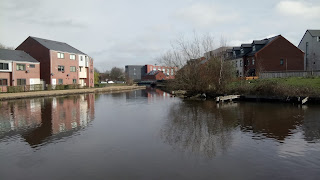 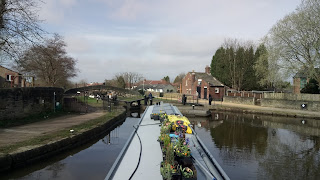 I'm afraid it was literally down hill from there on in.  Faulty paddles, broken locks (as in handcuff keys) and shallow pounds... not to mention a host of unsavory looking types on the towpath ... and no, I'm not talking about Andy!

ACTUALLY, I did most of the locking as it happens - you see, when it comes to tolerating drunk/drugged thugs difficult people, I'm much less likely (hard to believe I know) to get their backs up than Andy is... me preferring the 'chatty friend' option and engaging them with helping me push gates etc.

It was particularly slow going as most of the locks were empty with the bottom gates both open -  AND that meant trying to balance them shut before beginning to fill them... in the end, I adopted the approach of cracking a paddle slightly open to let some water flowing down THEN closing the gates - it was the only way on my own to do it - getting the boat into the side being almost impossible...

OUR biggest problem came with lock 11 - one of the bottom paddles was "stuck" half open... and only 1 of the top paddles was working... ergo, we had to really lower the level of the pound, create a "Spanish Windlass" AND use the boat to pull the gate open...  it took an age. I phoned CRT to report it.. they said they'd call me back! - still waiting.  Btw - whilst mentioning CRT ... I'm not one to bash them... far from it, they have a difficult task given the funding available but what really gets on my nerves is the blooming follow survey texts you get every-time you report something... TRYING to get you to feedback about how good your experience with them was... you see, the thing is, when answering, you DONT know IF they've actually DONE anything about the call - so the only thing you CAN give feed back on is the person who you spoke to - whether they have  actually passed the info on to a works team or not, is anyone's guess.

ANYWAY - after about an hour of faffing about, we finally got the gate open and through.... but not before we had to run some water into the pound to get the boat floating again... 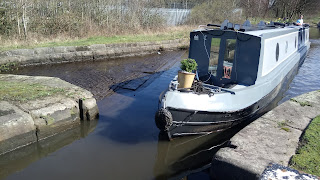 During our descent of Ancotes locks, the "towpath dwellers" became more abundant and of a lower standard shall we say.

The canal - especially around the National Cycle Centre, soon become a home for abandoned shopping trolleys. 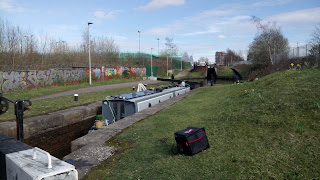 For the entire canal, we'd glided under each bridge in neutral to minimise the risk of  fouling the prop on a trolley.  PLENTY of underwater clonks but luckily nothing on the prop - well, nothing worse than a few carrier bags.

Weather wise, it was actually a really lovely day to be chugging  and as we descended into Manchester, folk appeared a bit more jolly... including us, despite how tired we were. 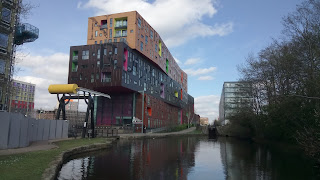 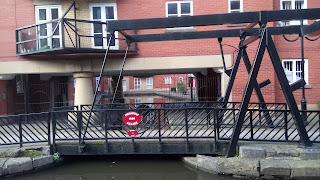 By now though it was getting on for half 3 and we were knackered feeling the strain so we agreed to pull into Telford Basin and wait to do the Rochdale 9 the following morning. 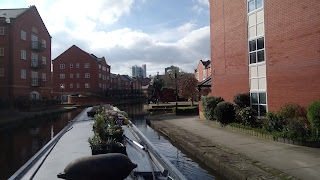 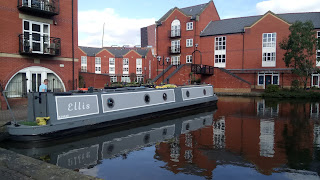 I must say, that WAS a good decision - It's gated access so we couldn't both go out together (and be sure of getting back in) but it DID feel safe ... AND the residents seemed friendly enough - well except one woman who came and told us NOT to feed a goose some bread.  Her interference was especially unwelcome as what she didn't know was that we'd spent about an hour trying to help this wretched thing with a broken wing, out of the water to escape a couple of bullying geese.  Eventually, once fed (and after I'd managed to lift it out of the water using a combination of scaffold plank,Vulcan death grips and close calls) it toddled off  - hopefully away from the other hostile ones.

Yesterday Morning (Thursday 21st) after a leisurely breakfast of Banana pancakes, we pulled ropes and set off towards the infamous Rochdale 9. 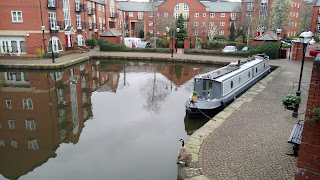 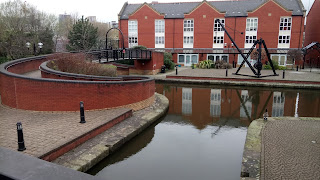 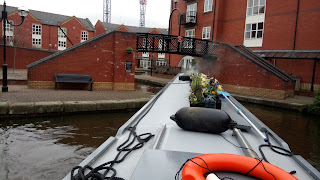 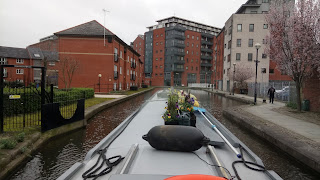 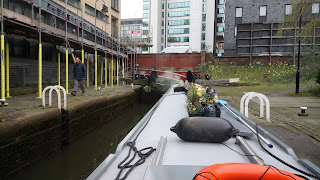 If I'm honest, the experience underwhelmed us... it's just NOT a nice way to come into Manchester...

the top lock of the 9 starts off looking innocuous enough - but there is a lot of water coming over the gate so it takes a long time to equalize... once through it, you have to hang around ages again whilst the next lock fills...  it's just not nice - signs suggesting that sexual or lewd behavior will be prosecuted... HOW anyone could maintain an erection under those conditions is beyond me anyway! 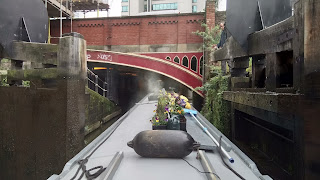 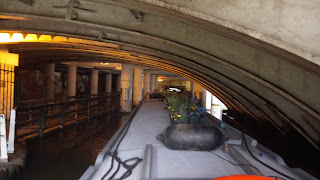 Still, it wasn't long before we were on Canal Street - 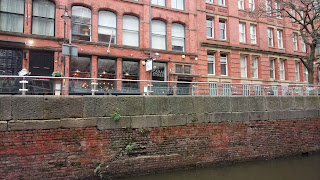 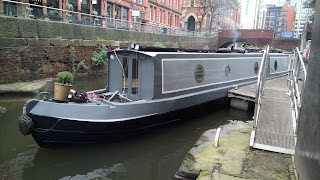 and it was here we spent quite a while with another broken paddle  at lock 86 -... the gear cog didn't engage with the uppy/downing bar thing.  Another phone call to CRT made - followed by another "survey"...

Eventually, with the use of brute force (and a lump hammer) the lock filled and paddle "let back down" we were on our way again. 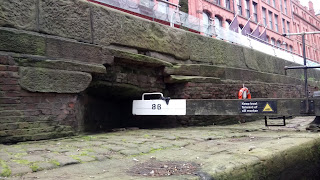 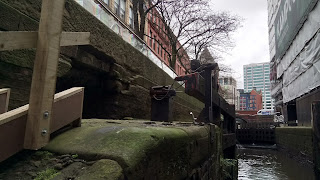 Working our way down, we met a boat coming up which did at least mean the final 5 locks were in our favour - STILL Way too much water flowing over the top gates though which made it difficult to open them.. I managed but my back knows about it today... 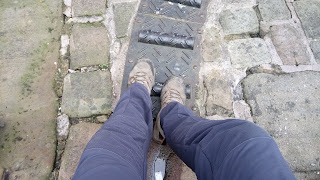 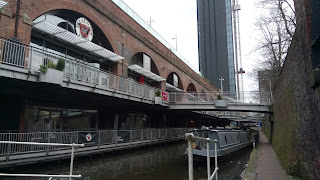 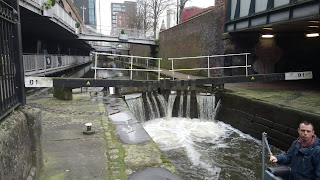 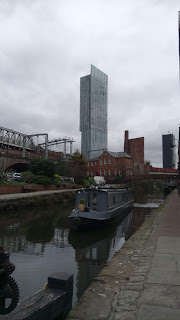 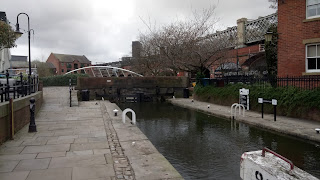 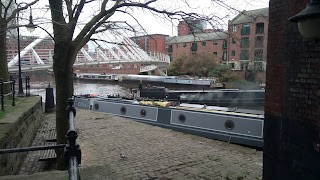 The final lock into Castlefield Basin was an absolute bastard  git.  SO much water pouring down and no one else around to help me, it took AGES and required careful use of windlass and legs on the gate simultaneously to open it -on a sunny day with folk in the pub along side, I'm sure help would be forthcoming though...

Alas for me, it was early and no-one was around.

When you arrive (by boat) to Castlefield Basin, it's not obvious WHERE you can moor or where the water tap is.. we did a bit of a tour on the boat, numerous winding's and then settled just near the bendy footbridge...  Having later had a walk around, next time we come, we'll head further around the corner past the "Wharf"  pub.

Last night was actually not too noisy - especially considering we are under/next to the train and tram lines.   We're spending another night here before setting off down the Bridgewater tomorrow.

The amount of water in the Rochdale Nine is a long standing characteristic. I have read conflicting reports about the reason -it has seemed to me that most of the locks have no bywash and so the flow of water is necessarily over the top gates.

We did have one occasion ascending the bottom lock when it took a considerable time to open the top gates - had to deplete the upper level enough to nudge them open.

On the other hand, I have seen comments which say that they were at least built with bywashes but some may have become blocked (temporarily or permanently) when the flight did not have as much through traffic.

When we last came down, 2017, we thought that it was overall rather better than before - talking to bystanders, of whatever dress code, is generally the best way and frequently results in assistance with heavy gates or bridges.

When we locked up the Rochdale 9 there was so much water coming down it covered the towpath and the quadrants when we emptied the next lock. We also had 3 teenagers on board, so a useful crew although not early risers! That was about 10 years ago now.