On to Etruria - well that was the plan anyway...

You'll recall when we arrived at Anderton Boat Lift we couldn't go down until Friday - So, rather than just sit around, we figured we'd carry on with our journey South and "do" Anderton at a later date... we've trips with guests planned for NEXT year anyway so it wasn't too great a disappointment.

Whilst moored above the lift, we did have a couple of bonus experiences though.  The first being bumping into (not literally) a fellow boat forum celebrity on his boat.  He goes by the name of "Mr Stabby" (well at the moment anyway) and on spotting his boat (actually, it was the funky moped that caught my eye) - I called through the open front door "HEY STABBY" - to which the reply "NOW THEN YOU GINGER PUFF" came echoing...  As it was our first meeting in person, we were both on our best behavior and it turns out he's a really interesting and quite 'normal' (despite what his internet persona would have you believe) chap. 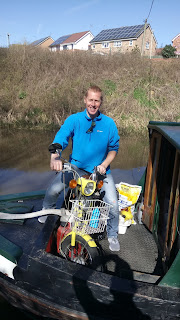 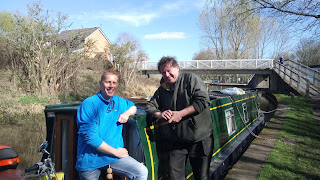 He even let me ( or at least didn't object when I did) model the afore-mentioned moped!

Ater a quick walk around Anderton (not the nature reserve as a pub lunch beckoned) we headed back to the boat and began an afternoon of chores. 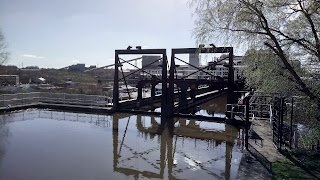 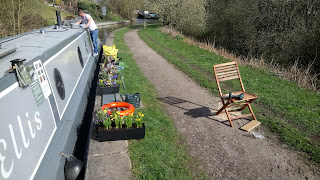 Everything came off the roof so it could be swept and washed and whilst Andy was doing that, I sawed up some wood I'd fished out of a lock a few days earlier and then began "darning" the fly screen nets over the port holes... you may remember a few months back I got distracted talking to a dog on the towpath (as you do) and got too close to a tree in the process - WHICH put holes through 4 nets on the starboard side...  I tried to replace them but the company that made them has stopped (or is stopping) trading now do to having children!

Whilst I was doing my mending, a boat turned up behind us and suddenly went in to reverse... I have to admit, at first I was thinking "What is this plonker doing" whilst at the same time preparing my "I'm friendly to everyone face"... it turned out a few mins later it was a couple we'd gone down the Rufford branch of the Leeds and Liverpool  with LAST YEAR who'd spotted us and wanted to drop in a bottle of wine as a thank you for our help - it WAS a horrible wet and windy day when we went down with them and also HER (Jayne with a y) first time boating...  given the conditions at the time, it really was a baptism of fire for her.  ANYWAY - it was really lovely of them to stop by and especially so given the gift .

After a brief catch up - during which we forgot our manners and didn't even off THEM a drink, they departed to continue on their trip and we got back to our chores.

I have to admit- my darning isn't exactly invisible (despite what the thread says on the packet) but at least fly's wont get through it!

Next morning, we decided we'd set off ourselves with plan to get to Harecastle Tunnel in time for Wednesday passage - TURNS out we needn't have rushed, 'cause if I'd read it properly, I'd have know the winter time-table was now over!

On departure, we topped up the water tank at Anderton Services and continued our way along the Trent & Mersey canal.  I dont know whether it's always as low, but progress was slow as a result of shallow water... not that we should be rushing along anyways but you know what I mean.  As we approached 'Lion Salt Works' (on tick over of course) a lady stuck her head out of the boat we were passing and shouted that she reads this blog - I appologised of course lol.

There as some lovely canal side properties along this stretch and we dreamed about owning quite a few of them... this was our favourite so far. 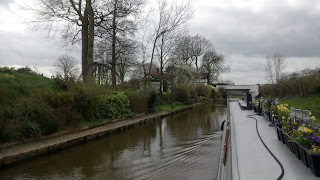 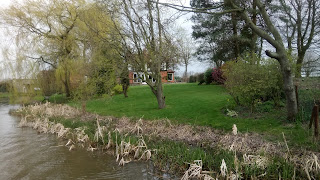 We chugged for 11 hours and 45 mins and ended the day at Rode Heath... Towards the end it did get rather cold so we were pleased to get in doors with the fire blazing.


IT turned out, Rode Heath was quite a nice place to stop for the night anyway.... there was a pub canal side, (although we didn't partake on this occasion and we had a lovely and quiet evening's sleep... which came very easily after such a long day. 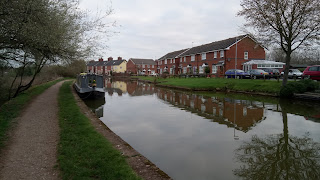 We got up with the daylight the following morning and chugged on - planning to get to Harecastle Tunnel with an aim of ending our day at Etruria.   The double/paired locks were easy enough - although it was a little frustrating occasionally when I was all lined up to go in one side, only to find the lock was broken and a bit of zig-zagging was required.... 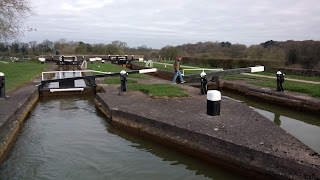 The closer we got to the tunnel, the more ginger the water became - I'm thinking about petitioning CRT to arrange ALL canal water to be this lovely colour... 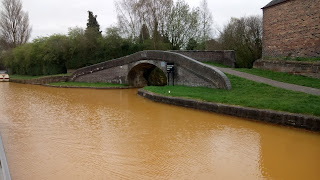 We chugged on - passing the entrance to the Macclesfied Canal (which we'll be heading up next week to collect our guests) made our way to  Harecastle.

When we arrived at the tunnel, we had to wait about 40 mins for a boat that was coming through from the other direction.  The CRT chap checked our horn, lights and suggested we don our life-jackets.  He really was the right man for the job - really friendly, positive and a thoroughly like able bloke. 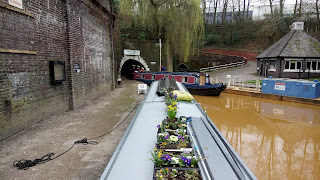 We didn't take many photos IN the tunnel... AFTER Standedge, tunnels are very much a  let down 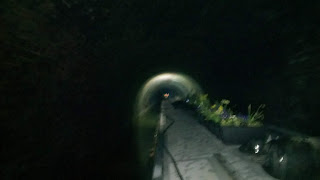 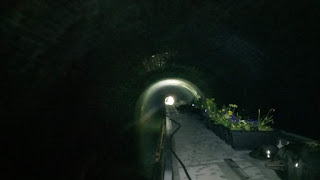 The only difference with this tunnel and some of the others being the doors get closed behind you and the doors at the other end, dont get opened until you are nearly through... you can hear the ventilation fans pushing/pulling air through the tunnel - getting louder as you reach the other end... 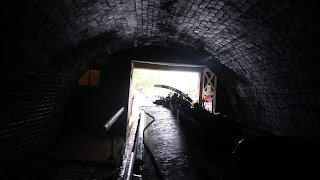 We arrived at Etruria about lunchtime and as the sun had come out, once again we changed our plan and carried on chugging... all the way to Stone.  Stone is a lovely place - (I'm skipping past Stoke which apart from the old pottery kilns, isn't really much to write home about...  I'm sure it has it's nice parts, but we had no intention to hang around there so just chugged on through... we'll probably investigate it properly in the future if we have guess who want to visit the Middleport pottery factory. 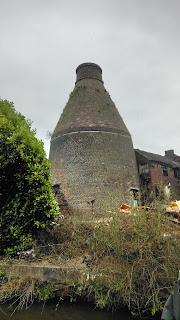 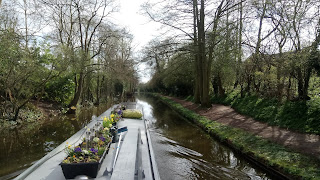 WE EVEN overtook a train!!! 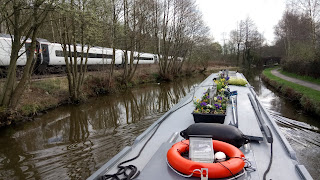 As we arrived in Stone, I couldn't help but smile at the naming convention of this hire company... 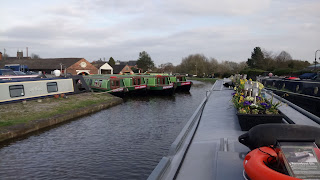 a very good choice in my opinion!

Our day ended just through Stone bottom lock near the entrance to Aston Marina...  its here we've half a plan to spend our winter months. Tomorrow, we're going to book in for a couple of days (on shoreline with water on tap) and visit our friends Eddie  & Wendy' who've over-wintered here...

Last year on our trip to the UK, we walked the towpath from Macclesfield to Congleton, a lovely part of the countryside, and a good walk.

We met Stubby but I don't know him online by that name and still cant remember it, I spotted the yellow moped first