Monday morning arrived and apart from it being windy as buggery (that's a meteorological term), it was bright and not TOO cold.

Our day didn't start especially well as (due to aforementioned wind), trying up on the water point in the basin to fill the tank was a nightmare ... mainly because we were ambushed by a strong side wind which (despite much engine power being applied) swiped Ellis into the Marina.

Captain Ginge was NOT happy.  The crew also had a bit of a revolt during the incident and it took a good half hour before normal griping/sniping could resume ;-)

No harm was done, no other boats touched just an embarrassing start to the day. 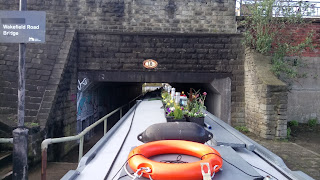 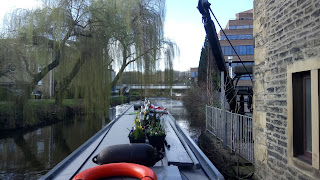 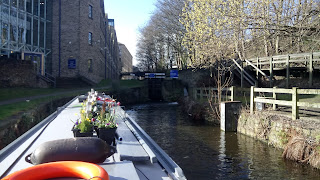 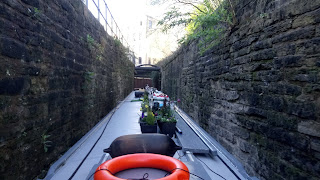 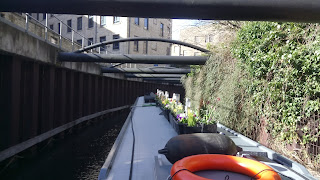 Wind a side it really was a lovely bright day for chugging.  ALSO a first for 'Ellis' being on a Narrow canal...

As we began our ascent, tow-path walkers kept stopping and making comments along the lines of "oh you've picked a difficult one here" and " you'll never make it to Slawit before it's dark"  etc. etc.

Thing is - it didn't matter whether we DID or not really... we're happy to bash a peg in wherever we can get in but undeterred, we plodded along enjoying the relative ease. OK - yes, it's too shallow to get to the side in most of the places - even the lock landings are difficult but ignoring that, the locks/gates are, if anything, easier than some of the broad ones on the Leeds & Liverpool.

It threw us a bit at lock 7E ... when a handcuff key was required in place of the CRT key up until that point...  no  big deal.

Our plan for the day was to get to Slawit ... find some mooring rings and tie up to sit out the storm heading our way...  Just at the last lock for the day (21 I think ) I met up with a CRT van who'd stopped to say hello and ask if we'd had any problems coming up - US being the first boat this year apparently.

We hadn't - well apart from a floating wheely bin that took a bit of persuading to move so I could open the bottom gate at lock 20 it'd been plain sailing (every pun intended). 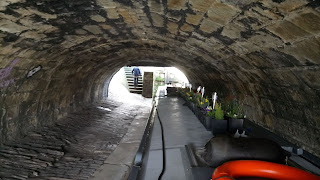 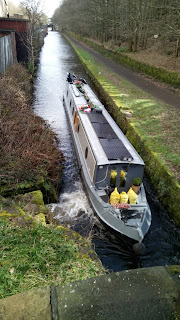 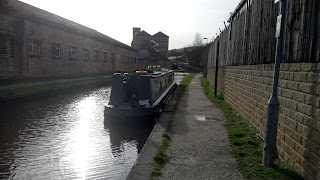 Once tied up, we had a bit of  a wander into town - it's a nice little place acutally... quite an unexpected Gem. 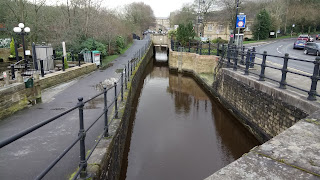 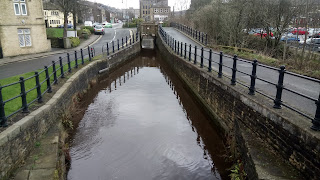 We're moored in a bit of a wind funnel but we're away from potential falling trees (always a worry when it's windy) and on rings rather than pins.   I must admit, the last couple of nights have been rough though as storm Gareth? has been trying his best to tip us over - the waves lapping at the bow as the canal gets funneled  in from the winding hole a few hundred yards ahead have been quite interesting.  Luckily neither of us gets sea-sick... NOR much sleep though as it's been SO noisy.

The forecast is bad until at least Saturday and when I LAST looked, even that had gone down hill...  Our plan is to sit it  out until Sat morning and then begin our final ascent - aiming to get to Marsden (ish) for Sunday... have a walk and then on Sunday night, take the boat up to the tunnel entrance ready for Monday morning's passage.  I still have doubts about the height of the solar panel brackets but have the angle grinder to the ready should they need a couple of inches cutting off..

BEFORE then - we're going to have to tackle lock 24 E ... the guillotine one which reportedly is a bit of a bugger... required on occasions use of a "Spanish Windlass" -It won't be helped by all the water that is currently coming down... 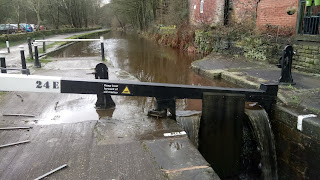 It's approach may also be a problem given the level of water at present... we might have to run some past us to lower the level  a bit to "fit under" the bridge on the tight bend, behind a weeping willow tree with a viscous by-wash coming in - ADD a bit of wind to it and it's going to be interesting lol 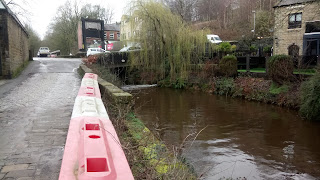 TODAY - judging by the rain STILL lashing at the portholes, is going to be spent inside - hopefully I'll finish adding the final couple of cruises to our 2020 Schedule on the website (https://www.narrowboatellis.com/2020-cruise-diary.html)... I really don't like doing the website ... 'would much rather be out chugging... then again - unless you're a duck ... and a particularly aerodynamic one at that, it'd be a bloody rough day to be on the move!

ETA - and now even Saturday is gonna be pants... hmmf! 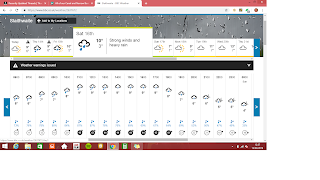 Hope you get chance to visit the Handmade Bakery in Slawit. Very good homemade baked beans on toast along with everything else.
Make sure you keep looking behind you as you go up the locks to Marsden, some of the views are wonderful. Enjoy and I hope your solar panels get to stay in one piece.
Pip