Having gotten to Market Drayton, we had a lazy start and after a quick walk back into town to get some Pepsi-max (other carbonated soft drinks are available) that was on offer in Iceland (the freezer shop - not country (although carrying it back it felt like it might have been) ) we chugged round to the marina to top up the diesel, get some more anti-freeze and de-ionized water for the batteries.

Changing the coolant and topping up the batteries is on my "un-written" list so now at least I CAN get around to doing it when i find it!

We quite liked Market Drayton... we'll spend more time here at some point in the future. 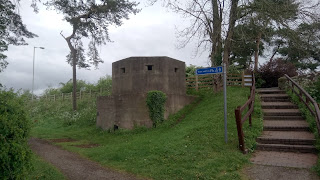 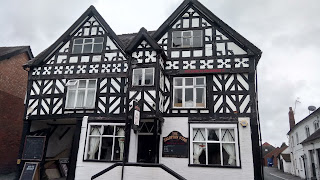 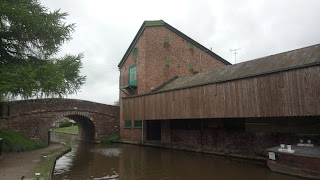 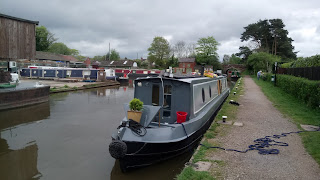 It annoyed me thinking back, that at Norbury Junction (a couple of hours chugging behind) I'd spotted a sign saying "LAST DIESEL & SERVICES FOR 10 HOURS CRUISING"...  cheeky beggers.

Topping up (at 76p a litre) we then went over to the water point and topped the tank again - whilst there, I spotted the pump-out machine was on "pause" and it was a shame we couldn't' make use of it... well we could have but that would have involved another 2 180 degree turns and half an hours buggering about for just 3 days worth of tank emptying... instead, I walked beck to the boat behind and told him that it was on pause in case he needed to use it... it turned out he'd just emptied his too... oh well - the intention was there.

Chugging on, towards Audlem, the clouds began to get darker and darker...  SOMEONE had checked the weather forecast (I forget which app we're pretending to believe in these days) and it was only a 20 percent chance of rain ...

This video has evidence to the contrary!

Once I'd dried out a bit, (the crew were hiding indoors) before long, we arrived at the top of Audlem locks.  OUR plan was to go down the first couple and then moor for the day - having accepted a kind offer of help from Steve and Angela on Nb Tumbleweed who are moored in the marina at the bottom.

On our approach, we spotted a familiar boat in the lock - once again we'd caught up with Mike and Christine on NB Alchemy.  Mike suggested we might want to leapfrog them as we might make faster progress than they but as we were stopping, we thought we'd balance out the karma a bit and work them down the flight once we'd gotten to our mooring point.

Andy has only just discovered his little legs can span an open gate to save walking all the way around...  I was poised with my camera expecting a splash but not this time... (I'm sure it will happen) 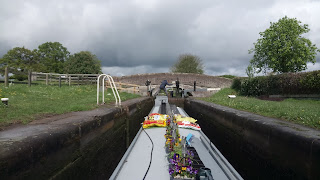 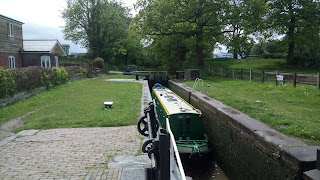 We picked a bad spot to tie up though as when we returned to the boat, the lovely chaps from fountains were grass cutting - ergo, the side of the boat is now covered with clippings.  grrrr.. 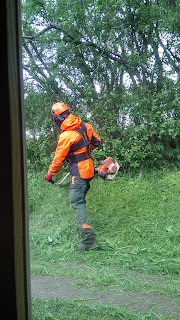 The next morning, we began our descent of the remaining 12 locks and before long, Steve and Angela arrived - (windlasses in hand) and helped work us down.  It's always nice to chat with other boaters and get their local information. 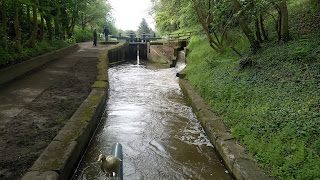 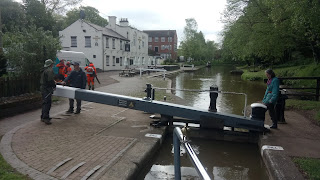 Once at the bottom, they hopped on and we chugged down to their marina for the guided tour.

I must say, it's quite nice - well laid out and despite it's size, it feels like it's got plenty of space.  It's certainly a consideration for the winter after next -  I say that because we're 90% convinced we'll spend this winter at Aston Marina in Stone.

After a quick nosy around their boat, we got back on board Ellis and continued our journey to Nantwich.

With THEIR local knowledge, rather than chugging TOO far and not being able to find a mooring space, we stopped after bridge 91 and then had a walk along to the aqueduct.  ONCE again spotting Mike and Christine... this'll be the last meeting for a while as they're heading towards Anderton now whilst we'll be going up the Llangollen.

This morning (it's Saturday now) I heard a boat going by before 8 am and on sticking my nose up against a porthole (I'd just started writing this) I spotted our friends Roger and Jane on NB Paneke chugging past...  he shouted they were turning and would be back.

Thinking they might have time for an early morning coffee, I quickly began one of those emergency tidy up jobs you do when un announced visitors arrive AND began a shave...  my timings were out because no sooner had I dragged the razer down one side of my face, they reappeared along side for a natter. 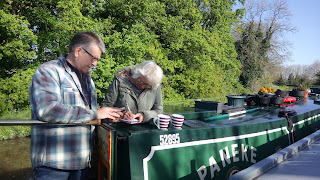 For some reason - I didn't think to wipe off the shaving foam and went out back for said natter and a few towpath walkers gave me funny looks... BEING ginger (and therefore fabulous) it doesn't matter.

Having a quick catch up, it turns out he's injured his knee so they've altered their original plan for easier cruising grounds (well , waters) which is a shame... I offered him some of my " good" pain killers but it transpired he's got his own but doesn't like to take them!.

I was a bit narked that I'd NOT taken the time to update the blog LAST night as it turned out they'd been moored over night where Mike and Christine had been (they left just as we were chatting to them last night) ... if I'd done, so they might have read my ramblings and we could have had them over for a drink and natter.  Oh well - hopefuly our paths will cross again with MORE time in the future.

Meanwhile, we needed to stock up on food for our guest who join us on Monday.  Despite the sunshine, it was a bitterly cold morning - and as I'd not topped up the coal buckets yesterday, I hadn't even lit the fire this morning...

Walking into town, we also picked up a new earpiece for the walkie talkies I'd ordered from Ebay and had sent to a Premier local  - after which we found a Sainsburys AND a B & M where we bought far too many plants to comfortably carry back to the boat along with the shopping... t's done now though so we should be ok until we can call into Tesco in Ellesmere on Wednesday (ish)...

THIS stuff tickled me but I did resist the urge to buy any! 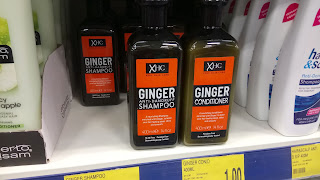 Another thing we saw that amused me, was the sign on the rear of this horse and cart walking through the town: 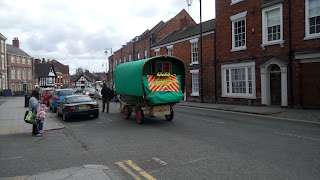 I'll get you for that photo Mr Bowes. How I wish I'd got one of you this morning ha ha. The quick tidy is never necessary for us. The fabulous descriptive word for that is a 'scurryfunge' hopefully we'll meet up again and have time for a proper catch up. Hope you're enjoying Nantwich. Chin chin.

20 per cent chance of rain doesn't sound like much, but it possibly sounds more likely if you say it's a one in five chance. Either way, I always say it doesn't matter what the chance of rain is, if you get it, you get a hundred per cent rain.

Can't read the sign on the back of the horse and cart ... what does it say?