Plague Ship on the Llangollen...

Yes I know it's been a few days since I've been back here - whilst the rumors of my death may have been exaggerated, it IS fair to say that currently this ship should be in quarantine...

In olden days I believe we would have flown a "yellow flag" to warn of infection but as things changed, so did the meaning - ergo, if we flew that one now it would be mean we were cleared...

Yep MAN flu has arrived with our guests who joined us at Nantwich...

Well we're blaming one of them who was sniffling...  Andy came down with it first and even super Ginge (aka me) is really struggling now..

OF course - as you might expect from a Ginger super hero, the show must go on and as such I've barely made a single mutter/cough/splutter or dribble...  well at least not in the food anyway! 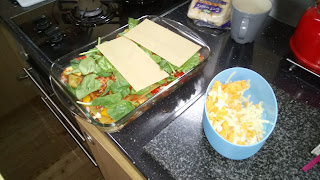 This week, it's vegetarian cooking - I must say, a veggie lasagna came out rather well... so well, I may ditch mince in future.

Some would say Lasagna is a "cop out" BUT when you have new guests coming on board, a boat to clean and tidy - introductions to do AND a few hours chugging to get under your belt before trying up, you need to have something in the oven ready just to eat ...  besides that, we like it! 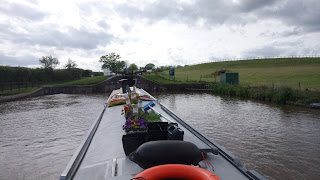 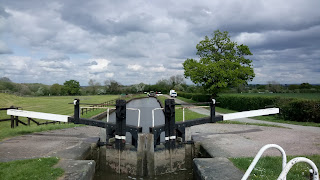 As we chugged along the Shropshire away from Nantwich (which incidentally really IS a lovely town and we'll spend more time here in the future) we made the turn on the Llangollen branch and began at "the lock" that has been causing the trouble...  mainly because idiot boaters have been leaving fenders dangling and getting stuck

NOT these idiot boaters... we took ours out and had plenty of room to spare - having been measured for Standedge Tunnel we already knew we were thinner than the alleged 6'10 beam...

IT was by now a bit windy and the rain didn't look far away - we plodded on as long as we could be bothered before tying up for the night.

The next morning off we went again - sun shine breaking through the clouds so we made the best of it. 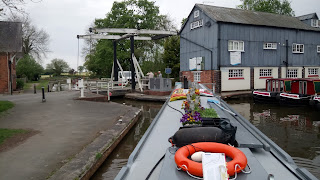 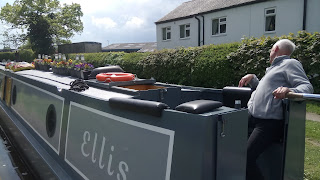 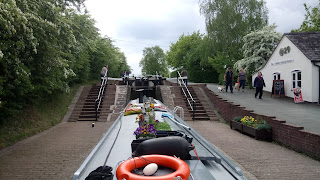 After Grindley Brook, we stopped off for a fill with water and then (a bit farther on) found a pub for a craft pint - we're getting into "real Ales" now and have worked out it's 2 quid a round cheaper than the usual lagers we'd been drinking... ergo, the more we drink the more money we save... RESULT eh?

I must say, the "flow" of water on this canal is quite apparent at the lock by-washes and going under bridge holes... if you're not careful you end up half way under a bridge treading water ad barely moving... you've also really got to be brave and power past the washes on approach to the locks.

Having looked it up - apparently, some 12 million gallons of water makes its way down the canal each day Hurleston Reservoir. 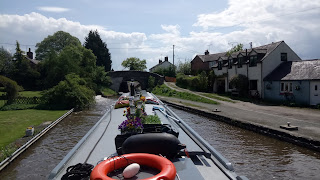 Some of the lift bridges too take an awful lot of effort - it must really wear out the single handers... 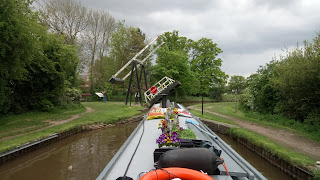 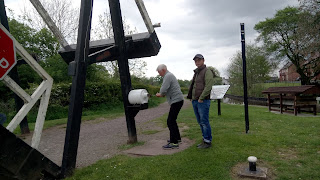 you can see how exhausted Andy is here just watching Richard doing the winding!!!

That's been in for "nice weather so far" - I've been spending many a cold hour chugging at the tillert whilst everyone else kept warm and dry inside...  it's ok - no point in everyone being cold and wet.

We've now made to the outskirts of Chirk so today we'll go through the tunnel and over the aqueduct in preparation for tomorrows planned transit of the Ponty what's it's name?... before heading in Llangollen for our final 2 nights together.

That's if I live of course!

Ohhhh manflu!!! I hope you recover!! Lovely pictures and good coverage of the Llanny. Hugs to you both,