Another bereavement ... 2 sets of guests... a catch up and Rochdale canal here we come!

I've had a few emails and messages "complaining" that the blog is long over due an update.

It's not without good reason...  there has been a lot going on this end - I know it's a boating blog but when we're out and about boating with guests on that require more ... lets call it "input" from us than others, time for relaxation  (which really IS what the blog is for ... for me certainly) get's eaten up doing other things and then the next thing I know, it's bed time or time to begin breakfast.

I'm not having a moan here btw... it's just how it is sometimes.

When I wrote the title, I HAD planned to attempt to update our journey from the bottom of Barrowford Locks to  this morning - Lemmonroyd...

Alas, having sat down, checked the forecast (rain etc) and realised we could do with getting the river sections out of the way and back to Wakefield asap, it's not gonna happen now.

There's a lot to update on- the short version being the gluten free veggies were great fun and we had  a blast with them...  then, when they left, Andy's parents joined us (missing his aunts funeral) and whilst they were here, his uncle died - (I'd hoped they'd postpone their trip ... assuming they'd go to the aunts funeral) but they needed a break so came along as planned.  The whole trip was filled with phone calls from the care home the uncle had just gone into and then the sad news came he'd died.

I'll not lie.  NONE of this was good for anyone... and certainly not for me given how fragile and bereft I remain following mum dying.  None of us were in a good place and they have now left to make arrangements etc.

We had a couple of days in Leeds and are now heading back to Wakefield to prepare for our next guests and our trip over the Rochdale which begins on Friday - ASSUMING the rivers don't mess things up.

I'll come back to this and do a proper posting hopefully soon - if not, expect to catch up with our progress as we head over the Pennines once more - hopefully with a bit more water than last years thwarted attempt lol 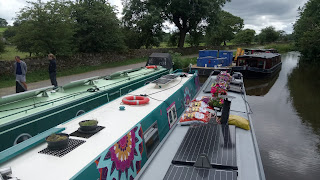 I guess you are not the last to discover that the hospitality business (especially when you are the hands on owner) is a 24/7 activity. In this country you can at least have some sympathy for those who live in parts of the world where it is 24/7/365 as well. On the canals you can take a break when the winter closures are in force!