Hanging around for a while, 2721 hours service, a bereavement and Vegans to the rescue!

Cheery Tree briefly for an over night as our guest departed.  Once she was out of the way safely on her way home, we pulled ropes and headed off towards Riley Green - our plan being to spend a night there, do Laundry and then head on to Johnsons Hillocks (well down them actually and turn) to fill with water and have a pump out.  The original idea had been to head down, kill a couple of days and then head back up - stopping off at Riley for said pumpout... alas it dawned on me we'd be coming back up on a Saturday afternoon and might not be able to get pumped out - ergo, I did a self pump on the way down - the "poo pipe" at Johnson's NOT being long enough to reach the starboard bow when coming back the other way.

Rewind a bit though, and on route to Riley from Cherry  Tree we spotted the first wild Deer we've seen in ages... if you have really good ideas you can see it looking back at me as we chugged (quietly passed it)... 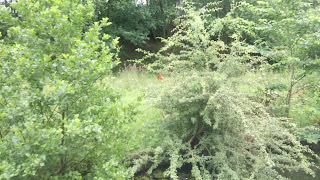 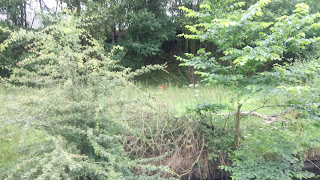 Having arrived at Johnson's Hillocks and began pumping out, I spotted across the way, another boat I know the name of "Bagpuss" - yes - "she's a Bickerstaffe"... good looking boats without a doubt.

The owner (who's name I can't recall for toffee) came over and started chatting - he' reads the rubbish I post on Twitter but hadn't (as yet) taken offence at any of it lol.    IT's had to believe the boat is 5 years old - She's beautiful. 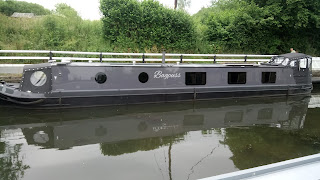 After the natter whilst our "poo pumped out", we began our way down the locks and moored at the bottom for a couple of days - Motorway noise in the distance a side, it's quite pleasant and if you like a walk, it's only 6.5 miles return into Chorley... which it turned out is quite a nice place to wander around.

As the weekend was approaching (think party boat) we headed back up the locks and managed to tie up on the 48 hour mooring just at the top... WHERE I decided was as good a place as any to do the 2721 hour engine service - Both engine & Gearbox oils, Pre & main diesel filters, air filter along with checking tension of belts etc... everything was fine but I still maintain there MUST be a better way of designing the sump bung on the prm gearbox...  it's in SUCH a ruddy difficult place to reach! 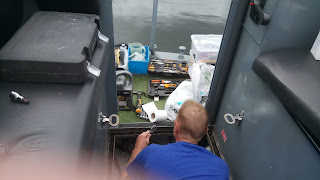 AS I was buggering around in the engine hole professionally completing said service, I heard a voice saying hello and looked up to See Ian & Ali - well I know now that's there names... at the time I was thinking "who the blooming hell are these two?" - we'd bumped into them down at Etruria heading up the Caldon a few months ago and have chatted on the boating forum.  After a bit of a natter they invited us to tea (that's dinner/supper if you are not from up north) later on and although we didn't have anything on the to take with us, found a couple of bottles of plonk and accepted the invitation. 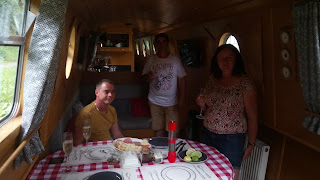 They were great hosts and despite us both committing the boating faux-pas of USING their toilet (it was WAY too far to walk back to our boat (they were at the bottom of the locks and us at the top) we had a thoroughly enjoyable (if a little boozy) evening.

Unfortunately, whilst we were there, Andy received a message to say that in addition to his Aunt dying earlier in the week, his Uncle (the one we went to visit after my mum's funeral) had also taken a turn for the worse and was heading into palliative care.

Andy decided to book a train ticket the following morning and head off down to Wolverhampton to support his parents..

That left "Ellis" (and me) with a bit of a problem - the prospect of new guests joining us and having to work up Blackburn locks on my own with them (if that's not a contradiction)...

To contemplate a plan of action, Ian and Ali knocked on and suggested a lunch time pint in the Lock so off I went - ignoring chores lol.    THEY were heading this way and offered to come with me to work the lock and train the passengers... so that was a back up plan.    WHILST we were sitting in the pub beer garden, I spotted a "ginger" I recognised appearing lockside...  it was Frankie off "NB Forever Changes"... with her husband Greg.  It turned out they were also heading to Skipton and offered to come along the following morning to work me through the locks too.     So that was that sorted.

I chugged off at tea time and moored for the night just outside Cherry Tree again  - I needed to stock up on veg etc when Sainsburys opened to it all worked out quite well.  The guests arrived as planned and with Frankie and Greg now moored behind, we set off and began our way up through the locks.  Never let it be said that Vegan's are weird - I mean they ARE in general but those two are great fun so we won't hold it against them!

As it turned out, Andy had gotten on a train back and about half way up appeared canal side and joined in..   We chugged beyond and ended the day on the "nice bit" between Rishton and Church - THAT turned into a bit of a late night sitting under a blanket out the back with them two whilst Andy and I drank too much.  Our guests having gone to bed at a more sensible time!

Next day I even managed to get rid of my waste oil responsibly too... 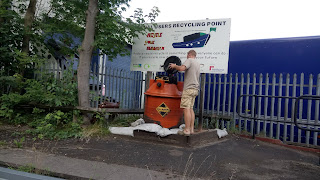 Now we're heading on to Skipton for the weekend.