Just when you think you're settled on a decision, something comes along that makes you re-think... (again)...

You'll remember, the engine that comes with the boat is a Canaline 38. 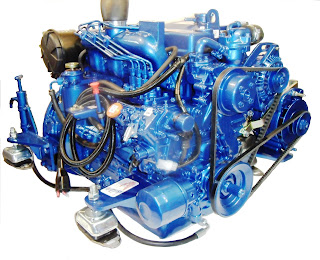 This is a good basic engine for the size of boat we're getting... not too big to guzzle fuel and push the boat along nicely in most conditions.

With the "38" came the standard prm 120 mechanical gearbox that I'd had a sleepless night over, so I'd addressed that by ordering an upgrade to the 150.    What I didn't know was a limitation of the 38 being the maximum size of 2nd alternator it could handle.  I think this is somewhere around the 90/100amp mark (specs have changed since we first looked into it).  Now, given we've increased the battery bank from 400ah to 540ah, you have to have some way of stuffing this power BACK IN.  I'd assumed at some point we could fit a bigger alternator but apparently not.

How do I know this? - well, back in the summer when we took Andy's nephews on a boating holiday from Skipton - after a miserable wet few hours the first afternoon/evening, we finally moored up and wandered off to the pub for tea.  Upon our return, the boat we'd palled up with for the locks had gone - we thought it a little strange as they'd been having a rough time and were very relieved when I'd spotted 2 spaces for us earlier on.  Hanging out of the side hatch of the boat now moored where it had been,  were a young couple looking a bit miffed.  I'd had a couple of glasses of wine and was being quite chatty with them as they were clearly on a sail-away boat,..already doing what we planned to at that time.  As the conversation went on, it transpired we'd stolen their long term mooring - they'd only nipped off to get some water and on return found 2 boats in their space... the others, because they were in, had moved away when asked but given our absence, they carried on with their evening.

As we chatted about their boat, them still a bit narked but lovely none the less, it came out they'd got theirs from the same place we were originally intending to.    They didn't ask us to move and I think weere quite relieved when we went in for the night -  I can be a bit chatty after a couple of sherbets.

Anyway - me made a note to call back in on the return journey to drop off a bottle by way of an apology and thank you for not forcing us to move off that evening.... On doing so, I left my email address and the offer of a spare solar panel.

A while after, I got an email from Matt, thanking us for the wine and declining the offer of the panel.  They sprang to mind on boxing day when the floods hit and the other day I emailed him to see if they're survived ok - and to update them we'd finally ordered OUR boat.

I got a lovely email back from him yesterday, with their thoughts on what they did right/wrong.  Matt, specifically mentioned the engine upgrade as being on their list of regrets - mainly due to the alternator size - the 42 comes with a 175ah unit... 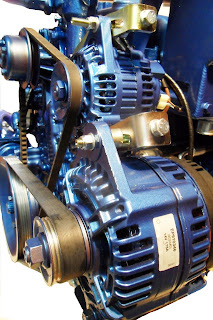 which can obviously stuff a lot more power back into the batteries in less time... less engine time means less hours on the clock and lower servicing costs.

That sent me thinking about how much extra diesel the 42 would use over the 38 - after a bit of googling last night, I found a spec sheet and it turns out the 38 uses 0.7 litres  per hour at 1400rpm and the 42 1.00 litre per hour at 1400rpm. So at current prices about 30 p an hour more to run.  It does however increase the cost of the boat by another £1000 - I think we can probably afford that so I emailed Chris last night to ask for the bigger engine - I've just had a reply confirming he's made a note of it.

So that's that then.  Less time to run for charging purposes AND a little extra power in reserve for stopping/fighting river currents..another example of the goodness/helpfulness of boaters.  Thanks Matt!

Oh one last thing, it comes with "the deluxe control panel"...  hmm... I'll try not to get TOO excited about that bit ;-) 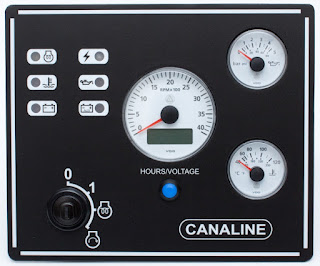