We can't avoid this conversation much longer folks - the time has come for the 'Toilet discussion' ... well when I say discussion, as the comment function on here is a bit temperamental, it's more of a soliloquy - no matter lol

Right then... for those of you who don't know, boating and toilet talk go together like rhubarb and custard.  The other day, when aboard Mick's boat, within seconds we were talking about his pump out toilet and how he'd rather the boat had a cassette..

Toilets on-board come in 3 forms:  Pump out, Cassette and of late, composting.  There can be slight variations on each but they all follow the basic description

Let's start with pump outs.   As the name suggests,  these are basically a loo that disposes of it's contents into a holding tank somewhere on the boat... which when full, gets "pumped out" ashore.

The pump out, comes in 3 main guises too:

The Macerator - which contains a pump and cutting head which chomps it's way through whatever is put down it. 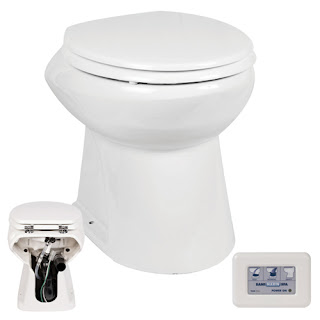 This is going to be our "main toilet - if you're a bit nerdy, feel free to watch their lovely installation video on you tube - it's just over 6 minutes of your life you won't get back but they do make it sound very glamorous...


As well as the macerator pump out, there are also 2 others; the "dump through" - which is a simple as it sounds - the loo it'self sits directly ON the holding tank and the waste drops through into it.  These are simpple, usuallly unblockable and do have the advantage of the user being able to see through when the tank is about full - the down side, ALSO being that you CAN see in when it's about full...  NOT for the faint hearted. 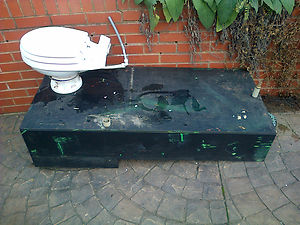 Sorry it's not the best photo - I stole it from another blog but you get the idea... loo sits over a tank and you usually depress a lever with your foot which turns a balll around to open the bowl to the tank and hey presto - gravity does the rest.

The other pump-out kind, is the "Vacuum" loo:

These are like the ones installed on planes and cruise-ships.  We quite like the idea of them as they use less water to flush  - which would mean less pump-outs and less wasted water from the freshwater tank... they are however a bit more expensive (there's a surprise) so our old friend "compromise" has come into play again and we've settled on the following kit from Sanimarin:

We may get lucky at Crick show and find one on offer but for now, it's on the "wall"!

Cassettes are simple - they vary in form but basically it's a reasonable sized plastic bowl (sometimes ceramic if you want to spend more) that sits over a removable cassette.  When the user has finished, they pull a lever usually to allow the contents to drop into the holding cassette beneath.. I think I'd be inclined to open it before I do anything to reduce the effort of the flush .  This is the one we're having as a 2nd loo: 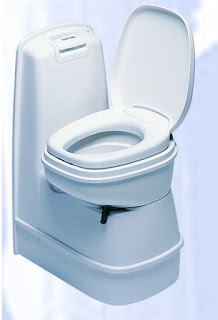 There's a video file here: Thetford
which might be of interest...

I suppose  the main advantage of having a cassette type is that it's free to empty them around the system... (pump-outs incur a typical cost of around £20 in the north - more in the south) and also, if you get frozen in somewhere with a full loo, you can at least trailer a cassette along the tow-path to the nearest emptying point...most people carry a spare one which we'll also be doing.  The downside being that you have no choice and end up getting rather close to the contents of the cassette when emptying...  I'm told if we ever  use it for more than number 1's, that will be my job... - no pun intended!

The final option is the 'Composting' toilet... 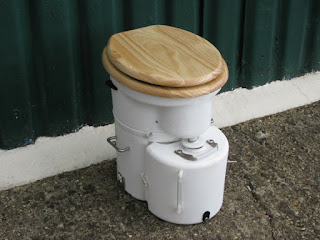 Basically, the unit is designed as such, to keep the solids and liquids separate - the liquid is then poured away whilst the solids begin to breakdown in the "bucket"underneath ... apparently if fitted, and used "properly" they DON'T smell and take about 3 months to fill - at which time you need to be able to store a bucket  somewhere for about 6-9 months before the compost is finished...

Some boaters swear by them and they DO offer another FREE way of  handling waste...  we don't think they're for us... not yet anyway... I'm sure as we meet more and more boaters with them, we'll become more enlightened!

Crikey - this has become a long post...who'd have thought taking a crap  visit could be so involved?

Email ThisBlogThis!Share to TwitterShare to FacebookShare to Pinterest
Labels: Pumpout verses Cassette... or both!