A View of our mooring...

We've had a flying visit this weekend from Andy's parents.  They came down to see a John Godper production of "Shafted" with us last night at the Theatre in town.
This morning after they left on their house-hunting mission, we took a drive up to the mooring  (with the roof down as the sun was shining for a change) and had a walk along the towpath to try and identify "berth 15"...

Our initial thoughts were that it was this one: 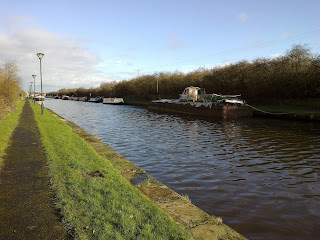 or rather the gap between the ugly "work in progress" and the other one...

Having re-read the paper work from CRT, a little bit further down, we spotted a named boat moored up and we "think" it's actually the gap can see here: 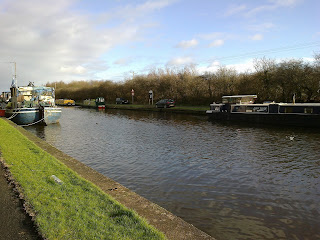 This one is a bit further down towards the pub and ignoring the view that is moored opposite, should be ok for what we need.  It's not like we are going to live there.

Hopefully, by the time the boat is ready, there'll be something a bit further along that comes available so we can move down.

We took a walk around and over the bridge down to the mooring itself and it was good to note the presence of proper mooring rings in the concrete.

I'm rather pleased about this because yesterday, in the post from Midland Chandlers, these arrived: 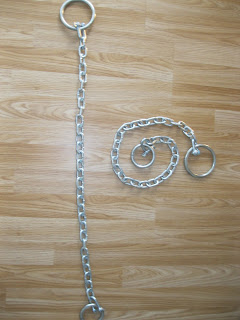 We'd not seen them until our last holiday down in Warwick, when just about every boat we saw was using them... given the high winds, they made for a much more secure mooring against the pilings - and reduce the likely hood of someone cutting your ropes to set you adrift in the night - I suppose the theory being they're less likely to want to lean into the cut beyond the length of the chains....Either way, I'll feel happier with the boat tied off front and back with these through the rings.

A bit early I know but it is nice to be collecting things ready for when it arrives.