Something I've been putting off doing for ages is our energy audit.   That's just a term given to describe the calculations involved to work out how much power/energy we'll probably use each day on board 'Ellis'.

Initially, we'll use her as a weekend and holiday boat.  Longer term however, we DO intend living aboard full-time (renting out the bungalow to cover it's own costs) whilst we save up for our YEAR OFF!

So, with that in mind, my "sums" assume we're there all the time,


You may recall, our battery bank was initially planned to be 440ah... but on order, we increased it to 540ah.  Using the above calculations, that only leaves 32.44ah "spare" each day in the kitty... and THAT assumes we start each day fully charged! WHICH of course we won't.....

This is not good news!  Now, OK, you could argue that not all of that stuff will probably get used to the extent quoted each day, but it might.

What writing it down HAS done however, is made it crystal clear we need to re-think the battery bank capacity...AND try and become less power hungry...AND set up a good charging regime through a combination of engine running, solar panels and perhaps a generator to keep engine hours down.

IT is of course a worse case scenario and I suppose before we spend a fortune on "stuff" we should suck it and see.  The upgraded engine already comes with a 150amp second alternator which is a good starting point AND does at least mean the washer should be OK when it's running.

I've also been playing around with solar panels for years - making my own from cells bought in Germany... Apparently I'm NOT allowed to stick any of these on the boat but they were only ever a prototype anyway 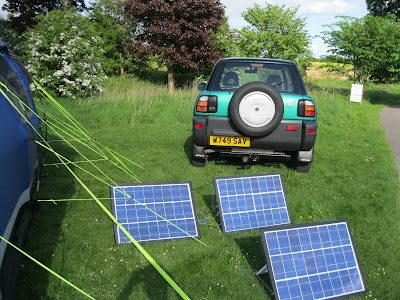 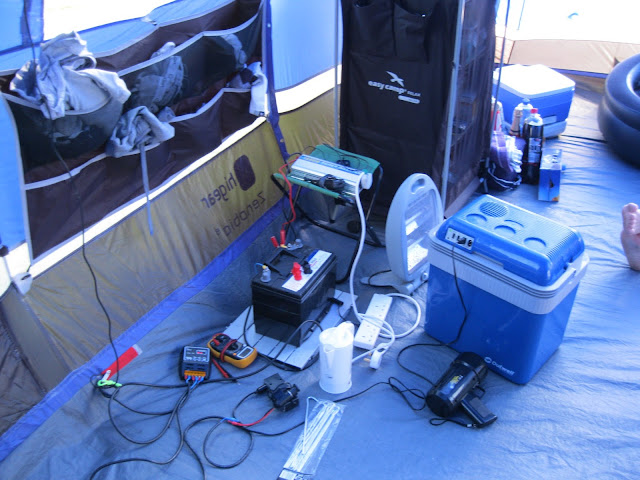 You may notice the little solar charge controller on the tent floor - it was only a cheap one from ebay but it did the trick - the 400watt halogen heater could be used for about an hour before the inverter began screaming but it was safer than the aforementioned gas fire that nearly killed us.

oh heck - I've gone off on a tangent again.

SO - to summarise: we need to use less .... and store and generate more power!