Today I've had the most unpleasant task of clearing out a flat I rent out.  Tenants are a pain.  Not all of them, but over the past 10 years or so, from time to time we get a bad un.  In today's case, what started off as an angry feeling on opening the door, soon turned into a feeling of sadness for the wretched soul who lived like this 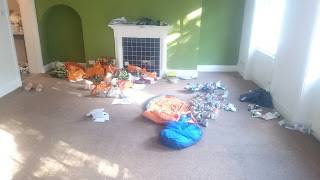 The photo doesn't look too bad I'll grant you but what you can't see is the vile smell of vomit and maggots... Vomit either side of the sleeping bag and maggots worming their way through decaying food left in the kitchen.... the pupa with their horrible cargo waiting to emerge or the swarm of adults that awaited me .

As I went through into the kitchen - trying NOT to wretch, I was met with this 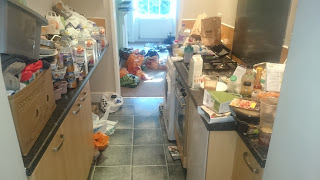 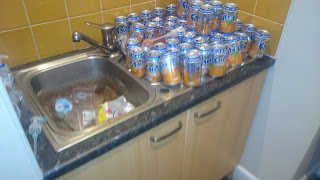 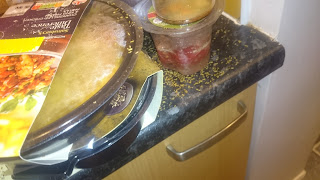 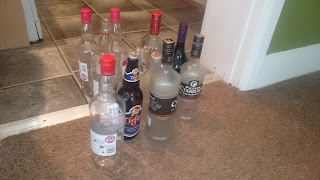 THEN it all made sense.

People have their demons I know - I've got mine... but for the most part, I wear them on my sleeve and that way, (I feel at least) those around me can help and support if they feel so inclined.

The woman who lived here, to me at least, simply seemed a bit highly strung but appeared to all intents and purposes "normal".  She' was highly qualified - (compared to me anyway) with a phd in economics and had been a lecturer at Leeds Uni at some time or other.    She'd given her months notice on the right day in June which expired on 24th July... hence me going in to take a look having not received the keys back or being able to get in contact with her on the phone.

In amongst the clutter, were piles of personal and financial paperwork.  She has been keeping up to date with her bills, receives various benefits, has a good bank balance - although she HAS left credit and debit cards in amongst the detritus.    Some of the bags contained Marks & Spencer food items - un opened...  the fridge also contained lots of what we'd class as posh food - dated May and mostly mouldy.  At first as I filled the bin liners full of decaying food I was angry with her.  Angry she could leave such an awful mess for someone else to clean up after.  Angry that whilst I'm out at work doing silly hours each week, she is off up and down the country on "days out"  (evidenced by train tickets) and bags containing expensive chocolates and the like.

As I then moved on to paper work  (I'm saving you from the gory details in regards the aforementioned crawlies and flies) her wretched life began to unfold in front of me.

Being careful NOT to discard any paperwork, I put it all in a separate bag as I went along.  To cut a long story short, this woman is in and out of A & E regularly with unexplained vomiting...  she had prescriptions laying around for various anti-depressants & stuff for panic attacks (I had to google them), acid reducing drugs, beta blockers etc. ALL at quite high doses - one I recall I took for a short while was the beta blocker Propanalol - I was only taking 10 mg 3 times a day which made me quite zombified... she has 80 mg 3 times day.

Along with the medication, were numerous - in excess of 10 different appointment with various departments at the local hospital... letters from gps, consultants, referrals, scans, bloods and eventually I came across a summary from her most recent gastroscpy - basically saying there is nothing clinical to explain her problems and suggesting the mental health team need to see if they can help.

Basically, she is causing her own problems as you can see from the highly acidic nature of what she eats/drinks - and that is ignoring the vodka.

The amount of care and attention she is "needing" must be costing the poor NHS thousands... and that's just 1 person.

If someone were to take a more holistic approach, most of the testing could be avoided.  She NEEDS help.  Which leaves me with a dilemma.

Whilst I know it's not my place, SHOULD I contact her gp practice and talk to her doctors to give them the background to how she is living? ... so perhaps they can help her? - if for no other reason than to save their budget a massive amount of money.  It's no wonder I can't get to see my GP  with the likes of her taking up so much of the resource... oh I know they won't tell me anything about her - I don't want to know... but if I can help them to help her, surely that would be a good thing?

On moving a box of "stuff" out of the kitchen, Once the flies had died down (I've sprayed 2 whole cans of Raid in there today - working out it was best to move a bit, spray, stand back then move a bit more) I spotted some old photos and various DVDS... the photos had dates of 2002 on them and there she was looking happy as Larry with friend and lovers...  on a trip to Belgium (I recognised a few landmarks)...   The DVDs and photos filled me in with a bit more info about her life - in short, lesbian interest DVDs and photos of her in loved up embraces with a woman.

This set me pondering - is that what's led her to where she is now? - self loathing or a failed relationship?...  all speculation of course but if that is the case... what a terrible result and life wasted and for what? - never coming to terms with who or what she is?

I thank my lucky stars our lives didn't go down the same path.

Also  among the papers, were letters from her previous landlord before she moved in with us, charging her circa 1500 quid for "Dilapidation correction"... along with receipts which proved she'd paid so clearly this has not been the first time she's done this.    I'd recently given her a reference confirming she'd paid her rent on time and not been any bother etc...   having not had reason to venture into the property, I genuinely did feel all was OK at that time.

DO I now, get in touch with her new letting agent to warn them to keep a close eye on her to avoid this happening again? - I mean, the new landlords (and I note she's paid 6 months up front with them too like she did with us) might NOT be able to rectify the mess she leaves as easily as I have been able to today and end up incurring costs they can't afford to pay.

The sick stains btw, HAVE come up after a couple of passes with my old Vax carpet cleaner and whilst there's another day cleaning in there, nothing is permanently damaged.  I could have asked someone else to do it but to be honest, that wouldn't have been cricket - Gav at work would have come in to help but it was a totally unpleasant job and not one he's paid enough to do - come to think of it, neither am I but there we are - the worst of it is over... and I've gone from being angry with a tenant, to feeling sad about the misery endured by a fellow human being.

In other news - yesterday at work I gathered up a few off cuts of timber from the track we're making (photos of that to follow once we lay it down) and made a quick set of steps for the rear of the boat. 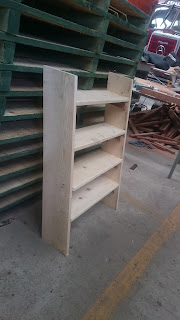 They're only a prototype but will do whilst we're working on the boat - I'll make a "proper set" with proper measurements when the fit out is nearly complete... meanwhile, these'll do for now - they're actually quite sturdy for a 15 min job too.

I still can't decide whether to contact this woman's gp or not - what would YOU do?

I think I would contact her G.P. Perhaps pass on photographic evidence of the flat, and ask if she had an appointed social worker to whom the paperwork etc could be sent? That way, at least two people whom deal with vulnerable adults have been informed.
At least then, you know you have tried too help. Hope she does find the help and support evidently needed.

A very hard decision. I suspect that the GP will have an suspicion of her chaotic life, or he will if he's any good. Amazing though that she manages to pay all her bills etc. I think I would contact the GP but keep it fairly brief, and then leave it. You can't, neither can the authorities, force help on people who won't accept it.
I'm very impressed that you cleaned it all up yourself, well done you.
Kath (nb Herbie)

You're clearly a caring person, l think you know you want to help, you don't really need to ask. I would also contact the new landlords, things will probably only get worse for someone like this if they don't get professional help. Paula