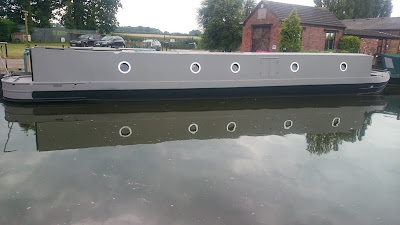 To walk you though the porthole positions left to right;  No 1 is over the single dinette,  No 2 is over the kitchen sink, No 3 is in the lounge over a chair, Side window also lounge with door to bathroom directly right,  No 4 is bathroom and No 5 is the over the centre of the bed... which apparently we may regret in regards condensation drips!

Ideally, they'd have been spaced equidistantly but that would have placed porthole No. 2 inside a wardrobe...  I'm sure once we've got the name on the rear panel, they'll look OK.. if not, we'll do something arty between 1 and 2. or perhaps place some trailing plants on the roof to hang down the side. 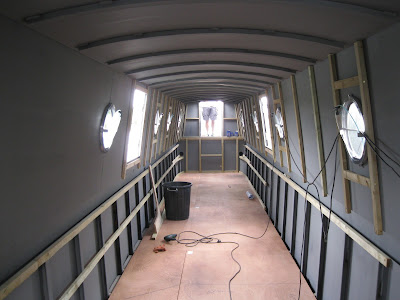 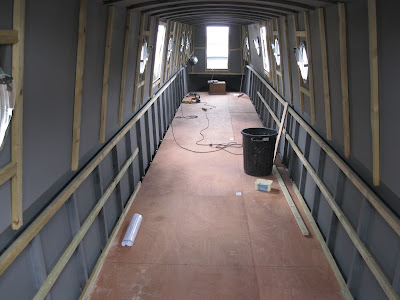 Chris (the boss man) introduced us to Paul the joiner who has already started attaching battens ready to fit the lining to.  We walked through the boat with him and marked the positions of the planned bulkheads...  10 in all.  It's apparent from the lounge area, that it's going to be very snug in there - we'll see how it feels once it's lined out ... we can always lose 1-2 ft from the planned kitchen to increase the size of the lounge if it does feel too small.

The position of the portholes and side hatches has worked out well though with much more light in there than we'd thought - especially once the hatches are opened. 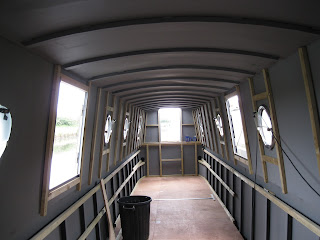 Btw - I caved in and agreed to have BOTH side hatches glazed.  Luckily we're only paying for one of them though as a dear friend is buying the other as a boat warming (literally I suppose) present.  500 quid is a lot of money for a 2ft square bit of glazed window but Andy was right....  it will make the sitting area much more pleasant... especially during the winter months...AND in the worst of the weather, we can close the metal shutters on the outside too to keep in the heat.

Yesterday's viewing was not all plain sailing if you'll pardon the pun - there's a couple of dents/deformed areas in the roof that stand out (to me anyway) like a sore thumb.    You can't really make them out from these (poor ) photos  - in fact, Andy didn't spot them but they are there none the less - about dining plate sized indentations in the roof just in the bathroom area.  Chris doesn't seem too worried about and said he'd already arranged for someone to sort it out. 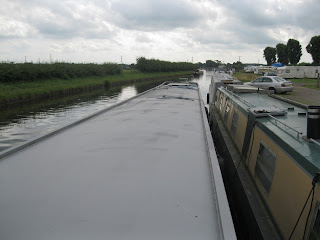 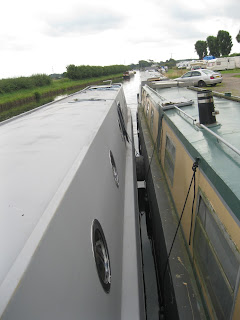 I suppose it could have been done by the hook on a crane or whatever in the workshop and maybe it wasn't noticeable until it was out in the daylight... it'll get sorted.

Another potential issue was also  identified in regards the roof...  slap bang where the flu for the Morso is planned to go out, is one of the tubular roof bars.  I know we could cut into it but doing so would mean weakening the structure ... SO (and I hope this IS possible) I've asked that when they are sorting out the dents, they remove said bar and weld it back in 5-6 inches further back - in fact, as close to the bathroom bulkhead as possible.  I'm not sure this will happen so I may end up bringing home the plasma cutter from work to cut into it when I fit the chinmey collar in a couple of months... fingers crossed on that one! 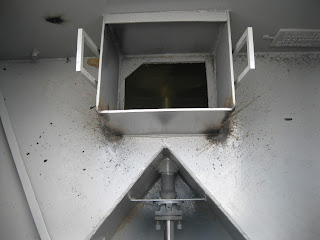 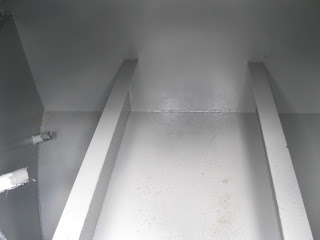 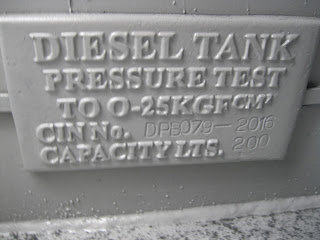 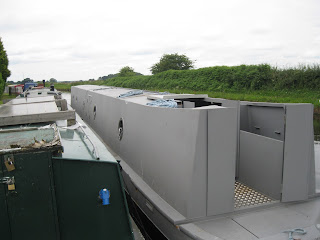 You can see from the photo of the rear, the higher than normal lockers we requested.... I had a quick sit on them and it has made a difference to the view over the boat...  such a simple modification but one that will make chugging along a more pleasurable experience. 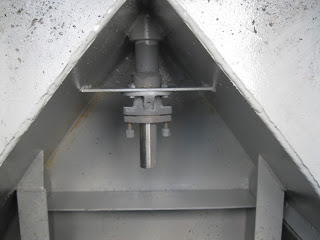 Close up, the welds don't look too shabby either which I'm pleased about... I'm not a brilliant welder myself but I'd have hated it, if their welds looked worse than mine do lol. 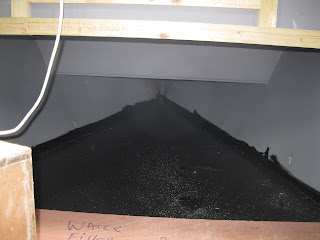 To maximise the size for the water tank, we've agreed to have the water pump in the bottom of the wardrobe to the right.  This will buy us a valuable few inches extra for the tank and increase capacity by somewhere between 150-200 litres - which in turn will reduce the number of visits to the water point.


All in all, we're pleased to finally have a boat... all beit one that's a few months off being on our mooring.  It's been a struggle, saving up for the last 6 and a half years... but the end is in sight - or rather the beginning is in sight I suppose!

It's hard to tell from the following photo whether Andy is pleased  or not - I'll let you make your own mind up! 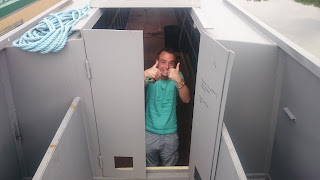 Congratulations guys, its looking great, look forward to seeing pics of the fit out soon!

Nice looking boat. It's interesting to see how they are battened out etc. Who's the builder of the shell?

I'm not 100% who the shell was produced by to be honest... Reeves were mentioned but I wouldn't stake my life on it. We know it's not Tyler Wilson as in the end our finances wouldn't run to it so (to quote my mother) we "cut our coat according to our cloth" lol.

Fantastic and thanks for reply, from what little I know Reeves are a good boat builder. To quote my mum " Mother knows best " so definitely the right choice. Looking forward to future updates and good luck. Jon

I notice your web address ends with [.jp].
I wondered if we were not the only Japanese / English couple dreaming of a life on a narrow boat.
We will follow your posts with pleasure. Matthew.