Conscience cleared... and a shiny tap!

At the moment, my head is SO full of random boat (and I suppose 'non-boat') related "stuff" that I'm finding it hard to organise things into any logical order.  Not the end of the world I suppose and I'm sure it will be a temporary phase - I hope so at least.  The medication I'm taking is making me rather short tempered... perhaps even a bit aggressive.  Not physically so but my patience is at an all time low and 'snappy' doesn't even come close lol.

That said, in amongst all the piffle , on Friday morning I did make a decision re. the recently exited tenant... I called her GP practice (also mine as it happens) and discussed her with the practice manager.   To give her fair credit, she said she was taking notes and we agreed I'd email them the photos I took of the flat AND  that on Monday morning, I'd pop in to drop off the "hoarded" medication -(some of which dated back to 2004) and have a chat with whichever doctor was available when I turn up.  I know they can't discuss her with me - to be honest, from the paperwork I've seen enough of her dreadfully troubled life to write up my own version of her case history as it is... anyway - I don't want to know anything from them... just perhaps, fill in some blanks for them.

Sometimes when you can't decide what to do, doing nothing is the right thing.  This was one of those occasions when I couldn't leave things ... in fact, I was awake thinking about the wretched woman at 2.50 on Friday morning.  I know it might be seen to be interfering - and I hate it when people do that as a rule but on reflection, my conscience has settled and even if she doesn't appreciate the interference (she may well never even know anyway) her life MIGHT begin to stabilise if she gets some help.

It would be nice to say that puts an end to this particular saga - However, on Friday afternoon I got a phone call from the office to say this woman had turned up wanting to know where her "stuff" is.  Apparently she was apologetic for not having cleared the place out and offered to pay an additional weeks rent and any cleaning costs.   It's reported she was sitting there, trembling and clearly not in a good place.    I explained that anything covered in maggots had been disposed of and her personal papers, clothing items and a couple of other salvageable boxes were left in a trunk outside the flat door.   I presume she'll have collected what she could and will find out tomorrow morning when I nip in to do a bit of painting...  I hope she has left the boxes of meds. - so I can at least take close up photos of them... in case the doc thinks I'm the one making things up!

ANYWAY -  back to boaty stuff.

You may remember a few weeks ago, I got a good deal on the "touch-lights" from Aten lighting (http://www.atenlighting.co.uk/led-touchdownlight-white-recess-flat.html)  - When they arrived, I put them to one side. 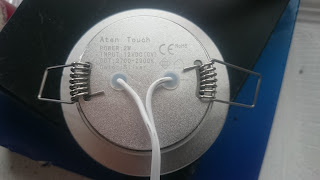 The other day, I thought I'd take one out and test the power consumption.  They purport to be 2 watt. 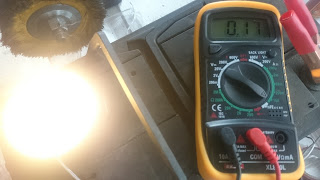 Btw- if you're in the market for some "touch- DIMMABLE" ones (ours are just the touch ones) they are doing a deal at the moment when you buy 5 or more down from 13.99 to 10.99 - I've no affiliation with them, other than being a satisfied customer.  They're here if you fancy a look http://www.atenlighting.co.uk/led-recess-touchdim.html .... they do use a little more power at 3watt each so that's worth bearing mind.

ALSO  this week, we found a kitchen sink (shallow depth) on offer at Wickes (20% online discount) AND by phoning them, I was also able to use my normal 10% trade discount ... so that was another good saving. 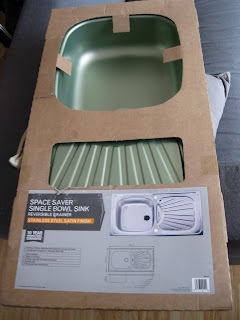 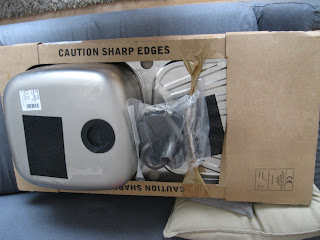 Its not the snazziest thing in the world but it does come with a waste kit and is quite slim at only 435mm wide.  It'll be fine.

I also spotted a tap on offer in screw fix when I was buying some stuff for work,  which we both actually quite liked... I've learned that when we DO agree on something, it's best to get it there and then! 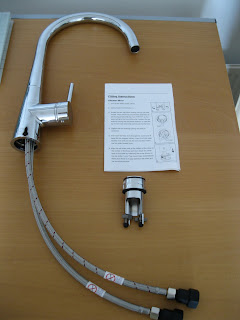 It's high enough to fill a kettle without dunking the base in the (usually full) washing up bowl.  I did have a bit of a worry about operating pressure - it has a sticker on the box saying MINIMUM operating pressure of 1.5 bar...  I have no idea how powerful the water-pump the builder will be fitting is.  LUCKILY - we are fortunate to have made friends with a really helpful couple who bought a boat last year from the same place and they were kind enough to look at theirs to confirm it's rated at 25psi (1.7bar)...  A bit close but fingers crossed it will work... if not, this tap may end up replacing the one at home!  One thing that is good about it though (aesthetics a side) is the mounting method - FROM above rather than below.

One last thing (we're heading out for a Sunday morning hike) -  Andy took a video of our first walk around the boat last weekend on his phone.. I've uploaded it to you-tube rather than here as it was quite large.  It's a bit shaky but it will be handy to look back on when the boat is finished.