Since my last visit, I've been consulting those in the know *read: asking the collective on http://thunderboat.boards.net * and although the original plan WAS to get a Morso Squirrel, what with one thing and another, we simply don't have enough money to be able to.

SO instead we're going to buy a Steel rather than cast iron one from here:http://www.gr8fires.co.uk/gbs-mariner-4-kw-multi-fuel-stove-6209?utm_source=CJ&utm_medium=Affiliate

It's quite a contemproary looking little thing and (one review a side) seems to be well liked.

Using their "what size stove calculator" as a guide, it should be more than enough to keep the lounge toastie and rest of the boat reasonably warm - the calculation came back at 3.3kw required and it's a 4kw stove.

With it being all steel, at least there'll be no risk of it cracking when I drill holes in the feet to mount it to the hearth.  I'd planned to weld a few plates together with raised edges and bolt them into the hearth but that wouldn't have secured it against vertical movement.  I'd thought that they'd be enough, but on chatting with our local BSS examiner (who, incidentally seems a really decent/helpful and normal bloke) he pointed out it does need securing fully so that in the event of the boat being snagged in a lock and ending up at some awful angle, a stove full of burning fuel doesn't get tipped into the boat ... point well made and understood.

We'll still have to go for the twin wall flu which is a shame both aesthetically AND financially but we may as well do it to the Higher BSS rather than Private boat specs the first time.  We may still end up with a Morso Flu kit but at £477 just for that, I'm looking into diy alternatives...  There's a little ambiguity in regards whether they HAVE to be twin wall but the BSS chap (let's call him Charlie  - as that's his name) said the main difference between the Private and Non-Private BSS is there are NO advisories in it - ergo, if it's advisory in the Private - it should be taken to be compulsory in the public if you follow.  .

No matter - Charlie is perfectly happy to advise on the build as it progresses and his examination charges are quite reasonable too.
It's funny how I'd built up the BSS thing as a major worry originally... daft really as on speaking with him,  I feel much more comfortable now... AND relieved not to be going down the silly RCD ( Recreational Craft Directive)  route!

In other news, I had nerve conduction testing on Monday at the hospital - quite a weird experience.... uncomfortable but not painful.   I was hooked up to a device that passes electric currents through the nerves in my arms and hands to test the response times.  I've been having problems for about a year or so - mostly at night and when driving.  The nurse doing the testing said the consultant will be looking over the results to suggest the best treatment and letting my GP know.  I'm a firm believer in surgincal intervention where necessary and would rather have an operation to deal with the problem (and thus recover) than muddle on for ages trying less invasive methods, THEN ending up with the operation anyway.  We'll see what they come back with.

Oh I nearly forgot, ROOFING! - when I came in from work today, this is what I saw of the house behind: 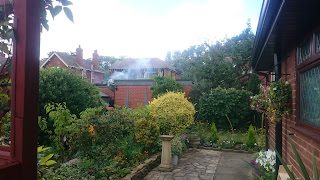 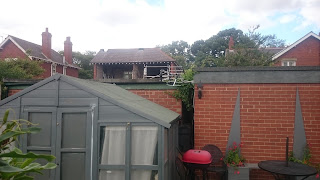 WHAT is holding this roof up is anyone's guess.... there's buggar all in the way of support for the entire back roof.   It's being converted from a decent sized 3 bedroom detached into a 5 bedroom, 5 bathroom monster...  lovely and quiet when I want to lay in the hammock and snooze after work - NOT!